Plot:
Instead of going on a vacation, Connie (Frazee) and her singing group decide to take a job working on a ranch. When the girls arrive, Steve (Starrett), the owner of the ranch, is about to enlist in the military and he’s angry that the new ranch hands are women. The ranch is transformed into a canteen to entertain troops.

Trivia:
• Working titles were “Close Harmony” and “Barnyard Canteen.”
• In Sept. 1943, Shirley Ross was announced to star in the film. However, not long after, news briefs said she to drop out due to illness, and Ross was replaced by Jane Frazee. 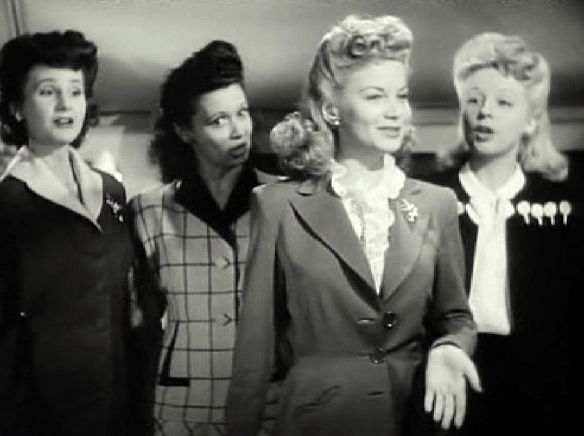 Jane Frazee and the Tailor Maids 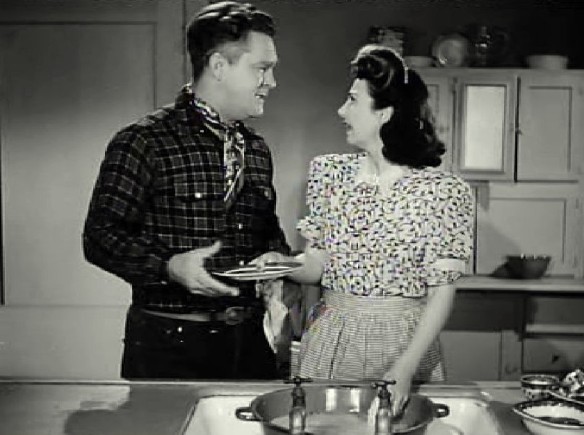 We open with music on a train — and I am a sucker for singing on a train so I was instantly in love. First we see Jimmy Wakley and His Saddle Pals in military uniforms traveling to serve in World War II. Wakley sings “Ridin’ Herd on a Cloud,” which is a western war song, even mentioning the Axis.

Then Jane Frazee and The Tailor Maids sing “Boogie Woogie Special.” The girl group is traveling to a ranch to work as ranch hands while men are serving in the military. But when the girls arrive, the owner of the ranch Steve Bradley (Charles Starrett) isn’t pleased, because he doesn’t think the girls will be any help to his mother. However, he’s pleasantly surprised by how they help out, and how they create a canteen for servicemen and women on the ranch.

While I had a ball watching this film, there were a few times I felt like information was presented to the audience, like we already knew it. Almost like perhaps a scene ended up on the cutting room floor, or perhaps those pages of the script were tossed due to budget.

For example, Steve reads a letter from his mother about what a help the women have been on the ranch. Next thing we know, Steve is called into the corporal’s office to go home to the ranch and help with the canteen … this is the first time the ranch canteen is mentioned but everyone seems to know about it. I thought, “Did I miss something?” It just comes out of nowhere like we knew about it.

But otherwise, while the plot is light, the music is awesome. Jane Frazee, The Mills Brothers and then lots of great western music from Tex Ritter, Jimmy Wakley and His Saddle Pals, and Roy Acuff and His Smoky Mountain Boys. While all of the tongs were toe-tappers, the song that stayed with me was “Wait for the Light to Shine” performed by Roy Acuff. I realized while I don’t love country music, I really like western music.

There was also a western version of a ventriloquist puppet performed by Max Terhune who made fun of Charlie McCarthy, so that was entertaining.

The lead actors in the film were B-level. The only other movie that I knew Charles Starrett from was The Mask for Fu Manchu (1932). Jane Frazee is a pleasant singer, and I have seen her in other films, but she isn’t as well known. The comedic highlights were Guinn ‘Big Boy’ Williams (who I love in any film) and Vera Vague (who also goes by the name as Barbara Jo Allen).

This wasn’t an easy to film to find, but if you do find it, it is well worth your time.