Plot:
When Nadine Hale (Miller) decides to leave her act with Don Hewes (Astaire), Don bets that he can find a new partner who can perform just as well as she does. Don finds Hannah Brown (Garland) performing in a pub and trains her to become a top-notch performer.

Trivia:
• Fred Astaire’s first movie since Blue Skies (1946), after which he announced his retirement.
• Gene Kelly was originally set to star, but fractured his ankle and had to drop out of filming. He was replaced by Fred Astaire, according to Charles Walters’s biography.
• Ann Miller replaced Cyd Charisse, who was injured and unable to dance, according to Ann Miller’s autobiography.
• In 1947, the Hollywood Reporter originally announced that Frank Sinatra, Gene Kelly, Kathryn Grayson and Red Skelton would star in the film.
• Irving Berlin wrote several songs specifically for the film, including: “It Only Happens When I Dance with You,” “Better Luck Next Time,” “Drum Crazy,” “Stepping Out with My Baby,” “A Couple of Swells,” “A Fella With An Umbrella” and “Happy Easter.”
• Irving Berlin wrote the song “Mr. Monotony” for the film, but it was not used in the final film.
• First film of actor Jules Munshin.
• Irving Berlin originally offered the film rights to the music and story to 20th Century Fox, who turned the film down because of his price.
• Vincente Minnelli was originally set to direct the film, but was replaced at the recommendation of Judy Garland’s psychiatrist, who didn’t feel she could work under his pressure, according to Garland’s biographer.
• The vaudeville performance with Judy Garland wearing feathers is a gag reference to Fred Astaire and Ginger Rogers dancing in TOP HAT (1935). Rogers wore a dress with feathers and Astaire was not pleased because of how the dress shed. 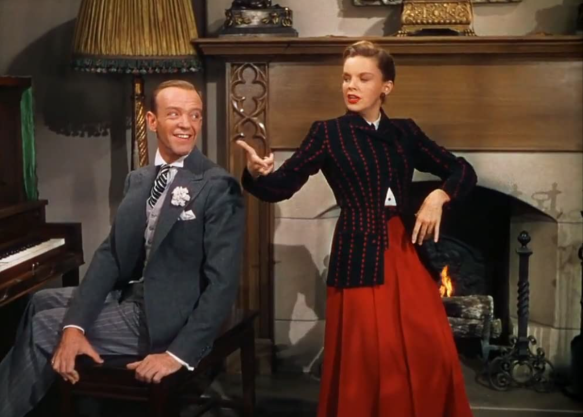 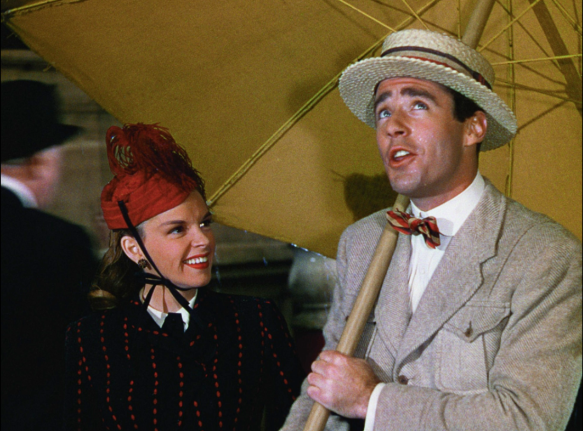 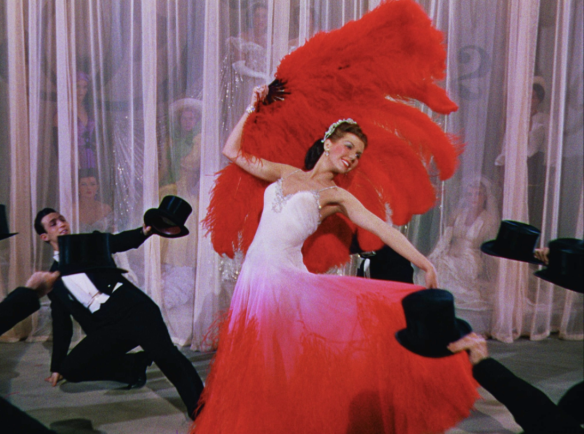 My review:
From beginning to end, EASTER PARADE is a stunner.

Right off the bat and in the first 10 minutes, we open up with two joyful, colorful songs: “Happy Easter” which leads into “Drum Crazy.”

The film follows Don Hewes (played by Fred Astaire), who is jilted by his glamorous dance partner Nadine Hale (Ann Miller) in love and business. While on a bender, he finds Hannah Brown (Judy Garland) and vows to make her his dance partner. In the process, Hannah falls in love with Don, who is all business.

Peter Lawford also co-stars as a playboy who Nadine is interested in but he likes Hannah. While I don’t really know the point of his role — or who at MGM ever decided Lawford needed to be a musical star — he’s still charming in this film. I quite like his performance as “Fella with an Umbrella.”

I think EASTER PARADE features some of Fred Astaire’s finest dance performances. “Drum Crazy” is an exuberant number, where Astaire does what he does best—take objects (drums this time) and involves them in his choreography. Then there is “Steppin’ Out with My Baby,” which involves that fantastic and innovative feature, where the chorus is dancing at regular speed and Astaire, in front of them, is slowed down. I was also fascinated by the three female dancers who got to dance with Astaire. They are fantastic, and can you imagine that thrill?

It’s hard to pick a favorite song in this film, because I love so many of them: “I Love the Piano,” “Snooky Okems,” “Ragtime Violin” and “When the Midnight Choo Choo Leaves for Alabam.’” They are all so fun and thrilling.

In addition to being great musically, this is also a very funny comedy. There are several laugh out loud moments, and that first time Garland and Astaire dance with the feathers is downright funny. Their performance of “Snooky Okems” is hilarious.

Judy Garland and Fred Astaire are great together and have fabulous chemistry. Acting or not, you get the feeling they are having a good time.

Ann Miller also gives some excellent dance performances, getting to show off both tap and ballroom skills. However, I have to admit that I prefer Doris Day’s “Shakin’ the Blues Away” to Miller’s. I was also worried about the livelihood of all the dogs Miller’s character owns. Shout out to the dachshund at the beginning.

Visually, this movie is just gorgeous. Shot in vibrant Technicolor, costume designers Irene and Valles were not shy to use bright colors. Every costume for both men and women have brightly colored gloves, shoes or patterned tights. In “Steppin’ Out with My Baby,” Astaire wears a white suit but red socks and tie. Until this last viewing, I never noticed the hat models in the “Happy Easter” number were all wearing the same beige dress to set off brightly colored green, red or yellow hats. Just gorgeous.

From start to finish, EASTER PARADE is a joyous experience. I was pretty down when I started the movie, but it pulled me out of that and had me laughing throughout.