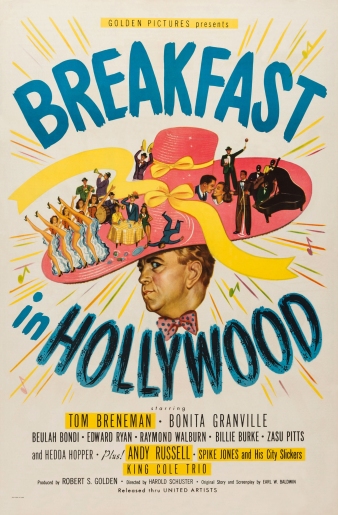 Plot:
Several people attend the “Breakfast in Hollywood” radio program, hosted by Tom Breneman (himself):
• Dorothy Larson (Granville) who is looking for her solider fiancée, who she hasn’t heard from
• Elderly Mrs. Annie Reed (Bondi), who has no one to look after her
• Plain Mrs. Frances Cartwright (Burke) who’s husband (Walburn) is stepping out on her
• Elvira Spriggens (Pitts), who desperately wants to win the radio’s crazy hat contest.
While all of seemingly only attending the program for fun, each of them has an experience that follows that alters their life.

Trivia:
• The film is based on the morning radio program “Breakfast in Hollywood,” which was hosted by Tom Breneman. The radio program aired from 1941 to 1948 and hinged on Breneman talking to audience members about anything from the oldest member in the audience to who wore the craziest hat.
• Appearing as themselves, Alice Cooper, Gary Cooper’s mother; Anna Le Seur, Joan Crawford’s mother; and Ida Breneman, Tom Breneman’s mother, all make an appearance in the movie as attendees to the radio program. 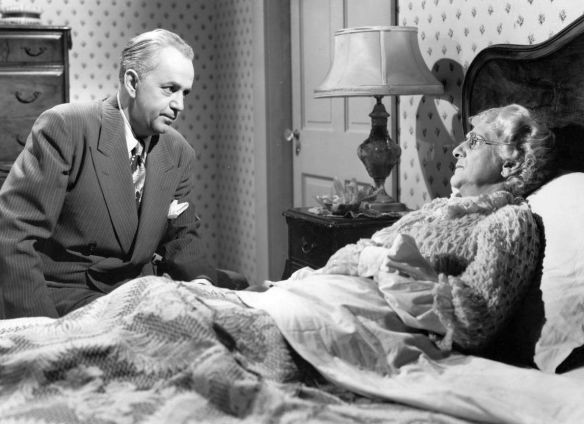 Highlights:
• The appearance of the mothers of actors 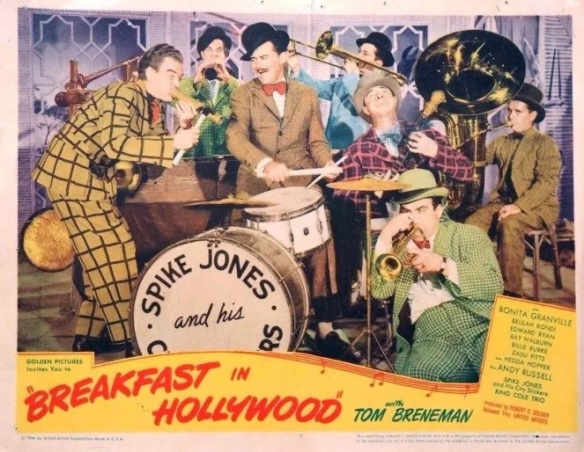 My review:
Filmed at the height of radio popularity before television came on the scene, this week’s Musical Monday is an interesting overlap of radio and film.

The film capitalizes off of the popularity of the radio show, “Breakfast in Hollywood,” hosted by Tom Breneman. As the film depicts, the show was geared toward women and Breneman’s interaction with the audience. He would visit with guests and ask who they were, look for a crazy hat in the audience, draw for someone to win a “wishing ring,” and would look for the oldest lady in attendance would get an orchid. Musical performances from talent would be dispersed throughout the film. 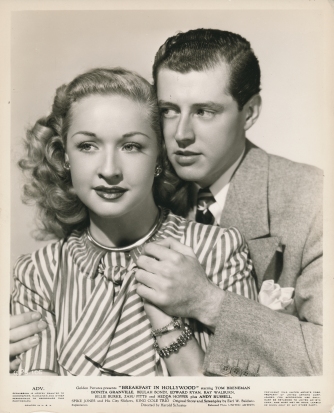 In the film, Zasu Pitts is eager to win the crazy hat contest, Beulah Bondi wins the oldest guest contest, and Bonita Granville got the wishing ring. Granville’s character is also looking for her fiancée, and meets a soldier returning from the war, played by Edward Ryan. Granville and Ryan’s character hit it off, and he also unfortunately knows her fiancée and doesn’t have good news for her.

While this film doesn’t really have much substance, I found it to be so sweet and also an interesting curio. It provides a glimpse into radio popularity of the day.

BREAKFAST IN HOLLYWOOD is also just such a sweet film. Beulah Bondi and Billie Burke play such cute, sweet character. Bonita Granville looks gorgeous, and we get to see Hedda Hopper wearing a crazy hat with a fishbowl on top.

I also loved the surprise of seeing Gary Cooper and Joan Crawford’s mothers on screen!

The film is padded out with great musical performances, including the King Cole Trio — which of course features the great Nat King Cole.

Overall, this is an extremely pleasant and fun way to spend 90 minutes. And you’ll learn a bit about old time radio history, too.