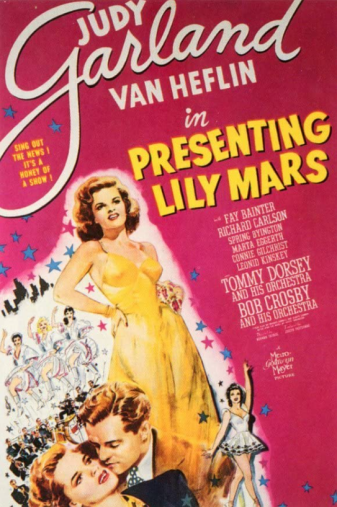 Plot:
Lily Mars (Garland) is eager to become an actress. Major Broadway producer John Thornway (Heflin) is from Lily’s Indiana hometown, and while visiting his mother (Bainter), Lily tries to make an impression. John finds Lily to be a nuisance, but despite his deterrence, Lily goes to New York City to try to break into acting.

Trivia:
• Originally planned as a Lana Turner vehicle. Turner had a scheduling conflict and it was shifted to Judy Garland.
• George Murphy was originally considered for the role of the male lead.
• Based on a Booth Tarkington novel of the same name.
• Choreographer and future director Charles Walters choreographed the finale and dances it with Judy Garland.
• First feature film about Annie Ross, billed as Annabelle Logan
• The musical number “Paging Mr. Greenback” was deleted from the final film.
• Connie Gilchrist’s singing voice was dubbed by Mary Kent.
• Lyn and Lee Wilde appeared together for the first time on screen. 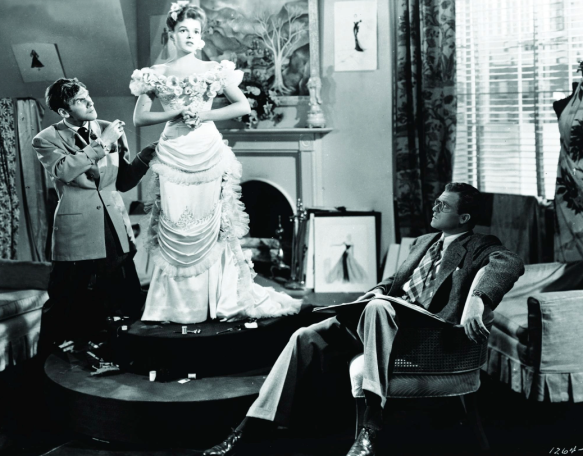 Highlights:
• The scene with Connie Gilchrist
• The running doorknob gag. 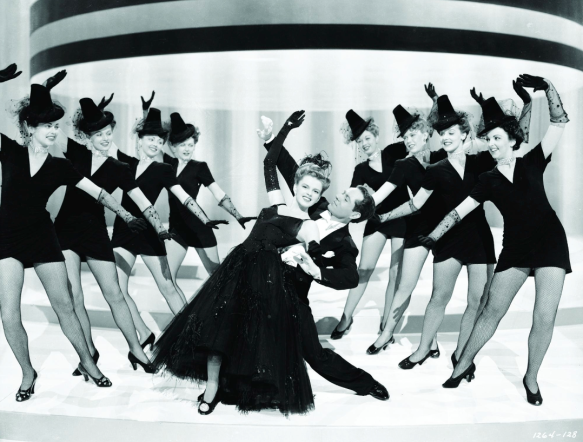 My review:
Actress, singer Judy Garland grew up on screen for audiences. Starting in films at age 14, she played little girls early in her career, sometimes younger than she was in real life. As she grew, she had adolescent romances on screen with Mickey Rooney in musicals and Andy Hardy films, and sang and danced in high school performances.

But by the 1940s, Garland was able to transition into adult, young women roles, such as a collegiate in GIRL CRAZY (1943) or a Ziegfeld hopeful in ZIEGFELD GIRL (1941). One of these adult roles was PRESENT LILY MARS (1943), which also provided an adult romantic relationship in the plot with actor Van Heflin.

The film starts with Lily Mars (Garland) back home in Indiana, surrounded by her haphazard, frantic but happy family — a milliner mother (Byington), three wild little sisters and a door knob collecting (or stealing) little brother. Lily has high hopes to become an actress, much to the frustration of her boyfriend Charlie (MacDonald), as she acts around the house. She tries to get in the good graces of Mrs. Thornway (Bainter), so that she’ll put in a good word to her Broadway producer son, John Thornway (Heflin). Lily tries every trick in the book to get John’s attention — impromptu performances, sneaking into parties, and stealing his script. John is irritated by all this and can’t wait to get back to New York City … except that Lily follows to find a job and break into the business. John’s opinions of Lily eventually change.

PRESENTING LILY MARS is a sweet, funny and dreamy type of movie. The moments with Lily and her family are sweet and heartwarming. They may be a bit quirky, but they love and support her in all she does. There are several funny moments with her family and Van Heflin’s reactions to Lily’s antics early in the film. Richard Carlson is also fun in this one.

There is a lovely and touching scene where Connie Gilchrist, a cleaning woman at the theater, talks with Lily about her own journey as a young woman who left the Midwest for New York City to embark on a career. She had stage triumphs, and says that while she now carries a broom, she wouldn’t change a thing. Gilchrist does a lovely job in this scene. It’s one of the best moments of the film. It’s really stunning. The scene ends with Garland and Gilchrist singing a duet, with Gilchrist dubbed by Mary Kent.

As far as dreamy goes, when the relationship of Lily and John shifts from irritated to romantic, it is so dreamy, I swooned. Van Heflin is incredibly good looking in this film (the glasses! That tux! Wow!) and they have excellent chemistry here.

For a Judy Garland film, I felt like she didn’t have as many songs as usual, but the songs she does have are great. A major musical highlight to me is Charles Walters dancing with Judy Garland in the finale. I loved watching Walters perform a dance he choreographed. He would go on to direct Garland in EASTER PARADE.

We also get to see popular big bands of the day in this film, including Bob Crosby and his orchestra and Tommy Dorsey with his orchestra. You can see twin singing and acting sisters, Lee and Lyn Wilde, briefly perform with Crosby’s band, which was their first on-screen appearance together.

Overall, PRESENTING LILY MARS is a fun, energetic and sweet musical. Just a joy to watch.