Plot:
When Rudy Vallee and his band are in a wreck, the Garden of the Moon nightclub doesn’t have any entertainment scheduled to perform. The tyrannical nightclub manager John Quinn (O’Brien) is convinced by his press agent Toni Blake (Lindsey) to hire an unknown band lead by Don Vincente (Payne). Don and John butt heads, especially as John wants to replace Don with Rudy Vallee two weeks after they start. Toni works on a publicity campaign to get Don in John’s good graces.

Trivia:
• Columnist and radio journalist Jimmie Fidler makes an appearance in the film as himself.
• Though Rudy Vallee and the Connecticut Yankees are a plot point in the film, they are not in the film.
• The screenplay came from a 1937 Saturday Evening Post story of the same title written by H. Bedford-Jones and John Barton Browne.
• The Hollywood Reporter said that Dick Powell accepted a layoff instead of be in the film.
• The nightclub in the film is based on the Coconut Grove. 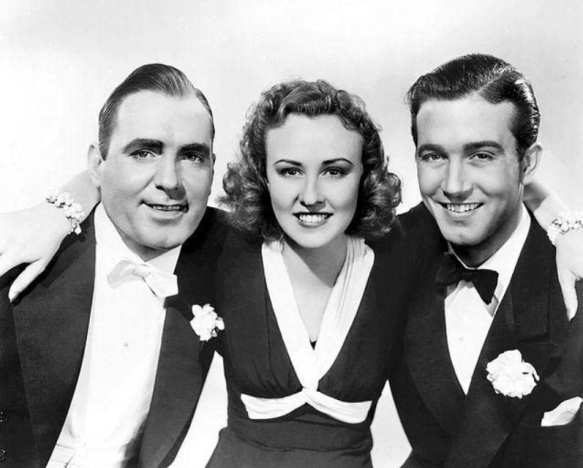 My review:
Let me get this out right now: John Payne is just so adorable, handsome and all around wonderful in this film! I just beamed every time his face was on screen.
Okay, now that that’s out of the way:

In GARDEN OF THE MOON, Pat O’Brien plays a gruff, tyrant high class manager of a nightclub, John Quinn. This type of role is different than other roles O’Brien plays and he’s so good.

Begrudgingly, John Quinn hires Don Vincente, played by John Payne, and his band so that the Garden of the Moon nightclub will have entertainment after their original band fell through. This is the band’s first paying gig and while they are excited to start, John Quinn can’t wait to get rid of them. Don wants to play the music that his band wants to, and John doesn’t want them to play certain numbers and wants a girl singer to perform with them. Don bucks John’s orders and the two clash and the crowds love Don. Despite that, John still wants to fire Don, so press agent Toni Blake, played by Margaret Lindsay, cooks up a publicity campaign with Jimmie Fidler, saying one of Don’s classmates was royalty.

This movie is really a delight, though it is astounding how Pat O’Brien’s character of John Quinn will battle with everyone at the expense of ruining his business.

While this is a Busby Berkeley film, this film doesn’t have the visually stunning imagery of his earlier 1930s Warner Bros. musicals. The most notably Berkeley filmmaking is a montage of close up hands playing instruments. The musical numbers are also catchy and joyful, but perhaps not as memorable. But they made me smile … especially when John Payne was singing.

In his sixth film, 26-year-old John Payne is charming and delightful in this musical. Payne doesn’t get enough credit for being able to play everything from musicals to drama to film noir. I could just squeal over him in this film, but I got that over with when I opened.

Pat O’Brien is excellent too, and I loved seeing the always hilarious Curt Bois.

Some of Berkeley’s usual stars appear in this film, like Mable Todd and Johnnie Davis.

While not Busby Berkeley’s best, I found this to be a delightful film and it was a joy to watch.