Plot:
Jerry Haines (Melton) is the heir to department store. Instead of taking an executive role, he wants to start in a regular job and work incognito so he can better get to know the store. Meanwhile, he romances Jean Martin (Ellis) in the music department and is constantly in trouble with the manager (Catlett).

Trivia:
• Working titles were “Come Up Smiling” and “Let’s Pretend.”
• Premiered on Dec. 25, 1936, in New York City
• James Melton’s second film. He made three films under contract at Warner Bros. 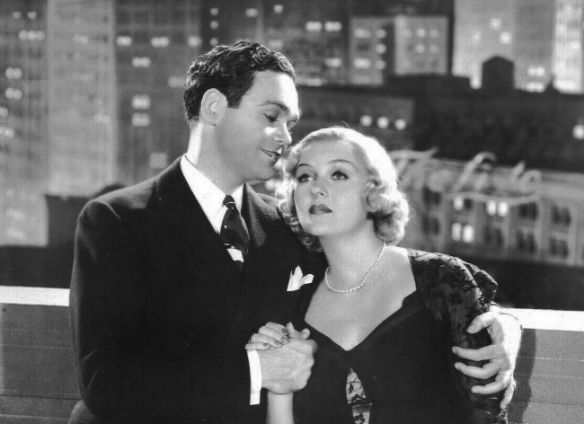 My review:
I have now seen all three of James Melton’s films, and I just can’t warm up to him. He has a melodious voice and a pleasant enough face, there’s just something lacking.

I half expected to see that SING ME A LOVE SONG (1936) was remade as THE DEVIL AND MISS JONES (1941), because department still owner working on the ground floor was a familiar plot device.

SINCE ME A LOVE SONG (1936) has a “who’s who of Warner Bros.” cast complete with all the familiar supporting characters: Hugh Herbert, Allen Jenkins, Zasu Pitts, Walter Catlett, Granville Bates, Nat Pendleton and Hobart Cavanaugh.

While James Melton’s character of Jerry pretends to be an everyday worker, Hugh Herbert plays a character store thief, Zasu Pitts loves music but is often breaking instruments in the music department, Walter Catlett is the chief store floor walker, and Allen Jenkins runs an elevator and pretends to be buddies with the store owner.

While I love musicals, Melton’s singing gets a little tiresome, because he’s the only singer in this film — except for a humorous moment where he and Zasu Pitts sing a duet and a few duets with Patricia Ellis. It would have been nice if another singer had a solo to break up the monotony.

By the end of the film, Hugh Herbert plays four roles and that’s a good bit of Hugh Herbert.

SING ME A LOVE SONG is fairly pleasant, but Melton as the lead is what makes it fall flat for me.