Plot:
Hiram Stokley (Karloff) has recently died. He is visited in his crypt by the ghost of his wife Cecily, (Hart), who is still young and pretty like the day she died many years before. Cecily tells Hiram that his relatives will soon be reading his will and dividing his wealth. His heirs include Chuck Phillips (Kirk), Lili Morton (Walley) and Aunt Myrtle Forbush (Kelly). In addition to the heirs, a group of swinging teens arrive to party at the old mansion. Hiram and his ghost wife keep a close eye on the inheritance proceedings, because he doesn’t trust his lawyer Reginald Ripper (Rathbone) or his daughter Sinistra (O’Hara) as they are out for the money themselves, who try to scare the teens off through scare tactics.

Trivia:
• First announced as “The Ghost with the Glass Bikini,” which would star Annette Funicello and Frankie Avalon. It was announced at the end of “Dr. Goldfoot and the Bikini Machine.”
• Producer James H. Nicholson wasn’t happy with the original cut so the corpse played by Boris Karloff and his ghost wife played by Susan Hart were added at a later date.
• Last feature film of Francis X. Bushman
• Cinematography by Stanley Cortez
• The seventh and last of the originally American International Pictures beach party films.
• Only feature film of Italian singer Piccola Pupa
• The film went through several title revisions including:
• The Girl in the Invisible Bikini
• Pajama Party in the Haunted House
• Slumber Party in a Haunted House
• Slumber Party in Horror House
• Bikini Party in a Haunted House
• Beach Party in a Haunted House
• Ghost in the Glass Bikini

Highlights:
• Patsy Kelly telling Basil Rathbone to “Get with it!” and dancing
• Harvey Lembeck saying “One of them looks like Sherlock Holmes” in reference to Basil Rathbone
• Boris Karloff 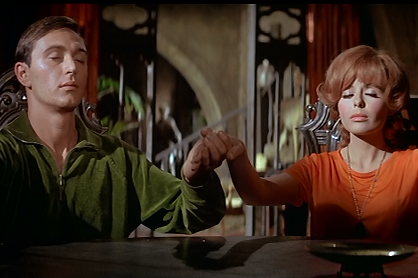 My review:
In the seventh and last of the “Beach Party” films, there aren’t any beaches or surf boards in sight. But in THE GHOST IN THE INVISIBLE BIKINI, there are plenty of teens dancing in bikinis both by the pool and indoors, and even a ghost wearing a bikini (though it’s see-through).

The backdrop to the pool and bikini set is a haunted house which is outfitted with a chamber of horrors. A gorilla, mummy and bubble monster try to scare the teenage heirs away.

I think one of the most interesting things about this film is that all of this was filmed with the cinematography of veteran Stanley Cortez, ASC.

From 1963 to 1966, American Internationals Pictures churned out seven of these teen-focused comedic films. They are silly, ridiculous and have nonsensical plot points, but they are still overall fun. They never were going to win any accolades, except for maybe making you chuckle and introduce you to a snappy, fun song.

The core plot focuses on the reading of Hiram Stokley’s will with each individual wondering who will receive his millions. However, like with most beach films, that is but a footnote with most of the film. Swinging teenagers dance in bathing suits. Jealousy rises when Vicki (Sinatra) sees that her boyfriend Bobby (Kincaid) is being lured away by Sinistra (O’Hara) for his potential inheritance that he’d get from his aunt (Kelly). Eric Von Zipper (Lembeck) and his gang are of course on and as well.

While Frankie, Annette, Jody McCrea and Michael Nader are no where to be found, many of the other beach party supporting cast members appear in the film, such as Susan Hart, Bobbie Shaw, Luree Holmes, Mary Hughes, Salli Sachse and Patti Chandler.

Nancy Sinatra is a new face in the beach films, and performs the best song in the film, “Geronimo.” She really should have performed more songs. Aaron Kincaid returns for his second American International Pictures film after appearing in SKI PARTY. My first introductions to Kincaid were in other films where he played a bad guy. But his forte really was comedy in these American International Pictures films. He’s hilarious.

The film is front loaded with the songs at the beginning. The only song I was not into was “Stand Up and Fight” performed by Piccola Pupa, who they were clearly trying to promote in this film.

The real highlight of this film were the old Hollywood veterans that appeared: Boris Karloff, Basil Rathbone, Frances X. Bushman and Patsy Kelly. While it did make me a bit sad that their careers had come to this, they were great—all except Bushman who really didn’t have any lines and was only onscreen for two scenes. It did make me sad to see Bushman here in his last film, a star who was in the original Ben-Hur.

However, Karloff was such a highlight and was quiet funny (and adorable). Basil Rathbone still looked dashing and there is quite a funny line where Harvey Lembeck says he looks like Sherlock Holmes. And I swear, did Patsy Kelly age? She looks and sounds the same as she did in the 1930s.

THE GHOST IN THE INVISIBLE BIKINI is truthfully ridiculous, but it had some funny moments. I can’t say that it would have been improved with Frankie and Annette in the lead roles, because Tommy Kirk and Deborah Walley really aren’t focused on that much. But I would have enjoyed another buddy film with Frankie Avalon and Dwayne Hickman, like in ski party.

But this is a fun spooky musical with entertaining moments, especially from Boris Karloff.