Photography and moving pictures walk hand-in-hand, especially when shooting in black and white. Many people prefer color and dismiss black and white as cheap. However, some don’t realize the skill it takes to shoot black and white: making sure you have perfect lighting or having the shadows just right are just a few things to consider.

For being so closely related, it’s surprising that there aren’t many classic films about photography. I was only able to find an handful:

James Stewart in “Rear Window” spying on his neighbor

1. Rear Window (1954): James Stewart plays L.B. “Jeff” Jeffries, a free lance photographer who is laid up with a broken leg that was a result of a dangerous assignment. I’m not sure if this movie paints photographers in the best light. Jeff is in love with high society Grace Kelly but doubts that she could go on assignments with him even though she says she could. Jeff is also a bit of a peeping Tom, spying on his neighbors with his telephoto lens.
However, his peeping Tom-ery isn’t all bad since he uses it to solve a murder that he partially witnesses in an apartment across the way. Jeff cleverly mixes his career and survival techniques as he thwarts the murderer by blinding him with flash bulbs.

2. Roman Holiday (1953): The movie is more about  journalism than a photography, but the photographer certainly plays a large part in the film. Journalist, Joe Bradley (Gregory Peck), is trying to get an exclusive story on a visiting princess (Audrey Hepburn) who just happens to be staying in his apartment.
Eddie Albert plays Peck’s photographer friend who tags along to get the photos for the story. This movie seems to depicts photographers as deceitful playboys. When Peck calls Albert about the story, Albert is photographing and kissing a woman in his apartment. When he is getting pictures of the princess, he doesn’t openly take pictures of her but uses sneaky little spy cameras. A real photographer wouldn’t be so afraid…
Actually, from a journalism student’s point-of-view, it doesn’t paint the newspaper business in a good light either. It has the “anything for a story” undertones and Peck goes to unethical measures to get a story. Even though he doesn’t publish it, if he was doing that in today’s journalism world he would probably face a law suit. 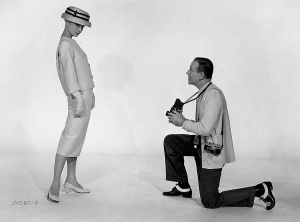 Audrey Hepburn and Fred Astaire in “Funny Face.” Their characters were modeled after Richard Avedon and Dovima.

This movie is simply about fashion photography. It has many interesting and pretty scenes with fashion, dresses and dancing. The thing I like about the movie is that Fred Astaire’s character, Dick Avery, and Audrey Hepburn’s character is supposed to be like the relationship between one of my favorite photographers, Richard Avedon and his muse, Dovima.
Fashion photography is fun and pretty to look at, but the photographer I can’t imagine it being very exciting. From a journalist/writer view point, it would be like writing the same story over and over again. For example, how does Danielle Steel get any excitement out of writing when all of her books basically have the same plot?

4. Weddings and Babies (1958): This is an independent film about a photographer (John Myhers) who is trying to save money in order to get married to his girlfriend, Viveca Lindfors.
I think this movie gives the most realistic depiction of a photographer. He feels unfulfilled because he is only taking pictures of just weddings and babies and wants to do something with a purpose. I’ve heard several photographers say that, others take the wedding route because it’s easier and pays well, but the ones with a drive don’t care so much about the money.
My philosophy of photography is that it should inform just like a newspaper article. You can write a story about how the Yanomamo are losing their indigenous life style, but a picture can better show how it is devastating them. Photography should be about truth, not about how to show in the best light. 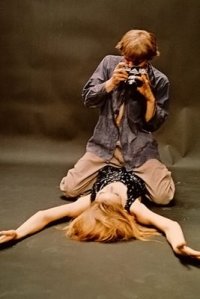 5. Blowup (1966): This movie is a mod 1960s, English film. If that doesn’t mean anything to you, it means that it’s rather odd, has little plot and a few naked women thrown in for good measure. However, in comparison to the photographer in “Rear Window” who is a photojournalist and travels the world, the photographer, played by David Hemmings, is a successful commercial fashion photographer. He is also bored with life…go figure, wouldn’t you if you were just photographing fashion?
Anyways, the movie is about his career as a photographer, but it is rather long and drawn out. He thinks he might have photographed a murder, but we never really find out and the murder is never solved. It is a treat though to see the beautiful Russian model, Verushka, at the beginning of the film.

Those movies are the only real pre-1970s movies that used photography as a basis of the plot. I was disappointed and surprised that there are so few movies that have main characters playing photographers, since photojournalism was a big field in the 1940s and 1950s due to publications like LIFE that revolved around photography. I just can’t believe that there are so many movies about stewardesses, nurses and architects but so few about photographers.

Here are a few films that the main characters are photographers, but it is not a main point in the plot:

-One More Tomorrow (1946): Anne Sheridan plays a photographer who falls in love with high society Dennis Morgan. The fact that she is a female photographer means she is lower class and could never fit in Morgan’s social circle.

–If a Man Answers (1962): Sandra Dee marries photographer Bobby Darin. She plans on keeping her new husband using a dog training book, because she worries about him photographing other women.

–Wait Until Dark (1967): Audrey Hepburn plays a blind woman terrorized by men trying to get a heroine filled doll. Her husband in the movie is a photographer.

2 thoughts on “I’m ready for my close up: Photography in films”