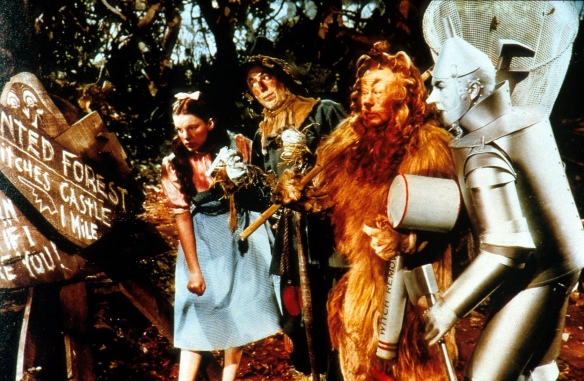 Yesterday on the radio, I heard Ryan Seacrest say that as a result of the success of “Alice in Wonderland,” Tim Burton was wanting to remake the classic, shouldn’t be touched 1939 “Wizard of Oz.”

I think this is terribly ironic because just last Friday I was watching the documentary “Memories of Oz” (2001) on Turner Classic Movies. The documentary was part of the annual July airing of “Wizard of Oz” to celebrate when it was released.

In this documentary actor/writer John Waters (who seemed rather bizarre) said that remaking the “Wizard of Oz” would be suicide and it would fail; the only way it would work would be with completely unknown actors, but that wouldn’t even be fool proof.

Well John, looks like they didn’t listen to your advice. However, as much as I want it to, I doubt Tim Burton’s movie will fail. Everyone seems to love his creepy, odd direction and films and they all do fabulous in the box office. I personally am not a fan, but it seems I am the only one who is not.

As for unknown actors, Seacrest said that it was rumored that Angelina Jolie would play the Wicked Witch of the West. He said she wanted to show that she wasn’t afraid to play “evil roles” and he also called her “the biggest celebrity in the world.”

Ok two things Ryan: 1.) Hasn’t Angelina already proven that (in film and real life haha)?  2.) I wouldn’t say Angelina is the “biggest star in the world.” All she does is adopt babies and occasionally act. I had forgotten about her until I saw a preview for “Salt.” She wasn’t even at the Academy Awards!

I don’t know about how many of you feel about remakes. I personally hate them. It usually seems I worry and worry and worry about them and then they fail in the box office anyway or you never hear about them. Examples of this would be: “The Women” (2008)-second remake of 1939 Joan Crawford film, “Beyond a Reasonable Doubt” (2009)-remake of 1956 Dana Andrews film  or “Psycho” (1998)-remake of the 1960 Hitchcock film.

After I told my mother, she said, “Next they will remake ‘Gone with the Wind’!” I disagree, because it doesn’t seem that anyone is interested in the South except for we southerners. Also, “Gone with the Wind” has been dubbed ‘racist’ because it has slaves in it, so I’m not sure how current politically correct would tip toe around the historical fact that there were slave owners in the 1800’s in the south. However, Robert Osborne, prime time host of Turner Classic Movies and my idol, shakes his head when people call the film ‘racist’ and reminds his viewers that it was a different time in film and you can’t take everything from contemporary standards.

How do you feel about the remake? Do you think it will fail? What classic movie is next to go on the chopping block?

7 thoughts on “Remake is a dirty word”