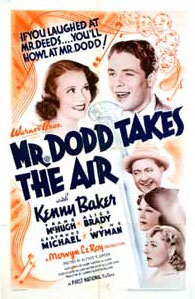 Plot:
Electrician Claude Dodd (Baker) becomes a singer on the radio. Dodd is promoted as a baritone singer, but after having an operation on his throat, his voice changes to a tenor. Dodd becomes a sensation on the radio. Dodd also makes waves when he invents a device that makes radio reception more clear.

Trivia:
-Nominated for an Academy Award for Best Music, Original Score for “Remember Me” written by Harry Warren and Al Dubin. 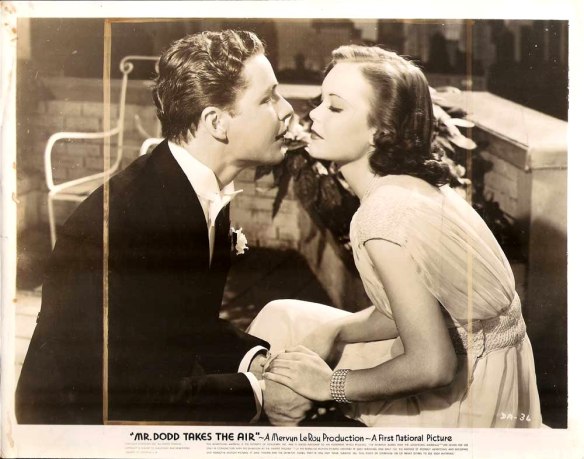 My Review:
Kenny Baker was under contract with Warner Brothers with the idea that he would replace Dick Powell as the studio’s crooner, who had aged out as the “boy singer.” Baker and Powell look vaguely similar, sing the same crooner like songs and play similar roles. However, though Baker isn’t bad, he is still no Dick Powell.
“Mr. Dodd Takes the Air” is a B-Musical–music by  Harry Warren and Al Dubin– with the typical plot where a small town guy hits it big as a singer. He gets mixed up with glamorous ladies who he thinks are falling for him but are really after his radio invention. Of course, Jane Wyman is his old standby until the end.
Wyman is probably the highlight of this film, however I’m not sure why she is billed fifth.
This is a cute film, but nothing remarkable when it comes to creativity. It is simply entertaining.