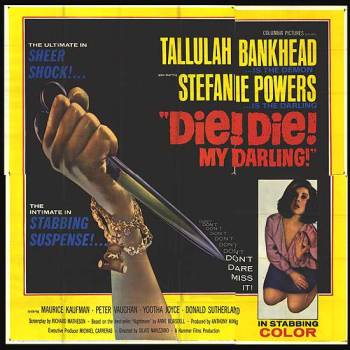 Starting in the 1960s with Bette Davis and Joan Crawford in “Whatever Happened to Baby Jane?” (1962), famous actresses of the 1930s and 1940s who were now “past their prime” were cast in semi-campy horror roles.

Actress Tallulah Bankhead’s last film happened to be one of these horror films. Made in the UK under the title “Fanatic” and called “Die! Die! My Darling! (1965) in the United States, actress Stefanie Powers co-stars with Bankhead.

Directed by Silvio Narizzano, Bankhead plays Mrs. Trefolie whose son Steven died tragically. At the time of his death, Steven was engaged to Patricia Carroll, played by Stefanie Powers, but Patricia intended on breaking off the engagement.

Patricia kept correspondence with Mrs. Trefolie and decides to pay her a visit at her secluded home while she is in England with her fiancé Alan, played by Maurice Kaufmann. Alan warns her not to go alone, but Patricia doesn’t listen.

What Patricia plans to be a four-hour visit turns into several days trapped in Mrs. Trefolie’s home.

Mrs. Trefolie is obsessed with her son and is fanatically religious. For example, Trefolie insists Patricia stays until the next morning for a private church service at home which lasts 12 hours. 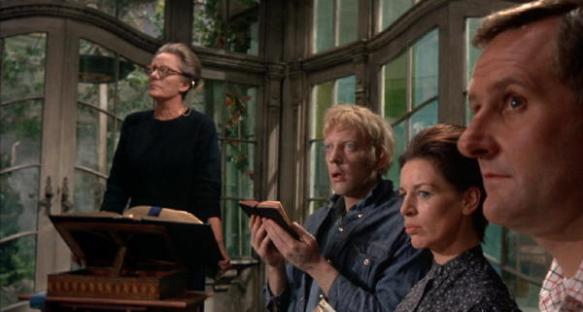 Dinner is served after the church service, but the food is plain, unflavored, vegetarian and they use no condiments, because “God’s food should be eaten unadorned.”

When Mrs. Trefoile notices a lipstick stain on Patricia’s glass, she is told to wash her makeup off. There also aren’t any mirrors in the house because they encourage vanity and sensuality.

Patricia is told to change immediately when she is wearing a red sweater, because it is the “Devil’s color.” Mrs. Trefoile believes that Patricia is her daughter-in-law, because she qualifies the engagement to Steven as marriage. In her religious beliefs, Mrs. Trefoile says Patricia could never remarry, even with a dead husband, because it is against God’s will and she is eternally wedded to Steven….though they never were married. Mrs. Trefoile also refuses to go to a local church, because the pastor remarried after his wife died several years before, believing he is forever married to the first woman.

When Mrs. Trefoile finds out Patricia is newly engaged and was planning to breakup with Steven before his death, she blames Patricia for Steven’s death, saying she killed him, and locks her in the house. Helping the elderly woman through all of this are her two servants, who hope to inherent her money.

By depriving Patricia of food and locking her away in solitude, Mrs. Trefoile says she is trying to “cleanse Patricia’s soul.” This includes interrogating Patricia about her virginity and tearing up all of her beautiful clothing and jewelry. Mrs. Trefoile believes she hears her son tell her to murder Patricia, and she sets out to do so. 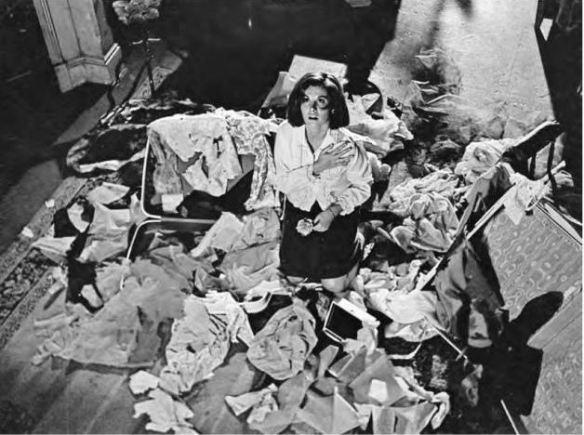 Not only is “Die! Die! My Darling!” Bankhead’s last film, but also her first horror movie, according to the LIFE magazine article, “One Old Trouper Comes Back” by Conrad Knickerbocker.

The film is based off the novel “Nightmare” by Anne Blaisdell. The English horror movie is enjoyable. I thought the religious fanaticism added a level of intrigue, depth and craze to Bankhead’s character, rather than the usual overbearing mother role. Mrs. Trefoile’s obsession with her dead son is exhibited by believing that his soul is in the house and responding to her, his photos everywhere and cuddling his teddy bear as she sleeps.

Although Bankhead’s character says she doesn’t believe in vanity, in the film, we see scrapbooks of Mrs. Trefoile in her younger years and costumes hang in the basement, suggesting that at one point she was an actress. (One of the photos shown in the film is Bankhead in her stage role in “Little Foxes.”)

Admittedly, I was rather frustrated while watching “Die! Die! My Darling!” There are several moments where you think Stefanie Powers can overtake this rickety old woman who keeping her captive, but she flails around and fails. 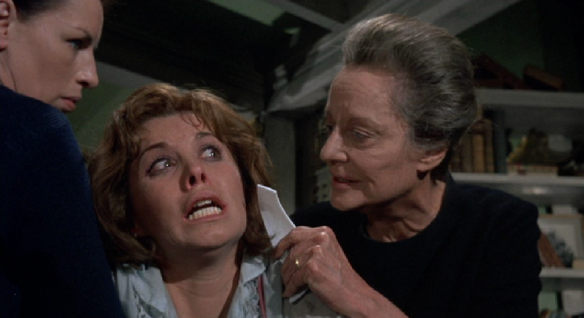 Mrs. Trefoile threatens to cut Patricia’s face so she will no longer be attractive to men. Maid Kate holds Patricia so she can’t escape.

Powers’ character had a sharp tongue but was too weak and uncoordinated to fight Bankhead’s character alone, and this frustrated me greatly. However, while I was frustrated with Powers in the film, I realized that was how her character was written in the script.

Another odd thing about “Die! Die! My Darling!” was the music. For the first half of the movie, the soundtrack was quirky and almost comedic harpsichord music. The music could be comparable to the 1960s English TV show “The Avengers,” starring Diana Rigg. However, as the cat-and-mouse torture between Powers and Bankhead escalated, the music became more serious and exciting. 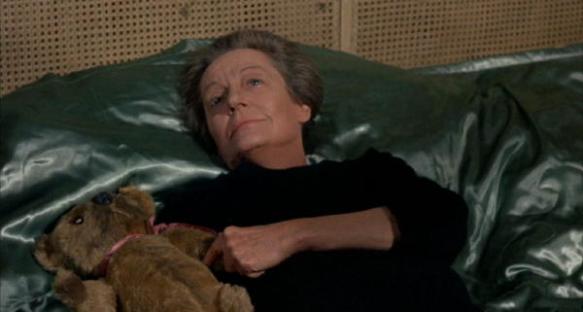 Mrs. Trefoile talks to her dead son while holding his Teddy bear.

I believe my favorite character in the film was 30-year-old actor Donald Sutherland in one of his first film roles. Sutherland played a worker at Mrs. Trefoile’s home who had special needs. I was a little disappointed he wasn’t in the film more, and his character wasn’t given much of a purpose.

“Die! Die! My Darling!” is a little more quirky and humorous than other horror movies starring actresses like Joan Crawford or Bette Davis. However, while I wouldn’t rank the film higher than “Whatever Happened to Baby Jane?” (1962), “Hush, Hush Sweet Charlotte” (1964) or “Strait-Jacket” (1964), the cat and mouse interactions between Bankhead and Powers were intriguing and made for an enjoyable Friday evening film.