Plot:
Biographical film of vaudeville performer Eddie Foy (Hope). The film mainly concentrates on Foy’s marriage, the birth of his seven children and how he was never home for his family. After Foy’s wife and mother of the seven children passes away, the children are brought into the act.

Trivia:
-James Cagney reprises his role as George M. Cohen from “Yankee Doodle Dandy.”
-Son of Eddie Foy, Charley Foy, narrated the film.
-In 1964, a made for television special of the story aired presented by Bob Hope Presents the Chrysler Theatre. In 2007, there was a stage musical adaptation. 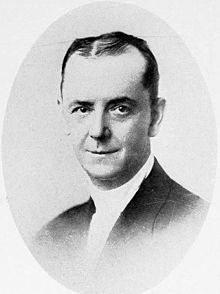 Bob Hope’s role in “The Seven Little Foys” is one of two truly dramatic roles he did in his career, the other being “Beau James” (1957). While fun, comedic Hope is entertaining, I enjoyed seeing a more serious screen performance from him.
The real Eddie Foy, Sr. died in 1928 at the age of 71. His son, Eddie Foy, Jr. can be spotted in several 1930s comedies.
As Comet Over Hollywood has noted many times prior in other posts, biographical films, particularly those of the musical nature, sometimes have fanciful inaccurate plots.
While Foy did have seven children, the movie only shows one wife. In reality, he had four women he was either married to or romantically involved with for many years.
Eddie Foy, Sr. and the Seven Little Foys performed together from 1910 until 1913. After they stopped performing, most of the children went on to pursue their own entertainment careers.
When I first saw this movie in middle school shortly after Hope died in 2003, I didn’t like it. Being used to the wisecracking Hope, I thought he was mean and didn’t enjoy this film. Revisiting this film over 10 years later I enjoyed it a great deal more. I think Hope does a good job with a character who has a bit more meat than films such as “Road to Hong Kong” or “My Favorite Spy.”
The first half of the film sets up Foy as a bit of a heel who is never home for his family and then comes home after she dies. In the second half you see the resentment from his children as he brings them into show business.
Of the musical numbers, the only real standout was a dance duet Bob Hope did with James Cagney, who was reprising his role as George M. Cohen. That is the real standout feature of this film to me, along with seeing Hope’s more serious side.
If you are looking for the stereotypical Bob Hope film of double takes, wisecracks and breaking the fourth wall, “Seven Little Foys” may not be for you. But if you are a Hope fan, I encourage you to check this one out to see the full spectrum of his career. 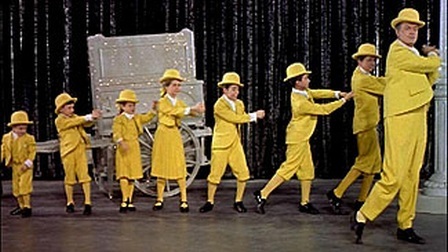 Bob Hope and the Seven Little Foys in the 1955 biographical film.