Plot:
The day ‘Snap’ Collins (Gorcey) is released from reform school, he and his friends Steve (McDonald) and Steve (Nunn) find Frank Eastman (O’Neill) who has just tried to commit suicide. The three young men revive him just as his teenage daughter Patsy (Weidler) comes home. Eastman reveals that music he composed while he was in prison was stolen by producer Arthur Cartwright (Matthews). The teens work to put on a show so Eastman can get the credit that he deserves.

Trivia:
-Originally a vehicle for Mickey Rooney and Judy Garland, according to TCM host Ben Mankeiwicz 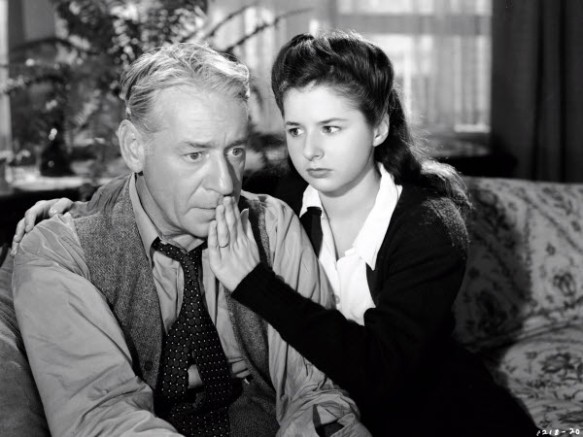 Virginia Weidler with her father, played by Henry O’Neill, after he tried to commit suicide in “Born to Sing.”

My Review:
This film is a very similar formula of Judy Garland and Mickey Rooney musical made around this time. The two Garland/Rooney films I particularly feel it mimics are “Babes on Broadway” (1941) and “Strike Up the Band” (1940).
“Born to Sing” has the same equation of down on their teens with a “Let’s put on a show!” idea to solve all of their financial problems. Somehow, their shows always look as lavish as an Florenz Ziegfeld produced musical– better sets or costumes than I have ever seen in any community theater show.
A few things that really stood out to me as a rip off of previous Rooney/Garland plots:

-The boys come across a deserted building that was once used for Nazi rallies in the United States. Naturally they convert this into a performance space. 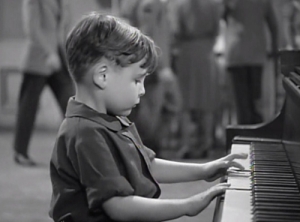 -Richard Hall plays an overly serious child prodigy musician in both “Born to Sing” and “Babes on Broadway.” In both films, people see how little he is and doubt him until he blows them away at the pino.
-“Born to Sing” and “Strike Up the Band” both have large, comedic Conga numbers. Mickey Rooney dresses up like Carmen Miranda in “Do La Conga” and “Born to Sing” features Beverly Hudson singing “I Hate the Conga.”
The big finale was directed by Busby Berkeley, which you think would be great, but it was garbage. The last eight minutes is the Berkeley directed “A Ballad for America” performed by operatic sing Douglas McPhail, who is also in the Garland/Rooney film “Babes in Arms.” I like opera music, but McPhail is dull in every film I have seen him in. On top of his dull singing style, the song is also just plain bland. Several shots in this Berkeley filmed number were fairly reminiscent of the “Forgotten Man” number from “Gold Diggers of 1933.” 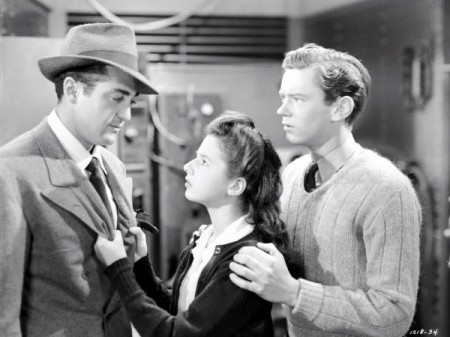 Virginia Weidler and Ray McDonald plead for help from a gangster in “Born to Sing.”

The saving factor of “Born to Sing” was that my favorite child actress, Virginia Weidler, is a grown up young woman in the film. Sadly, there is not enough Weidler to keep me happy.
The other main notable factor in this film is seeing Darla Hood perform. Hood previously acted in the Our Gang/Little Rascals films. She sings a song called “Here I Am, Eight Years Old” (And my life is already over), which is rather sad and poignant coming from the perspective of a fading child actor.
While “Born to Sing” isn’t a bad movie, it is just a shame that it feels like it’s pages torn out of scripts from other Garland/Rooney films and pasted together.
If this truly was going to be another Garland/Rooney extravaganza as Mankiewicz said in his introduction, I wonder if there would have been some more thought put into the plot.