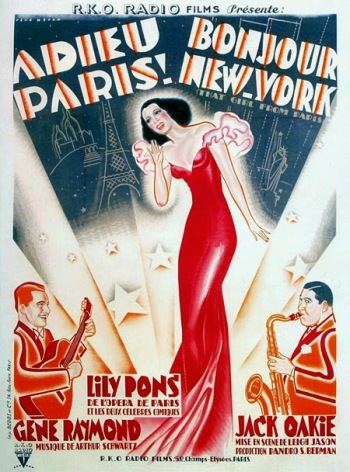 This week’s musical:
“That Girl From Paris” –Musical #504

Plot:
The day of her wedding, French opera star Nicole Martin (Pons) decides she want adventure, rather than marrying the man selected to be her husband. “Nikki” decides she wants adventure and meets up with American singer, bandleader Windy McLean (Raymond) while she is hitchhiking. Windy finds Nikki annoying and sails to America, but Nikki falls in love with him and castaways on the ship. Windy then has trouble on his hands while he avoids arrest for helping hide a stowaway in New York. Windy also has trouble when his girlfriend Claire (Ball) isn’t too fond of Nikki.

Behind the scenes photo of Lucille Ball and Lily Pons

My Review:
“That Girl From Paris” is one of several 1930s and 1940s films that took a page from “It Happened One Night” (1934) — see also “Eve Knew Her Apples” (1945).
Lily Pons runs away from her wedding to find adventure and follows around a man (Raymond) who wants nothing to do with her. I can’t say I blame Gene Raymond, because her character is quite annoying.
The two leads in the films– Lily Pons and Gene Raymond are plain annoying.
The audience is supposed to cheer for Lily Pons to end up with Raymond and live happily ever after, but I honestly feel sorry for Lucille Ball who ends up harassed by Pons and jilted by Raymond.
I found myself enjoying the supporting characters the most. Lucille Ball, Jack Oakie (who wasn’t annoying for once), Mischa Auer and Frank Jenks were much more enjoyable and much less annoying.
“That Girl From Paris” is a run of the mill, low-budget musical filled with high jinks and forgettable songs. Pons does have a beautiful operatic voice, but her annoying character overshadowed that for me.
If you are looking for a runaway bride film just watch “It Happened One Night” instead. If you want a film with good opera music- go the Jane Powell, Deanna Durbin or Jeannette MacDonald route instead.
However, if you are a true Lucille Ball fan looking to watch all of her work, this may be worth your time since she is the only bright spot in this dull film.
I don’t often direct you to not watch a musical, but this one was just too irritating.