Plot:
Hugo Meyerheld (Bressart) is the head of music for a film studio and is told the music he wrote for a film is too antiquated. His adopted daughter Angela (McGuire) has the idea to get jazz clarinet player Ding Dong Williams (Vernon) to write the music. The only problem is that everything he plays is improvised and he doesn’t know how to read or write music.

-The child piano player Richard Korbel, was supposedly this was the first time in film history that was billed as himself in his first picture, according to a Sept. 27, 1945, article called “Baby Piano Genius Play Self on Screen-a Hollywood First.” This was also Korbel’s only film. Korbel was signed to the picture after receiving high praise after a Carnegie Hall performance.

-Glen Vernon is dubbed by Barney Bigard on the clarinet. Bigard was the clarinet player for Duke Ellington’s band and one of Louis Armstrong’s All-Stars. 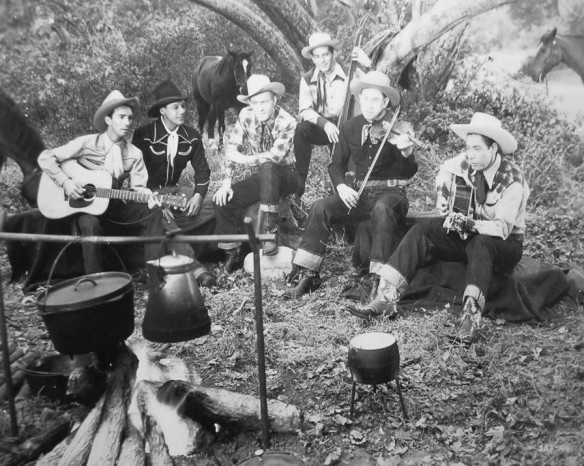 The Sons of the Pioneers performing in “Ding Dong Williams” (1946).

My review:
“Ding Dong Williams” is a simple, pleasant B-musical with the added bonus of only being an hour long.

Set on a Hollywood studio, the film’s plot isn’t much but it’s filled with entertaining songs and jazz music.

The highlight for me was the appearance and performance by the Sons of the Pioneers, known for usually performing with Hollywood cowboy, Roy Rogers.

Though I had never heard of child pianist Richard Korbel prior to this movie, which was his only film, it was interesting to see him perform a few impressive numbers. While his appearance was an interesting novelty, Korbel got quite the media build up for his appearance in this film. He was signed to the film after a successful performance at Carnegie Hall. The magnificent clarinet music in this film was also dubbed by notable clarinet player Barney Bigard of Duke Ellington and Louis Armstrong, which was amazing.

I also always enjoy North Carolina native Anne Jeffreys in her films and the plucky performance of teenage Marcy McGuire.

If you enjoy 1940s jazz music and like films that go by quickly, I suggest the fun, brief and entertaining “Ding Dong Williams.”