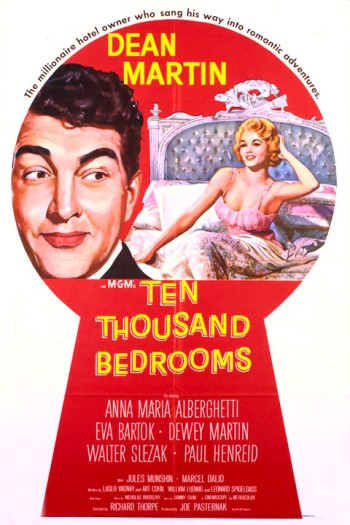 Plot:
Wealthy American Ray Hunter (Martin) owns a successful chain of hotels all over the world. The latest hotel he buys is in Rome where Nina Martelli (Alberghetti) works as a stenographer. Nina the youngest with three older sisters, the oldest-Maria (Bartok) who also is smitten with Ray. When Ray proposes to Nina, her father (Slezak) says there’s no way the youngest can get married be before her older sisters get married first. Ray gets to work on finding husbands for the other girls.

Trivia:
-Filmed on location in Rome, Italy
-The first film made after Dean Martin and Jerry Lewis’s partnership started to dissolve.

My review:
“Ten Thousand Bedrooms” is a cute, colorful musical with a great array of stars.
However, it didn’t fair too well in the box offices, resulting in a $1,196,000 for MGM. This was also a disappointment for Dean Martin. This was his first film after his split with Jerry Lewis. While Lewis’s career continued to with hit after hit, Martin wasn’t having as much luck.

Martin’s songs in the film were all fairly forgettable and seemed “safe” for a singer of his caliber. The worst of his songs is called “Money is a Problem,” a duet with Jules Munshin.

The most disappointing part of “Ten Thousand Bedrooms” for me is that we only here Anna Maria Alberghetti sing one song, and it’s only a few lines of the song.

Alberghetti has a beautiful operatic voice and which is completely wasted by not being utilized in the film.

The added bonus of this film is Paul Henreid. His part is small, but Henreid adds something special to all of his films.

The only other downside is that the film is a tad long at two full hours for as fluffy of a plotline.

For a colorful bit of cute escapism, check out “Ten Thousand Bedrooms,” just don’t expect any show stopping songs from either of the leads. 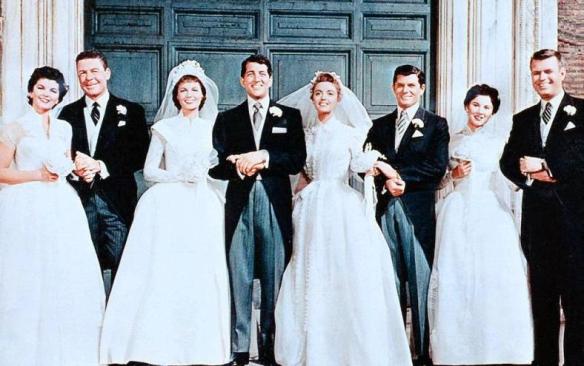 All of the brides in “Ten Thousand Bedrooms”