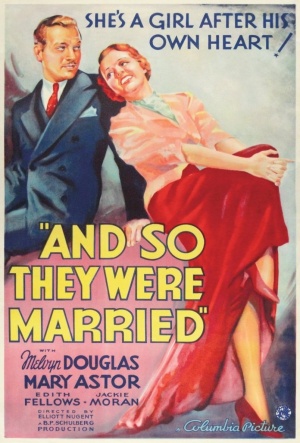 Before twin Hayley Mills were trying to get their parents together in “The Parent Trap” (1961), Jackie Moran and Edith Fellows worked to keep their parents apart in “And So They Were Married” (1936).

In this fun, comedic romp, divorced Edith Farnham (Mary Astor) and her daughter Brenda (Fellows) are spending the Christmas holidays at the gala opening of a ski lodge. Because of Edith’s divorce, both she and Brenda are anti-men.

Widower Stephen Blake (Melvyn Douglas) is also heading to the same lodge, and tailgates their car up the mountain. This leaves both Edith and Brenda with a sour taste and no interest in socializing with Stephen.

After they all arrive at the ski lodge, an avalanche occurs, and the three are the only guests at the new hotel for a few days until the roads can be cleared. Brenda develops a cold, forcing Stephen and Edith to eventually socialize, and they begin to fall in love. 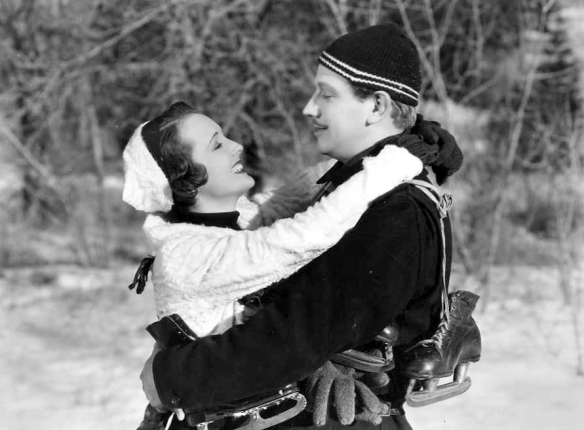 Edith (Astor) and Stephen (Douglas) eventually like each other.

Once the roads open, Stephen’s son Tommy (Jackie Moran) joins him at the lodge. Brenda and Tommy instantly dislike each other and are always fight.

When the two children realize their parents are thinking about marriage, they decide this is terrible and purposefully argue and act like they hate each other to keep them apart.

The two children act like little wretches but make a truce on Christmas Eve and Day, so they are still able to get their presents. However, this backfires when they begin smashing tree ornaments over each other’s heads and eventually short out the Christmas tree lights, causing all electricity in the ski lodge to go out.

Their bad behavior ends up in a fight and the separation of Stephen and Edith. Back home, both children realize they make a mistake as they watch their miserable parents. The children run away to bring their parents back together in their “hour of need.” 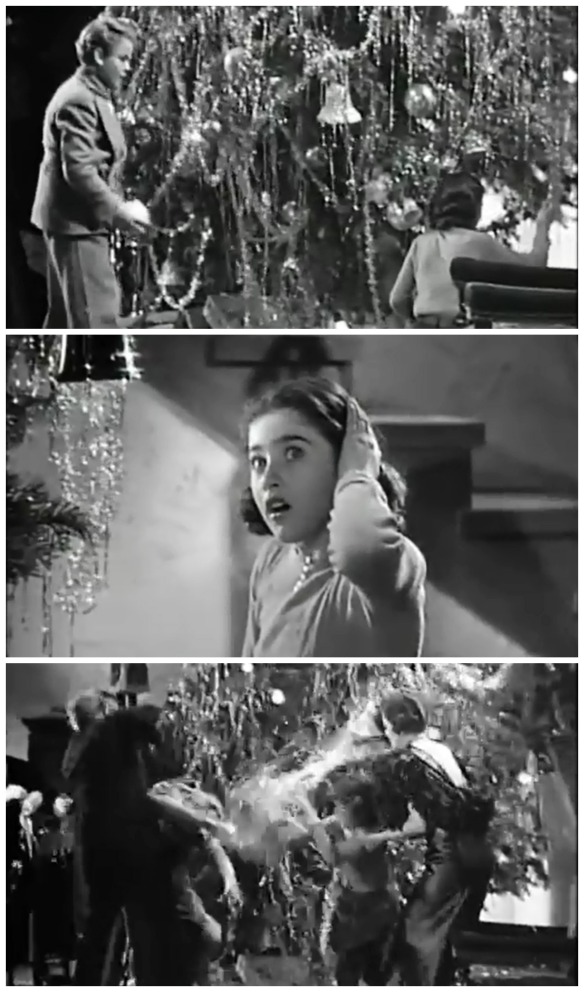 Scenes from the Christmas tree fight: Jackie Moran mistakenly believes Edith Fellow hits him with an ornament, Edith fellows is in shock after their agreement, parents try to separate the fighting children

“And So They Were Married” is a lot of fun. Alluding that Astor and Douglas’ characters end up together isn’t too much of a spoiler, since the title tips you off to what happens. Edith Fellows and Jackie Moran play perfect brats, and Mary Astor and Melvyn Douglas could never be bad in any of their films. Character actor Donald Meek is also delightful in the movie, constantly lamenting that “These things never happened at my hotel in Palm Beach.”

In some films, children acting like brats can be annoying, but I find it funny in this film — maybe because I love both of the actors. I think my favorite gag is when Tommy’s dog — that Tommy has snuck into the hotel — runs downstairs through a group of people. Brenda washed the dog’s mouth out with soap for barking, and guests run screaming, thinking he is rabid.

Christmas is really just a backdrop for “And So They Were Married” and isn’t often discussed. There isn’t any fuzzy, good-will-toward-men holiday sentiment. However, I consider it a Christmas film since the climax deals with a Christmas tree-even if it is two children violently destroying it.

The same year this film was released, Mary Astor was in a nasty custody battle for her daughter Marilyn, with her husband, Dr. Franklyn Thorpe. Thorpe said she was an unfit mother based on torrid diary entries about her affair with George S. Kaufman. A passage was leaked to the press, and it could have ruined her career, but her fans rallied around her, and Astor still ended up on top—winning an Academy Award for “Great Lie” (1941), according to TCM host and film historian, Robert Osborne.

But while Astor and Douglas are the stars of this film, it’s the children that steal the show in this one.

“And So They Were Married” (1936) may not be a classic Christmas film or even a major budget comedy, but it’s an enjoyable little film that you shouldn’t miss. 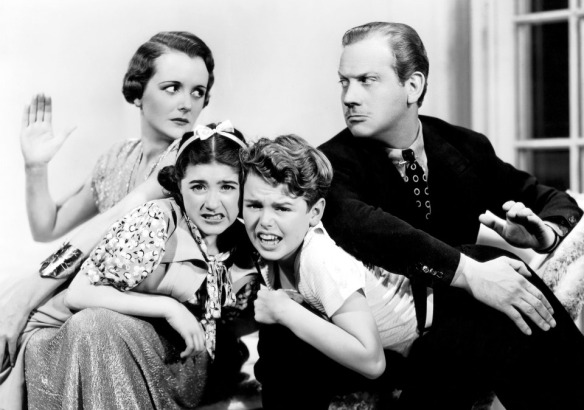 Publicity photo of Mary Astor, Edith Fellows, Jackie Moran and Melvyn Douglas in “And So They Were Married.”