Comet Over Hollywood is starting a new LIFE magazine series. At the beginning of each post, I’ll feature the film article and provide a listing of other magazine highlights. Published weekly starting in November 1936 to December 1972, over 1,800 issues of LIFE magazine was printed. I collect the magazines and decided to share the film news and current events in each film, giving a snap shot of world news and pop culture.

Our first post in the series details January 8, 1945, with a cover photo of “Crochet Togs” worn by Leslie Venable, designed by Greta Plattry.

Movie Making:
Shot No. 279 in the 1944 Warner Brothers film “The Doughgirls” cost $2,000 to shoot and 200 technicians to get it to the screen. The catch? The shot was 18 seconds long and involved only one actor—Joe De Rita—enters a Washington, DC, hotel room and asking if the couch was vacant to sleep on that night during the World War 2 housing shortage.

In all, “The Doughgirls”—starring Ann Sheridan, Alexis Smith, Jane Wyman, Jack Carson, Eve Arden, Charles Ruggles—cost $1,500,000 to make with a total of 742 shots, according to the Jan. 8, 1945, LIFE magazine article “Movie Making: It Is a Complex Business of Machines and Technicians.”

The article details how complicated motion-picture making had gotten by 1944 and how many people it takes to perfect a film before it gets on the silver screen.

“It is the most complicated form of artistic expression in which men engage,” the article says. “Over the years, Hollywood has pied technique upon technique, added skilled worker after skilled worker until now the making of even the simplest movie requires a crew of 300 to 400 carpenters, electricians, plumbers, painters, bookkeepers, film handlers and cameramen.”

“Millions of Dollars of films” in a vault at Warner Brothers. LIFE magazine by Ralph Crane (Scanned by Comet Over Hollywood)

The real stars of the film industry were behind the scenes. The article notes that Warner Brothers must pay special attention to their skilled workers as they won eight Academy Awards recently for “technical and artistic excellence.”

“More than the actors, the technicians are the real citizens of Hollywood,” the article says.

Through a nine page photo spread, the article details shot 279 through the creation of the set, the take of the scene, the cameras and lights used, the lab that develop the film, and sound recording:

Set: “The Doughgirls” was shot indoors on a sound stage. Before construction of the hotel room set was began, art director Hugh Reticker sketched out the scene to plan for lighting, photography and acoustics, even sketching the plan who enters the room and how he would move to the couch. Each set was built in a 125,000 sq. ft. building where everything from “submarines to period furniture” were created, according to LIFE magazine. Photos show artwork painted for the set and cutting plaster to look like word work.

Photo spread by Ralph Crane on “The Set” of “The Doughgirls” by Warner Brothers. Spread looks at how set designs were created and the final product. (Scanned by Comet Over Hollywood)

The Take: The scene with actor Joe De Rita, the fellow looking for a place to sleep, is shot. When the scene is shot, the camera and a sound recorder are documenting. The sound recorder was in a room a few blocks away recording the dialogue, according to LIFE. Before recording, focus is checked with a tape measure reaching from the lens to the actor, lighting is read by head camera man Ernest Haller, and the set is touched up, ridding any dust and nicks. Finally director James Kern starts rolling.

“The Take” photographed by Ralph Crane with actor Joe De Rita in The Doughgirls. (Scanned by Comet Over Hollywood)

The Camera: The camera cost $10,000 and was made by Mitchell Camera Co. in West Hollywood, CA, and it lives in an air conditioned vault. The one used on “Doughgirls” was one of nine owned by Warner Brothers. The camera ran at 90 feet of film per minute, according to LIFE. 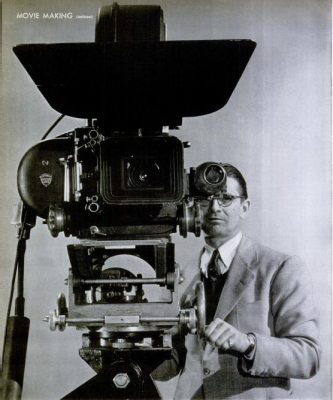 The camera used to shoot The Doughgirls, photographed by Ralph Crane

Lights: In 1944, Warner Brothers owned 36 different kinds of lights and a total of 3,582 individual lights.

Lab: After shot is complete, film goes to Warner’s dark room laboratory. The exposed negative is removed from the camera and the spliced negative runs through printing machines; running through “developer, hypo, washing water and finally a drying cabinet,” according to LIFE. The negative is then made into a positive so movie theaters can run it on their projectors.

“The Lab” by Ralph Crane, showing the development of film at Warner Brothers (Scanned by Comet Over Hollywood)

Sound: Photos demonstration of how the voice of an actor is recorded on the sound machine.

Illustration of how sound is recorded by Ralph Crane.

Bell Telephone System advertisement on flying 30 volunteer cable splicers to Europe after the break through at Normandy. The military needed to build communication lines as the Nazis retreated. “Practically all the Bell System manufacturing facilities are on war work. That’s the way we know you’d want it to be—even though it means waiting for home telephones. If you’re waiting for a home telephone, we’d like to thank you for being so patient.”

Inside Paramount— Promotion of the film “Ministry of Fear” starring Ray Milland and Marjorie Reynolds.

Americans Battle the German Big Push—Five page article detailing the Allies defense against Germany from 1944 to 1945 with personal narratives from 1939 through 1945, and detailing when the Germans broke through in Belgium and Luxembourg.

The purpose of the article was to detail an accurate portrayal of the United State’s German counteroffensive because “the U.S. press and public have again shown a deplorable lack of stability, blowing either too hot or too cold…This is due partly to the U.S. love of big news, whether good or bad, and partially to a thick haze of military censorship…”

“Rome flocks to the black market…”(LIFE/Margaret Bourke-White, Scanned by Comet)

1945 on the Home Front—As 1945 starts, the article details that Americans will have to continue to rationing, civilian production was frozen, draft and manpower tightened. There is a recap of 1944 and how 1945 will be different.

“Housewives were furious last week over the sudden cancellation of their extra food-ration points. But we simply have no surplus of food…Even if Americans do not go hungry in 1945, they may wish they had raised more food.”

Case of Carol Ann—15-month-old baby Carol Ann Berry is waiting on Los Angeles courts to determine if actor Charlie Chaplin is her father. Courts determined if her name should be changed to Carol Ann Chaplin and if Chaplin would have to provide for her future. Chaplin demanded he wasn’t the father, her mother Joan Berry sobbed and Carol Ann “napped, yawned, gurgled…chewed on a compact, played patty-cake, completely ignored the trail. Through blood tests, it was found that Chaplin was not the father.

The Acropolis—War in Athens once more makes a fortress of its classic temples. British paratroopers sit among relics in the ancient temple.

Breakthrough at Saint-Lô—The turning point in the war is detailed through paintings by Ogden Pleissner, an American painter who depicted his war experiences through his art. He is cited here as a “LIFE-artist correspondent.” Pleissner spent three weeks in Normandy with the 9th Air Force and his art is displayed on a 7 page spread. 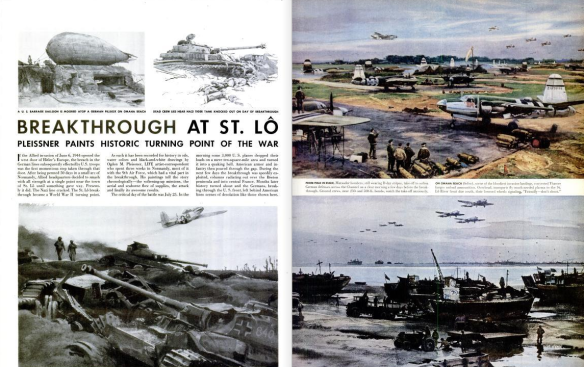 Frank Fay in Harvey—“A mystical ex-vaudevillian teams with invisible rabbit to make a big theatrical comeback.” The article describes the opening of the play Harvey, later made into a film with James Stewart. The piece details Fay’s rave reviews and the start of his acting career as an infant in “Quo Vadis” 40 years prior. “The title role in Harvey is taken by an invisible 6-ft 1.5 in. rabbit. He is pal of Elwood P. Dowd, played by Fay, and follows him around and drinks whisky with him in bars. It is not clear whether Harvey actually exists or is a phantasm brought on by alcoholic delirium,” writes Maurice Zolotow. The article includes a photo of Fay and ex-wife Barbara Stanwyck, who was married to him from 1928 to 1936.

Seven million people saw their homes black out after a hurricane swept the east coast from North Carolina to Main leaving $400,000 worth of damage and millions without electricity.

Modern Living: Fancy Crochets (Cover Story): “An old and genteel art is used to make jaunty, stylish clothes.” Photo spread and article details Greta Plattry, a German woman who arrived in the United States in 1937, to make a success off dresses, gloves and shoulder baring tops—proving crocheting wasn’t just for housewives and bedspreads.

Life Goes to a Cotillion for 99 New York Debutantes—“Girls make a wholesale introduction to society at annual Allied Flag Ball in Waldorf- Astoria Hotel.” The individual debutante New York debut ended when the United States entered the war, which made a move to a large debut.

Best Chesapeake Bay Retrievers—Long Island dog owners who specialize in the breed have a collection of Champions. A brief gives an overview of award-winning Retrievers Shagwong Gypsy, Guess of Shagwong Shagwong Buddy Brown and Shagwong Midget. Bitsy the Dachshund, is also mentioned as one of the Edward Monroe Osborne’s dogs.

What LIFE magazines are you interested in? What would you like to hear more about? Check back this month for another Life Magazine feature.