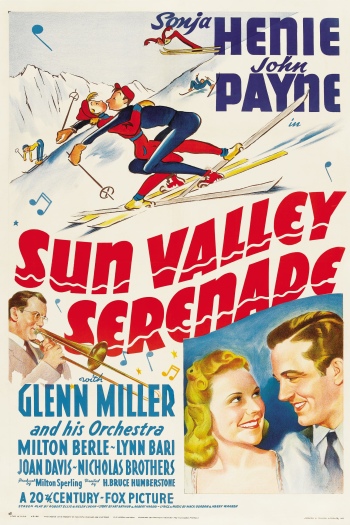 Plot:
A down on their luck band lands a Christmas Eve gig in Sun Valley, Idaho, after they hook up with temper mental singer Vivian Dawn (Bari). To help with publicity for the band, their publicist Nifty Allen (Berle) set up for pianist Ted Scott (Payne) to adopt a European war orphan. While Ted and bandleader Phil Corey (Miller) have prepared for a baby orphan, their adoptee is fully grown Norwegian Karen (Henie). When the band leaves for Sun Valley, Karen sneaks along, threatening a budding romance between Ted and Vivian.

Trivia:
-The plot line came directly from producer Darryl F. Zanuck. Zanuck was at the Sun Valley Idaho ski resort and wanted to produce there for a Sonja Henie vehicle, according to TCM host Ben Mankiewicz.
-The song “Chattanooga Choo Choo” was introduced in “Sun Valley Serenade.” The song became No. 1 on the charts on Dec. 7, 1941, and held that position for nine weeks, according to Music of the World War II Era by William H. Young, Nancy K. Young
-In a TCM interview, Fayard Nicholas said everyone was waiting to hear this new song “Chattanooga Choo Choo” and when they started playing it, he thought “What the heck is this? I didn’t like it at all.” Nicholas said he was sitting beside Glenn Miller and asked him what he thought of the song and Miller said “I think it stinks.” Nicholas said “You never know what will be a hit, because that was his biggest seller!”
-The first time Glenn Miller’s band was part of the storyline.
-Joan Davis’ role was originally much larger, including a comedic ice skating performance, and it all ended up on the cutting room floor. She is in the film for less than a minute, according to Joan Davis: America’s Queen of Film, Radio and Television Comedy by David C. Tucker.
-Dances choreographed by Hermes Pan
-Lynn Bari is dubbed by Pat Friday 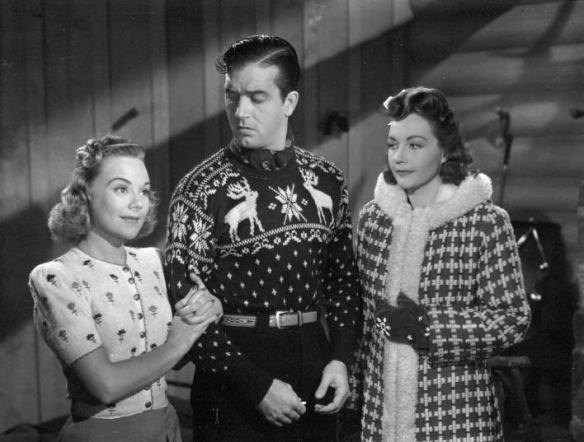 My Review:
“Sun Valley Serenade” is a delight! The only issue with this film is that it hasn’t been released on DVD.
It has everything: humor, fantastic music from Glenn Miller, handsome John Payne and ice skating sequences from Sonja Henie.
The highlight of this film for me was Glenn Miller’s music with Tex Beneke’s vocals. Prior to this film, I didn’t know that one of Miller’s most famous songs, “Chattanooga Choo Choo,” premiered in a film. The song begins with Beneke singing the song and then the wonderful Nicholas Brothers and Dorothy Dandridge dance after the song was performed.
This was also the first film that Glenn Miller was a character and a large role of the plot, rather than just a featured musical performance. It’s a real treat to see him speak and act, since he had such a short life.
Similar to the novelty Esther Williams’ swimming films in the 1940s and 1950s were Sonja Henie’s ice skating films. Nothing like the skating performances of the Norwegian Olympic gold medalist had ever been seen before on film prior to Henine’s first movie in 1936.
The sport of ice skating has changed a great deal since that time, so Henie’s figure skating may look awkward compared to what we see now at the Olympics. However, I still think her performances are fascinating and beautiful.
It’s almost surprising that Henie only has one major number in this film and another small skating showcase, but I think that had to do with Zanuck’s dislike for the ice skater. It’s also disappointing that Joan Davis’ role was diminished as much as it is.
If you love Glenn Miller’s music and figure skating, this is a movie you should catch. Sure it’s alot of fluff and not an Academy Award Best Picture, but it’s tons of fun.