Each of our February Musical Mondays will be Academy Award-winning films, taking part in the 31 Days of Oscar event.

Plot:
Biographical film of singer Jane Froman (Hayward). The film chronicles Froman’s rising star as a popular singer in the 1930s and 1940s through a life-changing event: a 1943 plane crash during a USO tour. The film looks at how Froman overcame lifelong disability to continue her career and also inspire the soldiers overseas during World War II. 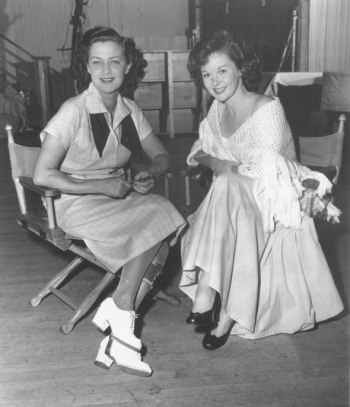 -Susan Hayward’s voice was dubbed by the film’s topic, Jane Froman, and Froman served as technical director for the film.

-Jeanne Craine was considered for the role to portray Jane Froman, but Froman chose Susan Hayward whose “looks she preferred.”

-Multiple studios wanted the rights to Froman’s story and she chose 20th Century Fox as the studio to portray her life, according to Jane Froman: Missouri’s First Lady of Song by Ilene Stone. The film’s soundtrack with Froman’s voice topped the charts, according to Stone’s book.

-To prepare for the film, Susan Hayward and Jane Froman went over the script together in her dressing room and Hayward would ask her questions about her background, and Susan would study Froman’s motions and mannerisms, according to Brooklyn’s Scarlett: Susan Hayward: Fire in the Wind

-Costume designer Charles Le Maire said it was the most expensive wardrobe he ever designed and specifically used colors to go with Hayward’s red hair, according to Arceri’s book. 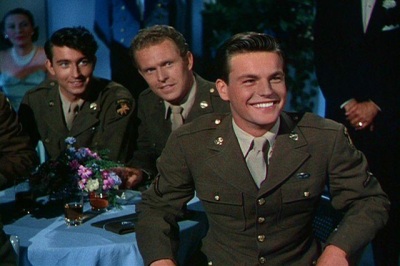 Robert Wagner in “With a Song in My Heart”

One of Susan Hayward’s many fabulous outfits.

My review:
Many biographical musical films reviewed on Comet Over Hollywood’s Musical Monday series are usually panned for being inaccurate. But “With a Song in My Heart: The Jane Froman Story” (1952) is an exception.

This colorful star-studded film is visually appealing, kept my interest throughout the whole two hours and felt more human than hokey than most biographical films (See: Look For the Silver Lining or The Eddie Cantor Story). But the biggest take away for me is how seemingly accurate it appears to be, and I feel that had a largely to do with Jane Froman’s heavy involvement in the film.

David Wayne with Susan Hayward in “With a Song in My Heart.”

Singer Froman not only weighed which studio she wanted to interpret her story but even had a say in her leading lady. Then, not only did Susan Hayward and Froman sit for hours discussing the script and Froman’s background, Hayward cared enough about the role to closely observe Froman’s mannerisms. Hayward herself said this was the first role at 20th Century Fox that she was worth it’s weight since “My Cousin Rachel,” which starred Olivia De Havilland and Richard Burton, according to Susan Hayward: Her Films and Life by Kim R. Holston.

“Jane really held my hand (while the film was shot),” Susan told Joey Bishop, according to the book Susan Hayward: Her Films and Life by Kim R. Holston

Singing voice dubbing in golden era musicals isn’t a rare concept, but it was appropriate in this case. Jane Froman dubbed Susan Hayward with her own voice, which I felt was the right thing to do. This was also done in “The Jolson Story” and should have been considered in “The Helen Morgan Story.”

Hayward even said, “What would the film have been without Jane Froman’s voice on the soundtrack?”

My only criticism is that Hayward’s appearance didn’t quite match up with Froman’s operatic voice.

Susan Hayward as Jane Froman on a plane in 1943.

To give a little more background on the film’s subject (SPOILERS): Singer Jane Froman was in a plane crash in 1943 during a USO show. At the beginning of the flight, she switched seats with Tamara Drasin (performed Smoke Gets in Your Eyes in the 1933 Broadway musical Roberta) and Drasin was killed–something Froman felt guilty about for the rest of her life. Though Froman survived, she was severely injured and almost lost her leg. Though she was able to keep her leg, it ailed her for the rest of her life and she underwent 39 surgeries. Froman was determined to keep her stage career, though her leg sometimes gave her troubles. She went back to Europe in 1945 on USO tour. Due to her pain, she did have a period of addiction to pain medicine and alcohol, though she overcame this. Froman had a TV career in the 1950s and retired in 1961. She passed away in 1980.

Thelma Ritter in “With a Song in My Heart”

The film is a retrospective, starting at an award ceremony for Froman and looking back at her career. Before going back to the award ceremony, the film really ends at the 1945 USO show, which is really the only hokey part of the film. Froman performs an American medley and a soldier pops out of the crowd doing an Al Jolson impression, which is really a bit odd.

Surprisingly, the names of Froman’s husbands’ were their real names. David Wayne played Donald Ross, who was married to Froman from 1933 to 1948, and Rory Calhoun played John Burn, who was married to Froman from 1948 to 1956. It is sometimes rare for ex-spouses to be named in these biographical films, as they usually don’t want to be associated with the film or the individual. A key example is Evelyn Keyes’ character in “The Jolson Story.” The character is Ruby Keeler, but is named Julie Benson in the film.

While the “Theater Arts” said the film was more human, Bosley Crowther of the “New York Times” said, “One would not call her performance either subtle or restrained.” While I think Susan Hayward is a great actress and did a good job, I agree with this. She brought depth to the role, but not without it feeling a bit forced.

Along with Hayward in the film is the wonderful Thelma Ritter, who steals the show; David Wayne, who ends up playing a great louse; and Rory Calhoun, who is mainly nice to look at. Lyle Talbot has a brief role and I thought it was really sad that he wasn’t even billed. Una Merkel also has a brief, but memorable role in the film. This is one of Robert Wagner’s first films and he also has a very touching role as a soldier.

Hayward lost the Academy Award to Shirley Booth in “Come Back Little Sheba” and Thelma Ritter lost to Gloria Grahame in “The Bad and the Beautiful.”

This is really a wonderful movie, because it doesn’t gloss over the struggles of a real woman. Jane Froman isn’t a name well recognized today, but this film allows you to have a quick glimpse at her difficult but brave life.

5 thoughts on “Musical Monday-Academy Award Winners Edition: With a Song in My Heart: The Jane Froman Story (1952)”