In the film industry, the Academy Award is the symbol of the most outstanding and top-notch artists in the film industry, from cinematographers to sound to acting. So it’s no surprise these gold Cedric Gibbons-designed statues are auctioned for hundreds of thousands of dollars. But some prefer to take a different route of obtaining an Academy Award for their memorabilia collection: theft.

A few classic stars were relieved of their Oscars–Some a prank, some were returned and others still are surrounded with mystery.

Alice Brady: Best Actress in a Supporting Role for “In Old Chicago” (1937)
Character actress Alice Brady won Best Actress in a Supporting Role for the 1937 film “In Old Chicago.” The ceremonies were held on March 10, 1938, at the Biltmore Hotel in Los Angeles. Brady had recently broken her ankle on the set of “Goodbye Broadway” (1938) and was not able to attend the ceremony, according to Actress of a Certain Character by Axel Nissen. Her Oscar was accepted by a man who said he was acting on her behalf, who disappeared with the Academy Award plaque and the award was never found.

The Academy issued a replacement award for Brady later that month, which was presented to her by actor Charles Winninger in an informal ceremony, according to the United Press news brief, “Alice Brady Given Academy Award,” published on March 23, 1938.

Brady’s replacement was later sold in 1993 in an auction, according to according to an Oct. 2, 1992, article by Bruce Chadwick in the New York Daily News “More Academy Awards are finding their way to the auction block.”

Charlie Chaplin: Honorary Academy Award for “The Circus” (1928)
Charlie Chaplin won three Oscars:
• His first was an honorary award in 1929 for “The Circus” for “For versatility and genius in acting, writing, directing and producing The Circus. Though nominated for best actor, the academy decided to remove Chaplin’s name from the competitive classes and instead award him a Special Award.”

• In 1972, Chaplin won a second honorary award for “the incalculable effect he has had in making motion pictures the art of this century.”

Charlie Chaplin in 1972 with his honorary Oscar. This is not the award that was stolen.

• In 1973, he won an Academy Award for Best Music for “Limelight” (1952), which was shared with Ray Rasch and Larry Russell. The film was not released in Los Angeles until 1972– the Academy rules at the time still made the film eligible.

In February 2015, Chaplin’s first honorary award from 1929 for “The Circus,” was stolen. The statue, valued at $1 million, was taken along with a set of $90,000 pens. Police said the thieves were knowledgeable, informed and it was a targeted break-in at offices of the Chaplin Association in France, according to Le Parisien. Those were the only two object targeted.

Before the theft, the piece was going to be lent to a Chaplin museum in Switzerland, according to the Hollywood Reporter and the Telegraph.

“Sadly to say, no, there has been no news of the Oscar that was stolen,” The Chaplin Association told Comet Over Hollywood in an e-mail on Feb. 5, 2016.

Bing Crosby: Best Actor for “Going My Way” (1945)
Before Bing Crosby became one of the most popular singers and actors in the United States, he pursued a career of law at Gonzaga University. Crosby was enrolled from 1920 and dropped out to break into show business. However, Crosby was generous to Gonzaga throughout his career. This included funding a $750,000 library in 1957, which still holds all of his records, awards and memorabilia, according to the university’s website.

One piece of memorabilia is Crosby’s Academy Award for Best Actor awarded for the film “Going My Way” (1945), which was stolen in 1972.

The Academy Award was stolen from the Crosby Library at Gonzaga University and was replaced with a three-inch high Mickey Mouse statue, according to Associated Press brief “Oscar stolen from library” on April 26, 1972.

Police said the theft happened over the weekend and appeared to be a prank, because no other items were bothered. The police estimated the value of Bing Crosby’s Oscar to be $75, according to the April 26, 1972, article.

A follow up May 3, 1972, Associated Press article headlined “Bing Crosby’s Oscar found in college chapel” reported the Oscar was found in the campus chapel by a priest. The school newspaper also ran an anonymous interview with the thief who said “I wanted to make people laugh.” 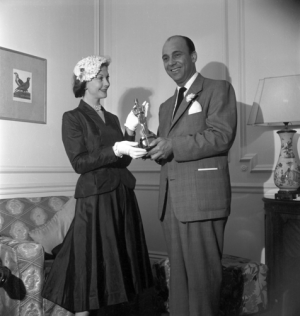 Actress Vivien Leigh won two Academy Awards for Best Actress for playing southern belles: Scarlet O’Hara in the 1939 film “Gone with the Wind” and Blanche Dubois in the 1951 film “A Streetcar Named Desire.”

In March 1953, the home of Vivien Leigh and her husband Laurence Olivier was broken in to, and her “Streetcar” Academy Award was stolen. Clothing and silverware were also taken, according to a London Associated Press article, “Thieve Steal One of Vivien Leigh’s Picture Oscars,” published on March 31, 1953.

To learn more about Vivien Leigh, visit author and Leigh historian Kendra Bean’s website, who shared this information with us.

When McDaniel was diagnosed with breast cancer and passed away in 1952, she left her Academy Award to the Howard University theater department in Washington, D.C. This was in a thank you to Howard University for students who honored her with a luncheon after she won her Oscar in 1939. 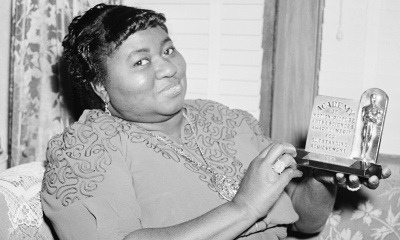 Hattie McDaniel with her Academy Award for Best Supporting Actress which has been missing since the 1960s.

But since her donation to the school, the Oscar has disappeared. There is a great deal of speculation and rumors of what may have happened: Some say it disappeared in the 1960s during Civil Rights protests and others go as far as to say students threw it into the Potomac River—though there is no proof.

“There were a lot of things — a lot — that ended up being stolen or ‘went missing,’ because there was an attitude to try to get rid of the past,” Geoffrey Newman, a Howard alumnus and theater chairman who is now a dean at Montclair State University in New Jersey, told the Washington Post in 2010. Newman is certain the Oscar “was stolen by an irate student who wanted to erase Hattie McDaniel.”

Howard University Theater Major Charles Buddy Butler, who graduated in 1968, says he remembers seeing the plaque in a glass-enclosed case in the greenroom.

There are no paper trails of the Academy Award arriving at Howard University, and some simply think it was overlooked or misplaced, since it was a plaque rather than a statue (The Best Supporting Actor award began in 1936 and starting in 1944, the actors received full sized statues).

Other rumors swirl that students protective of memorabilia took it, but no one has answers to the whereabouts of the award. Howard University requested a replacement in 2005, but the Academy refused; sending a photo and commemorative stamps.

Bob Hope presents Margaret O’Brien with the Academy’s first “Oscarette” for best performance of a child actress in 1944.

When Margaret O’Brien received her Oscar, she said she wasn’t really that interested in it at the time.

“I was more excited about seeing Bob Hope. I was more interested in meeting him than the Oscar that night,” she said, quoted in the biography “Margaret O’Brien: A Career Chronicle and Biography by Allan R. Ellenberger.”

In 1958, O’Brien’s mother, Gladys, was diagnosed with heart disease and a maid was hired to help around the house. One of the maid’s responsibilities was to polish the awards in Margaret’s trophy room, which included her Oscar. One day, the maid took the awards home to polish and didn’t return for three days. Gladys fired the maid and told her to return the awards. A short time after, Gladys was put in the hospital for her heart condition and the awards were forgetten. When Margaret reached out, the maid had moved, according to Ellenberger’s book.

Nearly 40 years later, two baseball memorabilia collectors—Steve Meimand and Mark Nash—returned the award to O’Brien in 1995. The men had bought it at a swap meet in Pasadena, according to a Feb. 9, 1995, news brief in the “Lodi New-Sentinel.”

“It’s amazing” about being reunited with the award,” she said. “I never thought it would be returned. I had looked for it for so many years in the same type of places where it was found.”

In 2001, O’Brien donated her Oscar to help the Sacramento AIDS Foundation.

Comet Over Hollywood is taking part in the 31 Days of Oscar event.