Plot:
Princess Marie (MacDonald) is ordered by her uncle (Dumbrille) to marry elderly Don Carlos (Kingsford). To avoid this, Marie dresses up like her maid, who plans to sail on a ship headed to New Orleans that is full of brides for the colonists. En-route to New Orleans, the ship taken over by pirates who kill the crew and turn their attention to the women. Before this can escalate, a troop of mercenaries rescue the women and get them safely to New Orleans. The leader of the troop Warrington (Eddy), takes a fancy to Marie, who does not return the feeling. The women are welcomed by the Governor (Morgan) and his wife (Lanchester), and Marie announces that she doesn’t want to marry anyone. While she is disgraced and housed in a different area of the town, the Governor is sure he has seen her somewhere before. 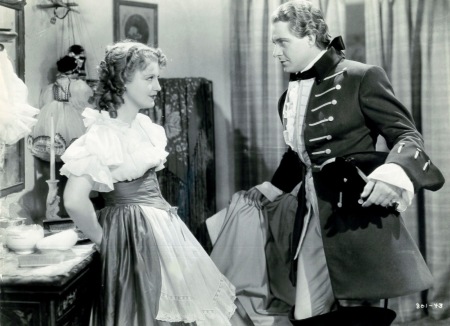 Trivia:
-The first of the eight films starring Jeanette MacDonald and Nelson Eddy.

-Nelson Eddy’s first starring role. Director W.S. Van Dyke knew Eddy was struggling and allowed Eddy to record his songs in a studio with a full studio and lip sync, rather than record his songs on camera. Eddy’s voice coach was kept close to him and even had a role as an innkeeper in the film. Van Dyke played pranks on Eddy to help him loosen up, according to Nelson Eddy: America’s Favorite Baritone: An Authorized Biographical Tribute by Gail Lulay.

-Producer Hunt Stromberg warned W.S. Van Dyke and L.B. Mayer that “Oh Sweet Mystery of Life” was Forest Lawn Cemetery’s theme song, which could harm the film. Thankfully, it did not, according to Lulay.

-Adaptation of the Victor Hebert and Rida Johnson operetta, which opened in New York in October 1910, and was Herbert’s greatest success. In 1955, the operetta aired on television in a live broadcast.

Highlights:
-Jeanette MacDonald disguised with glasses trying to get aboard

My review:
I have seen all of Jeanette MacDonald and Nelson Eddy’s musicals together and this one is one of my favorites.

While “Naughty Marietta” is filled with beautiful music, it is also filled with honest-to-goodness belly laughs. For example, when Jeannette MacDonald puts on a disguise to board the ship is a riot!

The supporting cast is also superb. You never can go wrong with Frank Morgan, Elsa Lanchester or Akim Tamiroff.

Prior to “Naughty Marietta,” Nelson Eddy had not had any starring roles. His biggest role up to this point was a small singing part in “Dancing Lady.” Jeannette MacDonald had already been in 30 films.
It’s often remarked that Nelson Eddy is stiff and wooden in his films, and this may be true, but I find him to be charming and entertaining as a wisecracking soldier. It’s obvious why Metro-Goldwyn-Mayer went on to cast the two in so many films: Their chemistry and on-screen banter is amazing.

Even the March 31, 1935 New York Times review by Andre Sennwald is complimentary of the film, calling it “gayley romantic and rhapsodically tuneful”(the Times reviews are rarely complimentary to the musicals Comet writs about.)

I have called many a Musical Monday “delightful,” and at the sake of overusing the word, “Marietta” is certainly a delightful one that created one of film’s most memorable screen teams.

Comet Over Hollywood is taking part in the 31 Days of Oscar event.