Plot:
Orphan Betsy Brown (Temple)is adopted by friends of her parents- Pop Shea (Edward Ellis) and his daughter Barbara (Phyllis Brooks) who run a hotel for performers. However, the hotel lead is held by Sarah Wendling (Oliver) and her brother Willoughby (Meek), and Sarah hates the show business tenants and looks for every way to shut down the hotel. However, when Sarah’s nephew Roger (Murphy) meets Betsy, he’s instantly taken with the child and finds himself attracted to Barbara. Roger sets out to help the show business hotel stay open.

” that she felt this film was bland and her mother was annoyed by the low budget.
-Around the time of “Little Miss Broadway,” Fox studio head Darryl F. Zanuck mentioned that Shirley Temple was getting chubby and said her mother needed to stop feeding her candy, according to Temple’s autobiography. Joan Crawford visited Shirley on the set of “Little Miss Broadway,” and had a box of candy. Temple recalled the Joan Crawford said, “Do you like candy or will it make you fat?”

performed by Shirley Temple
– How Can I Thank You

performed by Shirley Temple
– We Should Be Together

My Review:
Since 1934, Shirley Temple was America’s Sweetheart and number one in the box office. But by 1938 at age 10 years old, her popularity was waning. However, even though this week’s Musical Monday- Little Miss Broadway- was towards the end of Shirley’s heyday, I still enjoy this film.

Admittedly, this film is fairly forgettable among Shirley Temple’s other films, but it has an excellent supporting cast to back up Shirley Temple. First off, magnificent and largely underrated song and dance man George Murphy is a lead in the cast flanked by hilarious Donald Meek and Edna Mae Oliver playing his relatives. Meek and Oliver’s humor and Murphy’s fancy footwork really make this film for me. 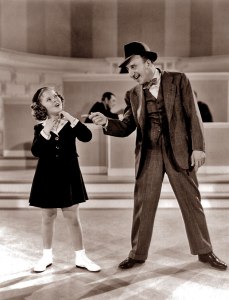 Jimmy Durante is also in the film, though he doesn’t have as much screen time as some of the other character actors but still provides his famous humor.

However, I have to say–as much as I adore Shirley Temple, she really didn’t sing or dance that well. I know I’m sinning just for saying that, but it’s honestly true.

It is obvious that “Little Miss Broadway” is trying to recapture Temple’s earlier charm, as Robert Osborne mentioned, by making her an orphan and singing and dancing her way through the film. While Temple was growing out of these roles, this movie still works as an entertaining piece. It’s only an hour and 12 minutes and has some snappy music and funny scenes. 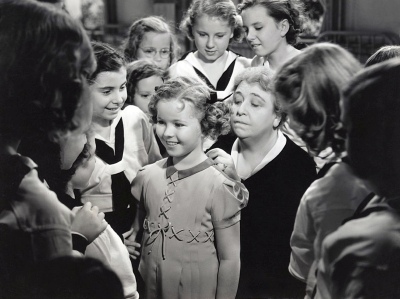