Film composer Bernard Herrmann is mostly known for a film that he originally disliked.

“When we left the screening of ‘Psycho,’ he said, ‘Wasn’t that the biggest piece of crap you’ve ever seen?’” said the film composer’s eldest daughter, Dorothy Herrmann. “Daddy had no use for Psycho until it became a cult classic.”

However, those shrieking, staccato violins that played during a rather violent shower scene is may be what he’s best known for. 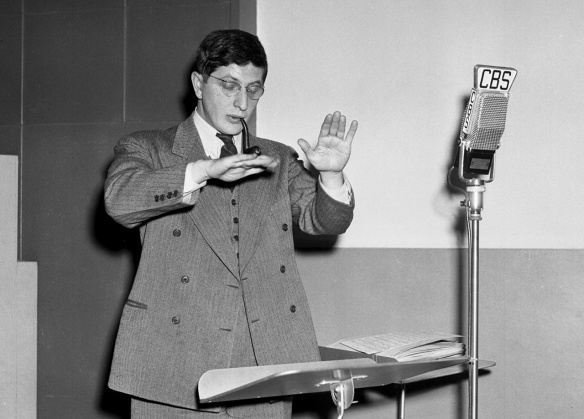 Dorothy Herrmann spoke last weekend during a Bernard Herrmann festival—from April 15 through April 17—in Washington, D.C. The PostClassical Ensemble, Georgetown University, AFI Silver and the National Gallery of Art co-hosted one of few festivals that celebrates the composer’s life and career in film, radio and symphony.

Along with the weekend celebration, AFI Silver screened films scored by Herrmann throughout the month including “Hangover Square,” “Vertigo” and “The Bride Wore Black.”

Along with myself, fans and Herrmann’s family traveled from Kentucky, New York, Mississippi, North Carolina, California and Pennsylvania, to pay tribute to the composer. During the weekend festival, Herrmann historians and musicologists delved into the composer’s work.

I was first introduced to Bernard Herrmann at age 14 when I asked my parents to record “Psycho” off the Women’s Entertainment Network, an odd channel to be playing this film. I was just starting to explore classic films during this time and was also a big fan of Henry Mancini, so I was in the habit of looking for who scored the film I was watching. Herrmann soon became a recognizable name and my ears perked up whenever I heard host of Turner Classic Movies Robert Osborne mentioned Herrmann.

However, while I’m familiar with nearly all of Herrmann’s films—including ones Herrmann hopes we forgot such as “Blue Denim” and “Joy in the Morning”—I hadn’t had much of an opportunity to dig into his CBS Radio Symphony career.

That’s one thing the Bernard Herrmann Festival allowed me to do.

Much of the festival focused on Herrmann’s CBS Radio career. He started at CBS as a staff conductor and eventually graduated to chief conductor of the CBS Symphony Orchestra. The festival looked at his partnership with writer Norman Corwin, who partnered with Herrmann on many of his radio dramas. Most notably, they worked together on 1941’s “We Hold These Truths”—a star studded radio program celebrating the 150th anniversary of the Bill of Rights. This program aired one week after the 1941 Pearl Harbor attacks. 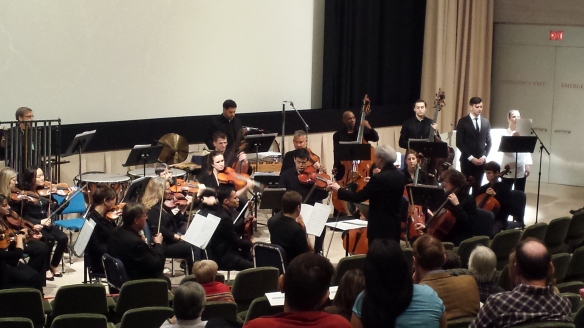 Some of the highlights throughout the festival included members of the Georgetown University Orchestra performing Herrmann’s CBS radio score for the 1944 World War II drama “Untitled,” written by Norman Corwin. Georgetown University performed the roles which is about a soldier who has died.

Another highlight was hearing the PostClassical Ensemble perform Herrmann’s gorgeous score for the radio program “Whitman,” also written by Norman Corwin. This also was performed by a live actor.

While we constantly hear discussions about Herrmann’s work with Alfred Hitchcock, it was interesting and refreshing to hear his radio scores, which often ignored or forgotten. Of course as a classic film fan, I admittedly would have loved to hear recordings of “Untitled” by Fredric March and “Whitman” by Charles Laughton, as they were originally performed.

Along with the AFI Silver screenings, “Psycho” was screened at the National Gallery of Art.

I particularly enjoyed listening to Neil Lerner analyze different musical scenes in Herrmann’s films. For example, he broke down the marriage montage at the breakfast table in “Citizen Kane.” Lerner pointed out that the scenes starts with a happy, lilting waltz and ends with the same waltz that has taken an icy tone. 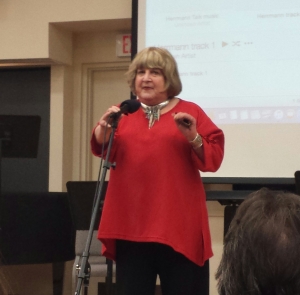 Another interesting fact from Lerner: Did you know how the sound was made when Mr. Scratch (the Devil) appears in “The Devil and Daniel Webster”/ “All that Money Can Buy”? It is the sound of humming telephone wires. Herrmann went out to the San Bernadino Valley at 4 a.m. to record the sound for the film.

But most of all, I enjoyed hearing Dorothy Herrmann speak about her father—how he was as a man and a dad. She also shared the end scene of “The Ghost and Mrs. Muir”—Bernard Herrmann’s personal favorite score—to exhibit how well the music aids the scenes.

“This is a movie I could watch again and again,” she said.

I also had the pleasure of meeting Dorothy and her sister, Wendy, one of the evenings of the festival.

During the festival, Dorothy told humorous anecdotal stories about her father, such as when she destroyed the front bumper of his 1941 Packard and her dad took it in stride. “These things happen in Hollywood,” he said. Or when he was furious about the sound when he took his two daughters to see “5 Fingers,” and argued with the projectionist at an Arlington, VA, movie theater.

“He was known for his temper, but he also got over it in five seconds,” she said.

It was a treat to attend this rare festival that celebrates the life and work of composer Bernard Herrmann. I knew about Herrmann’s radio career but had only heard a few of the programs through YouTube. Hearing the scores played by top-notch orchestras was really something special. This festival proved once again that Herrmann has a dedicated following—which has also been exhibited through sell out international orchestral performances and live film accompaniments. I hope to see more future festivals in the future that highlight every facet of his work.