Plot:
Sylvia Bruce (Davies) is board as a French teacher at Briarcroft’s School for Girls. After hearing a romantic tune on the radio performed by Bill Williams (Crosby), Sylvia packs her bags to head out to find excitement, romance and to thank Bill for inspiring her. Bill is heading to Hollywood to make a film with French actress Lili Yvonne (D’Orsay) and Sylvia follows him.

by Gary Giddins.
-Released in theaters on Dec. 22, 1933.
-Bing Crosby introduced six songs written by Nacio Herb Brown and Arthur Freed, including the song “Temptation,” according to Just Remember This by Colin Bratkovich.
-Clips featured in “That’s Entertainment” (1974), reviving interest, according to Bing Crosby: A Pocketful of Dreams – The Early Years 1903 – 1940 by Gary Giddins. 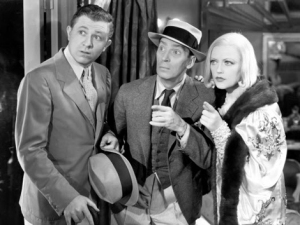 In the film, Crosby introduces six Brown/Freed tunes, including the seductive “Temptation,” and sings a total of seven songs. Heart didn’t want Crosby in this film because he didn’t like his singing style but Davies insisted. If a weaker leading man or singer had been Marion’s leading man, then maybe she would have been the notable figure in this film. However, I can’t imagine anyone but Bing Crosby singing “Going Hollywood” or “Temptation” (other than Perry Como approx. 10 years later).

The plot of this film is rather thin-it really is about a young woman stalking a singer to first thank him for making her realize what she wants out of life after hearing him on the radio. But then she decides she’s in love with him and follows him until he also loves her.

But while the storyline isn’t anything to brag about, the musical numbers are lavish and entertaining. My favorite is the “Going Hollywood” sequence while everyone in Grand Central station–from the reporters to the porters–are tap dancing and looking for Bing Crosby’s character.

Another entertaining scene is Marion Davies’ “We’ll Make Hay in the Sunshine” dream sequence where she and Bing Crosby are dressed in farm clothes. This is mainly entertaining to me because we get to watch Bing Crosby do a barn dance.

One reason while this ends up being Bing Crosby’s film is because he can run circles around Davies when it comes to singing and dancing. While I love Marion Davies, she is a mediocre singer and dancer. Those who give Ruby Keeler a rough time for her dance movies clearly have never taken a gander at Davies’ dancing in this film.

Of course, I can’t go without mentioning the humor that character actors Ned Sparks, Stuart Erwin and Patsy Kelly bring to this film. It felt like they weren’t in it enough, though.

The first time I watched this movie at age 14 in 2003, I didn’t care for it. This week was the first time I revisited it since and I found I liked it better. This is a fun short, entertaining little film with top-notch music.