Plot:
Shot as if you are watching the Broadway play, the plot follows a demanding TV star Jerry Biffle (Silvers) trying to boost the ratings of his flailing TV program. He casts attractive young people Sally Peters (Lynn) and Cliff Lane (Scholl) as leads to raise ratings. It gets complicated when Sally and Cliff fall in love and Phil also loves Sally.

Trivia:
-Film adaptation of a 1951 Broadway musical show that also starred Phil Silvers. Phil Silvers won a Tony Award for Best Performance by a Leading Actor in a Musical in 1952 for “Top Banana.” The show ran for 350 performances.
-Phil Silvers said that the film was shot in a day and a half and in one continuous shot.
-Many of the original Broadway cast members were in the film.
-Music by Johnny Mercer and Hy Kraft
-Shot in 3D but released in 2D 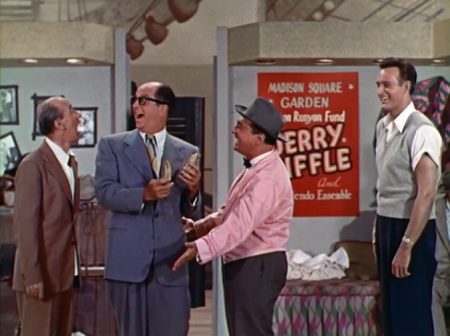 Notable Songs:
None where memorable enough to note.

My review:
It was a struggle to get through this movie.

I started “Top Banana” without reading anything prior about the movie or its origins so I was a little confused. “Top Banana” was a hit Broadway show that ran 350 performances. It was adapted into a film, but unlike other Broadway shows created to fit the silver screen such as Oklahoma or Little Abner, “Top Banana” was shot just like you’re watching the Broadway play – sets, entrances, actors, curtain call and all.

That’s where I was confused: I knew the plot but I wasn’t sure if we were seeing the TV show Silvers is putting on or the plot outside of the TV show. Turns out that it’s all the above.

“Top Banana” is interesting, because I have never seen another musical shot as if I was watching a play. The cinematographer literally set up a camera facing a stage (mixing in some medium, long and close shots) and let the film roll as the cast put on the same show as it was performed on Broadway. It was even shot in 3D so the audience would feel like they were at the theater. However, that’s about where the novelty ends for me.

A little Phil Silvers can go a long way, and when he’s the lead of the film, it’s exhausting. I don’t necessarily dislike Phil Silvers, I’m just not a fan of his style of comedy.

The film begins with a song and dance number when someone yells cut. We learn that this is a rehearsal for a TV show that went well into the night as they try to perfect performances to raise ratings. Phil Silvers enters, frustrated that the show is failing. Since this was shot like a play, the scenes were very long. For example, the scene when Phil Silvers enters into his dressing room goes on for 20 minutes without cutting. 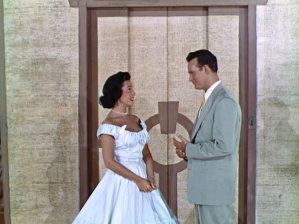 We then are taken to meet our two secondary leads played by Judy Lynn and Danny Scholl. We go back and forth from plot to musical numbers and rehearsals from the TV show. This back and forth is what made it confusing for me at first–I wasn’t sure what was supposed to be the real life plot and what was supposed to be the TV show plot. Eventually I figured it out though.

Other than Phil Silvers, Rose Marie and Jack Albertson, movie fans won’t recognize many of the other actors in this film. Judy Lynn only appeared in three film or TV appearances and mainly seems to have performed on Broadway. I wasn’t a fan of her singing style, because it sounded like she was shouting.

Though Johnny Mercer wrote the lyrics to the songs, they weren’t his typical toe tappers. None of the songs really grabbed me and mostly felt frantic. There were some interesting dance numbers though.

The original run time for this film was 100 minutes but current prints (including the TCM print) are 84 minutes. This explains some odd jump cuts in the middle of some numbers. Despite the unexpected edits, I can’t say I was upset that this movie was 16 minutes shorter.

Despite my unenthusiastic review, it seems that movie critics enjoyed this movie at the time. The usually grumpy New York Times film critic Bosley Crowther (who spits on most of the musicals I enjoy in his original reviews) gave “Top Banana” a glowing review. 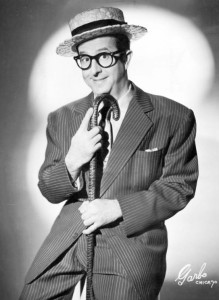 “Mr. Silvers is in it, and so long as he is romping around, shouting his head off at people and prodigally tossing out gags—which, we are happy to inform you, is just about all the time—there is gaiety and bounce in ‘Top Banana.’ It is a very amusing mess of film,” Crowther wrote in his Feb. 20, 1954, review.

Crowther’s only complaint is that the “color is shabby” and it’s cheaply shot, but he still says it’s hilarious. I wonder if it’s because “Top Banana” was such a hit at the time that people were still thrilled with the film version at the time. We could compare it to the “Wicked” or “Hamilton” of today: Huge Broadway hits and even if a movie version was released that wasn’t great, audiences would still love it at the time. However, it didn’t do well financially, so maybe Mr. Crowther was just being kind.

While this is one of those movies I could say I “suffered through,” it is indeed “a fascinating curio” (to quote Leonard Maltin) with the way it was shot. If you are a theater fan or enjoy film novelties, check it out. If not, steer clear.