Gidget and Moondoggie’s romance started onscreen in 1959 on the beaches of Malibu.
Though the real Gidget didn’t marry “Moondoggie,” the fictional one tied the knot in a 1972 TV movie, “Gidget Gets Married.”

At the end of the TV movie “Gidget Grows Up” (1969), Gidget and Jeff get engaged. Two years later, Gidget (Monie Ellis) has left her job at the United Nations and is now working as a first grade teacher. Jeff “Moondoggie” Stevens (Michael Burns) returns home from the Air Force and is ready to get married immediately. 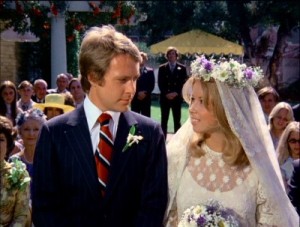 The two go to Gidget’s dad (Macdonald Carey) who is wary of such a quick wedding but relents when he hears Jeff has an engineering job lined up. Former child star and Gidget’s old landlord Louis B. Latimer (Paul Lynde) attends the wedding and brings his movie cameras to capture the moment.

The movie is less about the wedding and more about the newlyweds adjusting to married life, new jobs and communities.

They move to Florida for Jeff’s job at Worldwide Dynamics. Their home is located in a company owned community and furniture is provided by Worldwide Dynamics, which doesn’t sit well with Gidget, because she can’t decorate her first home. Jets also fly over Gidget’s neighborhood. Worldwide Dynamics is separated into three communities based on status within the company and the neighborhoods aren’t supposed to fraternize.

Jeff works hard in his new job, often working late nights and weekends, so he can prove himself at work and get promoted. This upsets Gidget because she never sees him. 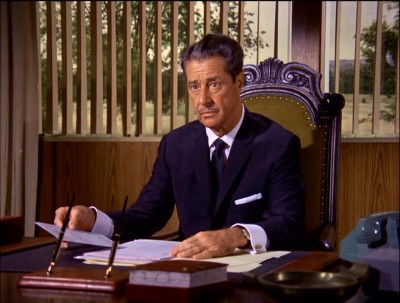 Gidget decides to protest the loud jets and caste system like living situations with city hall, only to realize that Jeff’s strict boss Otis Ramsey (Don Ameche) is on city council and that Worldwide Dynamics runs the city. While Ramsey isn’t pleased with Gidget’s missions, his wife Claire (Joan Bennett) agrees with her. Gidget decides to protest for what’s right even if it means Jeff losing his job. All of this leads to marital spats as they adjust to life together. 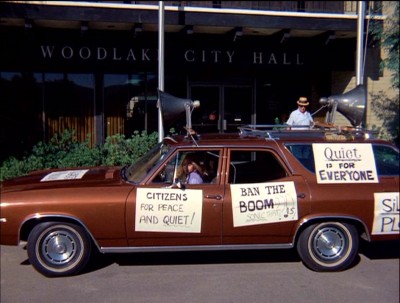 Similarly to “Gidget Grows Up,” “Gidget Gets Married” was another ABC Movie of the Week which aired on TV on Jan. 4, 1972.

“Gidget Gets Married” isn’t quite what I expected. For whatever reason, I expected the show to revolve around planning their wedding and fights leading up to the big day. However, the wedding was within the first 10 minutes of the show, and newlyweds fighting and adjusting to life is a pretty typical plot.

Unlike the last two Gidget feature or TV films—Gidget Goes to Rome and Gidget Grows Up—we do actually see Gidget and Jeff surfing on their honeymoon. They reference their surfing background more than “Rome” or “Grows Up” as well, suggesting to get married on the beach where they met (they don’t) and Gidget gives Jeff surfboard cuff links that say “Gidget and Jeff: Forever in Tandem.”

Actress Mona Freeman with daughter Monie Ellis on the set of “Gidget Gets Married.”

Monie Ellis is fine as Gidget—she’s pretty, short and perky—but I wasn’t a fan of Michael Burns as Jeff/Moondoggie. I think this would have been a stronger movie had Karen Valentine and Paul Peterson been recast or better yet—if Sandra Dee and James Darren had reprised their roles. Even if the plot was bad, Dee and Darren together again would have been the nostalgic touch this movie needed to engage me. Alas that is a pipe dream.

Monie Ellis may not be a name you’re familiar with, because she had few TV or movie roles. However, you do know her mother—actress Mona Freeman.

I felt Macdonald Carey was wasted as Gidget’s dad, because he had even less screen time than Robert Cummings in “Gidget Grows Up” (1969). Joan Bennett was still lovely, but I wish she had a larger role. I actually didn’t recognized Elinor Donahue until she had a closeup, because of her short, 1970s hairstyle.

Macdonald Carey as Gidget’s dad in “Gidget Gets Married.”

Since Paul Lynde’s character of Louis B. Lattimer was the highlight in “Gidget Grows Up,” I was excited to see that he was reprising his role. However, his character was more exaggerated and over the top almost to the point of annoyance. I’m not sure if this was a director or character choice.

Paul Lynde in “Gidget Gets Married”

However, he did have some humorous lines that would please classic film fans such as:
• “I’m picketing the Freddie Bartholomew film festival at MOMA”
• “I’ll cut in some outtakes from Intolerance” (while filming the wedding)

It wouldn’t be an early 1970s film without a romantic montage set to music. This time it was during their honeymoon, but it was set to the worst song called “Good Morning Love.”

I went into “Gidget Gets Married” without expecting much and it met my mediocre expectations. However, it’s a letdown after coming from the joyous romp that is “Gidget Grows Up.”

Read more about the three Gidget feature films and our interview with Kathy Kohner: