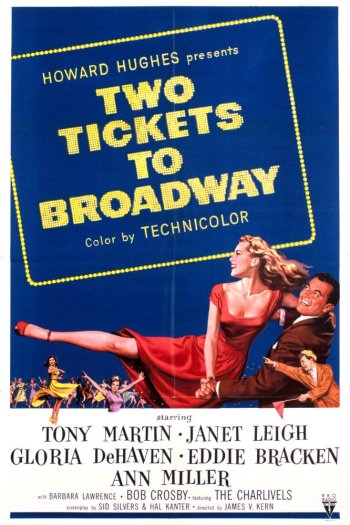 Plot:
Nancy Peterson (Leigh) is given a big send off from her hometown, Pelican Falls, as she leaves to get her start on Broadway. On her bus trip to New York, she meets three down-on-their-luck performers: Hannah Holbrook (DeHaven), Joyce Campbell (Miller) and S.F. Rogers (Lawrence). Their agent (and Hannah’s boyfriend), Lew Conway (Bracken) continuously sets them up with dead-end gigs. Nancy also meets (and falls in love with) another down-on-his-luck performer, Dan Carter (Martin). To save face, Lew Conway lies to Dan, Nancy and the three girls; telling them that they have a huge performance spot on Bob Crosby’s TV show. The crew forms an act and starts rehearsing, not knowing that they may not be performing the act anywhere.

Awards and Nominations:
-John Aalberg was nominated for an Academy Award for Best Sound, Recording. Douglas Shearer won for “The Great Caruso.”

Trivia:
-Busby Berkeley was brought out of retirement to choreograph the film, according to Janet Leigh’s autobiography.
-Eddie Bracken tried to coach Janet Leigh comedic arts such as the “double take” but she didn’t fare too well, Leigh wrote in her autobiography.
-Bing Crosby’s bandleader brother, Bob Crosby, has a cameo in the film and sings a song about his brother.
-The roles of the delicatessen owners were originally offered to Stan Laurel and Oliver Hardy, who had to turn down the parts due to illness.
-Dancers Marge and Gower Champion were originally going to be cast in the film shortly after they were signed to MGM. However, Howard Hughes took too long to get the film off the ground and the Champions had to report to MGM, Leigh wrote in her autobiography.

My review:
The film starts with Janet Leigh leaving her small hometown, all her neighbors are gathered and singing to her in a farewell parade.

At this moment you think “This movie is going to be so fun!” But it seems to start it’s way at the top and work it’s way down from good to “eh.”

There are some good points in the film, such a the scenes just with Janet Leigh, the scenes and performances with Leigh, DeHaven, Miller and Lawrence are enjoyable, especially “The Worry Bird Song.” By far, Bob Crosby’s appearance and performance picking at his brother Bing crosby is the highlight of the entire film. But between Eddie Bracken as comedic con artist agent and the arguing delicatessen waiters, I was annoyed and frustrated.

The musical numbers are decent. Janet Leigh wrote in her autobiography that she wasn’t a dancer, but you can tell she worked hard. Tony Martin was a little awkward on the dancing front. The best songs include Tony Martin’s version of Rodgers and Hart’s “Manhattan” and the “Worry Bird” ensemble performance with Miller, Leigh, DeHaven and Lawrence.

One terrible and bizarre number is “Big Chief Hole-in-the-Ground” featuring Martin, Miller, Leigh, DeHaven and Lawrence. They are all dressed as Native Americans and Tony is the chief wearing braids. Their singing is shouting and it’s a dumb song about how he strikes oil and then all the squaws are dressed in furs and jewels. 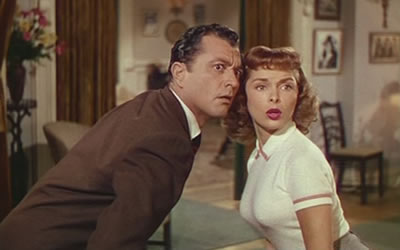 Tony Martin and Janet Leigh in Two Tickets to Broadway

While “Two Tickets to Broadway” isn’t the worst, it could have been a whole lot better. If you cut out the scenes with Eddie Bracken and just left us with some colorful dance numbers from the rest of the cast, maybe it would have been better.