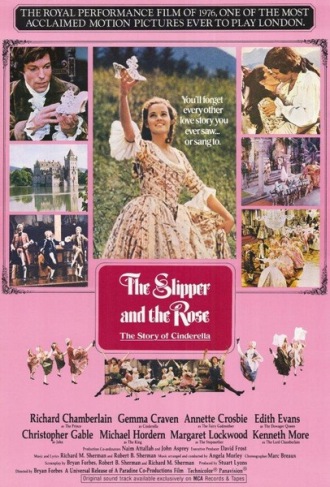 Plot:
Prince Edward (Chamberlain) of the small kingdom of Euphrania wants to marry for love. But his father the King (Hordern) needs to arrange a political marriage with a princess from another kingdom so their small domain is not invaded. Outside the palace walls, Cinderella’s (Craven) father dies and her stepmother (Lockwood) forces her into servitude. The King holds a ball so Prince Edward can find a wife and Cinderella’s fairy godmother (Crosbie) fixes it so Cinderella can go. Prince Edward and Cinderella fall in love, but their romance is complicated because she isn’t of noble blood.

Trivia:
-Music was written by songwriting brothers Richard and Robert Sherman, who scored several Walt Disney films.
-Margaret Lockwood’s last film
-An unknown was wanted for the role of Cinderella and the search for the role was comparable to Scarlett O’Hara. Gemma Craven was one of 150 girls interviewed for the part.
-The film was produced by journalist David Frost

Gemma Craven as Cinderella in The Slipper and the Rose

My review:
There have been many, many versions of the fairy tale “Cinderella.” There’s Walt Disney’s 1950 animated version, MGM’s Glass Slipper (1955), Rodgers and Hammerstein’s TV musicals (1957 with Julie Andrews and 1965 with Leslie Ann Warren) and even Cinderfella (1960) is Jerry Lewis — just to name a few.

This 1976 version is the same story but a little different: Rather than just following Cinderella’s story of being trapped as a servant by her step mother and sisters, but we learn more about the Prince and the kingdom’s issues as well. The Prince wants to marry for love, but the tiny kingdom needs a formal betrothal for political reasons. The kingdom needs a bride that ties them to a larger country who would aid them if they were attacked.

The story is told with 15 songs written by Richard and Robert Sherman spread throughout 2 hours and 7 minutes. And when I heard the Sherman brothers scored the film, I was excited and knew I would be hearing high-quality music.

And while the Sherman brothers are magnificent songwriters (see Mary Poppins, Summer Magic, Jungle Book, etc), the songs in “The Slipper and the Rose” are only okay. There wasn’t one song I walked away from the film humming (and can barely remember any of the tunes now as I type).

Some of the songs seemed pretty lengthy as well, especially “Position and Positioning,” “Protocoligorically Correct,” or “Tell Him Anything (But Not That I Love Him).” The 146-minute film felt very long and maybe it’s because of the sheer number of songs.

Aside from mediocre music and feeling like it dragged a bit, “Slipper and The Rose” has a great cast. Though Gemma Craven was fine as Cinderella, the real highlight came in the rest of the actors. Richard Chamberlain was great and has a wonderful singing voice, and it was really exciting to see Margaret Lockwood in her last film role playing the wicked stepmother. Kenneth More has a small role, as does Edith Evans and it’s wonderful to see both of those. Annette Crosbie also plays an entertaining fairy godmother, who is overworked and underpaid in magic.

Overall, “The Slipper and the Rose” is an entertaining Cinderella story that’s often overlooked. I was just disappointed in the music.

7 thoughts on “Musical Monday: The Slipper and the Rose: The Story of Cinderella (1976)”