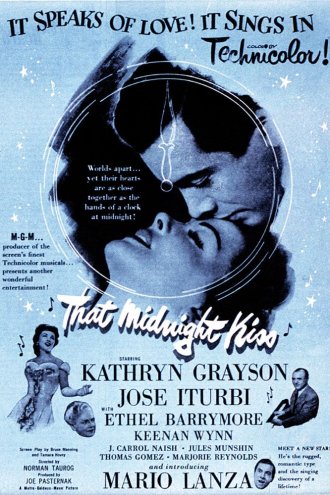 Plot:
Wealthy Abigail Trent Budell (Barrymore) wants pianist José Iturbi (himself) to help launch the opera career of her granddaughter Prudence (Grayson). Iturbi finds her talented and Abigail sponsors an opera company so Prudence can get her start. With a new talent, famous tenor Guido Russino Betelli (Gomez) is hired as her lead. Betelli is demanding and difficult to work with. Abigail meets singing truck driver Johnny Donnetti (Lanza) and encourages Iturbi to also make him a singing star. 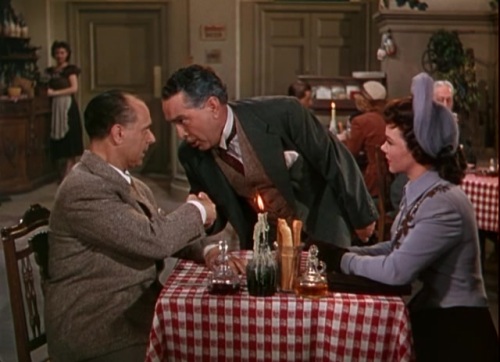 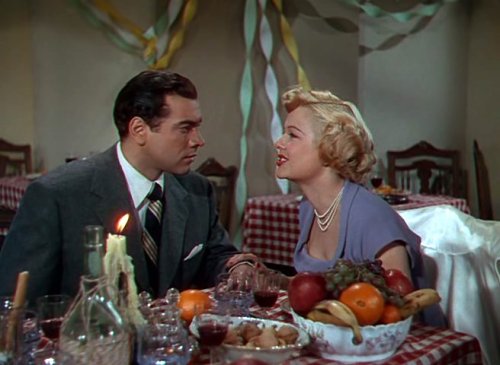 My review:
There are some Mario Lanza films I have watched that were a chore to get through. These include “Toast of New Orleans” (1950) or “Serenade” (1956). I just can’t get behind his characters in those films. But it’s obvious those characters are due to the scripts and not completely Lanza, because That Midnight Kiss is a delight!

I was dreading revisiting this film, confusing it with Toast of New Orleans, but as the credits rolled I knew I was going to have a good time.

“That Midnight Kiss” is fun, colorful film. It is filled with beautiful music, gorgeous Technicolor and lovely costumes by Helen Rose for the actresses.

Kathyrn Grayson is as lovely as ever and Ethel Barrymore is always magnificent. The movie is also filled with an excellent supporting cast from Jose Iturbi, Jules Munshin, Arthur Treacher, Keenan Wynn, J. Carrol Naish to Marjorie Reynolds. I was particularly excited to see Marjorie Reynolds. I had only have seen her in a few early 1940s Paramount films, so it was interesting to see her in a Technicolor MGM musical (she doesn’t sing).

The role of Jose Iturbi in this film is a highlight for me. We later get to see him play piano with his sister, Ampora Iturbi. The disappointing factor is that this was Iturbi’s last film. His connection to Hollywood was damaging his career as a pianist and conductor and he was being criticized by music critics.

Aside from an uncredited role as a chorus member in Winged Victory (1944), this was Mario Lanza’s first film. And in his first film, he was one of the stars. This is a young and fresh Lanza who’s star, unfortunately, faded too quickly. Starting on the top in 1949, he was dismissed by MGM in 1952. He also eventually had alcohol and overeating issues, as well a temper that clashed with casts and crews. Lanza was only in eight films, his last in 1959 — the same year he passed away at age 38.

Gossip columnist Hedda Hopper wrote, “his smile, which was as big as his voice, was matched with the habits of a tiger cub, impossible to housebreak.”

Regardless of his troubles in the future, in his first film, Lanza has a wide smile, a magnificent voice, and a likable prescience. The energy of the character and the lines delivered by Lanza reminded me of Gene Kelly in his early roles. It made me wonder if MGM was trying to achieve just that.

Kathryn Grayson, Jose Iturbi and Ethel Barrymore got top billing for this film. And while they are all wonderful in this film, “That Midnight Kiss” is Mario Lanza’s film. 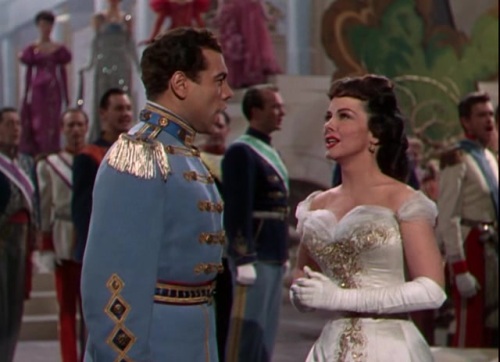