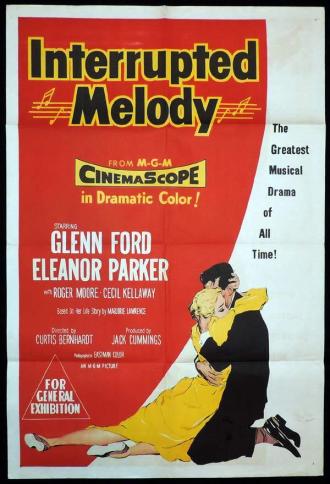 Plot:
Biographical film on Australian opera singer Marjorie Lawrence, whose rising fame comes to a halt when she becamesf ill with polio. Paralyzed from the waist down, Marjorie isn’t sure if she will ever be able to perform or have the will to. 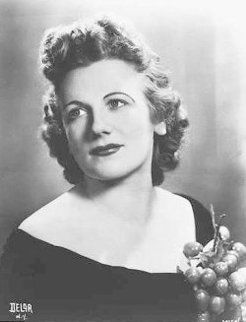 • Based on Marjorie Lawrence’s 1950 autobiography of the same title
• The idea of the film version came about in 1952 with Greer Garson campaigning for the lead. Marjorie Lawrence even personally approached Garson about the film. As Garson began training and researching for the role, MGM executive Dore Schary shelved the project due to cost. Garson eventually left MGM when her contract expired in 1954 and once she did, Schary cast Eleanor Parker, according to A Rose for Mrs. Miniver: The Life of Greer Garson
• Eleanor Parker called this film “just about the best picture I ever made,” according to The Women of Warner Brothers by Daniel Bubbeo
• Kathryn Grayson, Lana Turner and Greer Garson were considered for the role of Marjorie Lawrence. Lawrence thought Kathryn Grayson was “too pretty,” according to NotStarring.com.
• Marjorie Lawrence wanted to dub her own singing but she was starting to lose her range. Opera singer Eileen Farrell dubbed Parker under the condition that it wasn’t publicized because she didn’t want to hurt an upcoming tour Lawrence was going to do. Lawrence later sued MGM because she wasn’t able to do her own singing, according to Eleanor Parker: Woman of a Thousand Faces by Doug McClelland
• It was Eleanor Parker’s idea to hire Glenn Ford for the lead and offered to sacrifice top billing to get him on board, according to Glenn Ford: A Life by Peter Ford.
• Producer Jack Cummings wasn’t going to cast Eleanor Parker, who lived a family oriented life and he didn’t believe she could play a prima donna. She went into Jack Cummings office demanding that he didn’t like her (as an act to get the role). He realized this and was impressed, thus casting Parker as Marjorie Lawrence, according to Eleanor Parker: Woman of a Thousand Faces by Doug McClelland
• Photographed in Eastman Color
• Costumes designed by Helen Rose

My review:
Often called the Woman of a Thousand Faces, Eleanor Parker had to be one of the most versatile leading ladies in Hollywood of the 1940s and 1950s. She could do it all, from sweet young women, comedic roles, a Baroness, a strong young woman who helps her injured Marine husband, women with psychological problems, women in jail, dramatic roles, manipulative wives, or even an opera singer.

A non-singing Parker plays an opera singer in the biographical film “Interrupted Melody,” the story of Australian opera singer Marjorie Lawrence. And as in all of her roles, Parker plays it to the hilt; starting as a prima donna singer to a woman who no longer wants to live due to a life changing illness.

In some biographical films about singers, the film’s subject may dub the leading actor with their own singing. This happened in “With a Song in My Heart,” which was about singer Jane Froman. Lawrence does not do her own singing in this film, though MGM and Lawrence initially planned on this, and she later sued MGM because they didn’t use her voice. 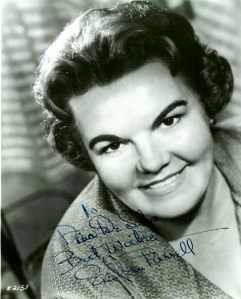 “The studio made two complete recordings with her (Lawrence), but she was getting on in years and her voice wasn’t quite there anymore,” said Eileen Farrell in her autobiography Can’t Help Singing. “She was furious when Jack Cummings, the producer, told her they weren’t using her vocals.”

A friend of Eileen Farrell’s suggested her, a soprano singer who performed with the Metropolitan Opera, and Farrell did the singing. Farrell dubbed Eleanor Parker in the film under the condition that she didn’t receive any publicity. Farrell knew Lawrence had a tour coming up and didn’t want to damage that, according to Eleanor Parker: Woman of a Thousand Faces by Doug McClelland.

“I didn’t worry about trying to sound like Marjorie Lawrence, and just sang everything in the picture in my natural voice,” Farrell said. “The only spot where I really had to do any ‘acting’ was in the scene where she first becomes ill while rehearsing Tristan (and Isolde). I had to show that in my voice.”

While Eleanor Parker didn’t do her own singing, the task of lip synching to the operatic songs was a very difficult task since many of the songs were in another language. Farrell said that Parker stopped by to observe during many of the recordings. At the beginning of the film, I thought some of Parker’s lip synching was a little over-exaggerated, but it either got more natural or I got used to it. Regardless, Parker nailed it with lip synching all of those languages and complicated arias. 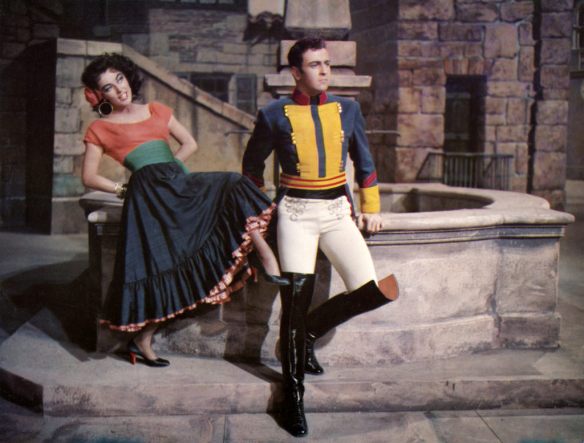 “I had to be letter-perfect, because while I couldn’t actually sing those songs – I couldn’t, of course – the movement of my lips in forming the words had to sync exactly with those of the great soprano’s as they came off the soundtrack,” Eleanor Parker said in an interview published in The Women of Warner Brothers by Daniel Bubbeo. “I learned three operas in three languages in two weeks.”

Farrell noted in her autobiography that Parker did a “perfect job.”

“I actually managed to forget that was really my voice coming out of her,” Farrell wrote.

Marjorie Lawrence wasn’t the only one disappointed that she wasn’t used in the film. Since the time the story rights were purchased in 1952, Greer Garson was campaigning and was even promised the film role. While Garson was filming The Miniver Story (1950), Lawrence mailed her a copy of her autobiography to Garson. Garson was Lawrence’s favorite actress and she was interested in Garson having the lead. The media even announced in 1952 that Greer Garson would play Marjorie Lawrence, according to A Rose for Mrs. Miniver: The Life of Greer Garson.

Greer Garson started research for the role in January 1953, as well as studying how to lip synch opera and working on her Australian accent, according to Tryon’s biography. But the budget of the film rose to $2 million, and MGM was also interested in shooting the film in 3D or Cinemascope, which would further hike up the price. MGM executive Dore Schary had second thoughts about the expensive film and he wasn’t interested in musicals as L.B. Mayer had been. So by Feb. 1953, the Hollywood Reporter announced the project was shelved.

Greer Garson left MGM in 1954 when her contract expired and Dore Schary cast Eleanor Parker in “Interrupted Melody” the following year, much to the disappointment of Garson.

I love Greer Garson and it’s hard to say if the movie would be as good or better if she had been the lead. It’s undeniable that Eleanor Parker does a wonderful job in this film, and she was even nominated for an Academy Award for Best Actress for her role.

“Interrupted Melody” isn’t your standard MGM musical, like “Seven Brides of Seven Brothers” or “Singin’ in the Rain.” This is a dramatic story with staged opera performances sprinkled throughout the story to illustrate Marjorie Lawrence’s rise to fame.

I enjoy the film but I do feel like it takes some time to get to the climax- Ms. Lawrence’s polio diagnosis. The film is an hour and 45 minutes long: the first 45 minutes focuses on her rise to fame, provides about 15 minutes of romance and eventual marriage to her husband Dr. Thomas King, and then at an hour, Lawrence falls ill.

Maybe I shouldn’t quibble at the time frame, but I feel like the inspiration behind this story was Marjorie Lawrence’s polio diagnosis and how she fights through it to gain her career back. It seems to take some time to get to that point, but they do a good job of illustrating just how internationally famous Marjorie Lawrence was.

The film then turns from being about a prima donna to a woman embittered by her crippling illness that has left her wheelchair bound. Parker does an excellent and emotional job of showing the pain and anger someone who is suffering from an illness experiences.

The most interesting part of the film is to see how Lawrence and her husband struggle and then fight for her to get back on the stage. For me, the high spot is when Marjorie Lawrence is inspired to perform again for soldiers during World War II, especially those who have been injured. I did cry happy tears at the end because it’s emotional and triumphant.

The real Marjorie Lawrence being helped on stage

Eleanor Parker was the one who suggested Glenn Ford for the role of her husband and even gave Ford top billing to get him onboard. Glenn Ford later said Parker was “the most untemperamental girl in Hollywood!”

Parker and Ford are a great screen team and both do an excellent job. We also see a young Roger Moore in this film as Marjorie Lawrence’s brother and manager.

Even if you aren’t an opera fan, give “Interrupted Melody” a try. Eleanor Parker does a magnificent job and it’s an inspiring story. I’m fairly positive that Eleanor Parker could play any role that was thrown at her.

Nominated:
Eleanor Parker for Best Actress in a Leading Role
Helen Rose for Best Costume Design for a Color Film