As summer comes to a close, so does my “Gidget” series.

For three summers, I have spent a lot of time with Gidget, the surfing girl midget. Because of my love for the 1959 version and casually watching the films that followed, I decided to really delve into a film that was a catalyst for the beach film phenomenon.

Some people dismiss “Gidget” (1959) as teenage romantic fluff with cute Sandra Dee. Say what you will, but this film—and the book it was adapted from—launched the whole surfing industry. After the film was released in 1959, the Beach Boys started making records, along with the whole beach film franchise such as the Frankie Avalon and Annette Funicello films, to copycat films like “Surf Party” with Bobby Vinton and Jackie DeShannon.

So starting July 2015 through Sept. 2017, I found and watched every Gidget adaptation in the franchise—this included:

*I failed though, because I did miss one. There is a Hanna-Barbera ABC Saturday Superstar Movie animated Gidget cartoon called “Gidget Makes the Wrong Connection” (1972) that I was unable to find anywhere. (If anyone knows where I can find it let me know).

Gidget (Richman) is grown up, married to Moondoggie and running a travel agency. Her niece lives with the couple, and she gets into trouble like Gidget used to. This show is just bad and over the top with its humor. The style is probably similar to other mid to late 1980s television shows but it doesn’t excuse just how terrible it is. The real Gidget, Kathy Kohner, said in the documentary that she was inspired by this show to also become a travel agent.

This made-for-TV movie was the pilot for “The New Gidget” TV show. It’s just as bad, but the humor doesn’t seem quite as over the top. Also, while the show focuses a great deal on Gidget’s teenage niece, she is only a secondary plot in the pilot.

While Kathy Kohner didn’t marry Moondoggie in real life (and her real crush was named Bill), she does in the series! They get married in the first 10 minutes of the film and the rest is about their newlywed life of fighting and adjusting to life together. This movie has an excellent cast including 1940s stars Joan Bennett, Don Ameche and Macdonald Carey. But unfortunately the excellence ends there. These actors also have little screen time and the film is a letdown. It’s not horrible, but perhaps mediocre.

Every time I think, “Maybe it’s not so bad…” and start rewatching “Gidget Goes Hawaiian,” I remember it really is that bad. Coming a couple years after the first film, “Gidget Goes Hawaiian” is simply ridiculous and slaphappy. Deborah Walley as Gidget is annoying, whiny, and is constantly trying to make Moondoggie jealous. There is even an odd dream sequence where she pretends she is a fan dancer. The 1961 New York Times review called described her as “squealing, calliope innocence.” The issue with this film is the casting of “Gidget” and the script. One interesting aspect is Deborah Walley did her own surfing.

Only slightly better than “Gidget Goes Hawaiian” is the third feature film. This is less about surfing and more about Gidget having a grownup experience abroad. She is growing out of her surfing teenage craze and experiences some growing pains. The focus is again on jealousy as Moondoggie ditches Gidget for their pretty Italian tour guide—also in this film he’s suddenly called his real name, Jeff. Shot on location in Rome, the Technicolor scenery is gorgeous, colorful and travelogue-esque. Cindy Carol is a better Gidget than Deborah Walley and less man crazy. Jessie Royce Landis steals the show. 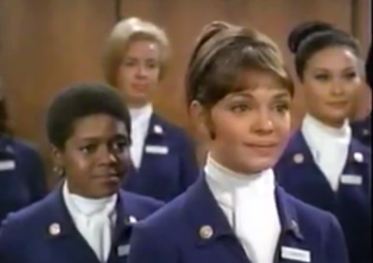 It was difficult to put this one at number three because I love it so much. What place in the world does Gidget have in the turbulent late-1960s? At the United Nations as a tour guide. Rather than sulking after being jilted by Jeff, Gidget decides she wants to make a difference in the world. Robert Cummings is wonderful as Gidget’s father, but the real highlight is Paul Lynde, who is Gidget’s former Hollywood child star landlord. This TV movie is so delightful and made me so happy! 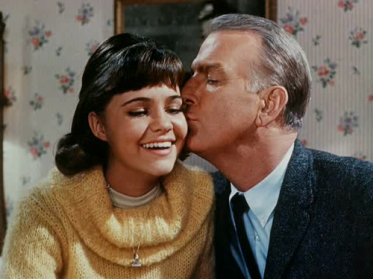 I really wasn’t sure I was going to like the 1960s Gidget TV series. But as soon as I started watching, I was hooked. This show had me laughing out loud! Sally Field is a great Gidget and Don Porter as her father is a real highlight. The only disappointing thing about this series is that it didn’t last longer.

What can I say—the original Gidget film is just perfection. The cast, costuming, gorgeous Technicolor cinematography. It makes me laugh out loud and it’s one of those films that I’m sad to see come to an end. While Sandra Dee’s “Gidget” may have been more demure than Kathy Kohner, she certainly is my pick for the best Gidget.

What did I learn from this Gidget adventure?

I also learned how important Kathy Kohner and the character of Gidget are to women. I feel many people see perky Sandra Dee in her soft, pastel dresses, mooning over Moondoggie and reject the whole thing. But Kohner and Gidget were feminists—a word I define as women doing what they want, while often not conforming to social norms.

“The feminist aspect was a major part of the success of the movie,” said director of the 1959 film, Paul Wendkos. “This concept was just being explored on the cultural scene.”

Surfer and educator Rachel Wegter, even wrote her thesis on Gidget and Kathy Kohner as a feminist figure in American society.

“She is the quintessential girl, but she also breaks into the man’s world of surfing and she doesn’t have to compromise her femininity to do so,” Wegter said in the “Accidental Icon” documentary. “That is what is most remarkable about her story. She could surf with the guys in the day time or go on a date with them at night. I think that’s a powerful message that in this day-in-age we don’t hear a lot of.” 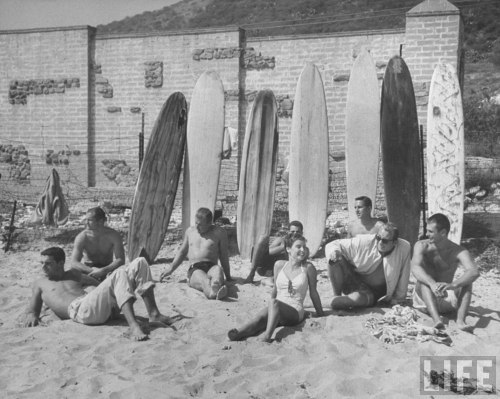 In the 1950s, when many girls weren’t surfing, Kathy Kohner decided that surfing is what she wanted to do — so she participated in a male dominated activity. For the most part, the male surfers at Malibu welcomed her into their surfing group.

And in the film, Gidget feels she doesn’t fit in with the mainstream. She isn’t interested in chasing boys and going on dates. She wants to hang out and have fun, and she finds she fits in best with these carefree, uninhibited guys.

Many female surfers say they were inspired by Kathy Kohner and the Gidget films with their own surfing, and some were also nicknamed “Gidget.”

Kathy Kohner at Malibu in 1957

“I grew up seeing images of Gidget surfing on TV and she was the only woman I saw surfing on TV,” said surfer Izzy Tihanyi in the documentary. “It never occurred to me that girls didn’t surf until I was a teenager and looked around in the line up and saw I was the only one.”

“During Gidget’s time, it wasn’t cool for girls to surf. It was cool for them to sit on the beach and watch and get excited when their dudes caught a wave,” said surfer Kelly Myer in the documentary. “It wasn’t a radical thing that everyone thought, ‘Oh my god look what she’s doing!’ I think it was a sort of organic, natural fun thing that Kathy was doing. In doing it in that way she really set the energy for more to happen.”

The Surf Culture is Born

While I knew the Gidget franchise lasted 30 years—from the publishing of the book to the last TV sitcom—I had no idea the influence it made on our culture. A whole industry was born after the Gidget book and 1959 film. While people were surfing before, this brought about a surfing craze.

“The Gidget book definitely changed the face of the sport,” said Kemp Aaberg, Early Malibu Local in the documentary, Accidental Icon: The Real Gidget Story (2010). “There was a marked change.”

In my 2015 interview with Kathy Kohner, she said she stopped surfing shortly after the book and film came out because the beaches were too crowded. She was nervous because so many people were in the water. It turns out, many of the boys she surfed with also quit—unhappy with the commercialization and overload of people.

“A bunch of us went to see the movie in Hollywood and Tubesteak (the surfer Kahuanna is based on) said ‘This is the beginning of the end,’” said early Malibu surfer, Tom Powell. “Which it was.”

“The feeling oh my god, what’s coming next? The world’s coming to an end. Now the whole world knows,” said Ted Gugelyx, another early Malibu surfer and local.

Many of them also boycotted the surfing contests, because they didn’t see how you could judge surfing, according to Thomas “Dutch” Vandervoort in the documentary

“Surfing wasn’t really commercial. Gidget came out, and a year later, everyone had a surf board in California,” said surfer Lance Carson in the documentary. “Up to 1959, the beaches were not that crowded. I remember by the summer of 1960, this place (Malibu) was packed.”

Gidget has been a favorite film since I was a child, and I never realized its full importance with our culture. Similarly to the end of the film, I’m sad to see this Gidget journey has come to an end. It was a radical ride.