Plot:
Set during World War II, Hattie Maloney, known as Panama Hattie (Sothern), owns a nightclub in Panama where her sailor friends Red, Rags and Rowdy (Skelton, Ragland, Blue) often visit. Hattie is in love with Dick Bulliard (Dailey), who is in the Army and stationed at a nearby base. Hattie is nervous because Dick has been married before and has an 8-year-old daughter Geraldine (Horner) who Hattie will soon meet. Geraldine and Hattie don’t get off on the right foot, as Geraldine laughs at Hattie’s loud clothing. Hattie also has competition when the daughter of the admiral, Leila Tree (Hunt), who has her sights set on Dick. Meanwhile, Red, Rags and Rowdy are always convinced there are spies around and end up uncovering a spy plot.

Trivia:
• Produced by Arthur Freed
• Based on the 1940 Broadway musical with music by Cole Porter and starring Ethel Merman, Betty Hutton, James Dunn and Arthur Treacher. June Allyson, Doris Dowling and Constance Dowling, Betsy Blair, Lucille Bremer and Vera-Ellen were in the play’s chorus.
• Rags Ragland was in the Broadway play and in the film.
• Ann Sothern filmed the song “Make It Another Old-Fashioned, Please” but it was cut from the film. You can hear the song played in the background.
• MGM originally wanted George Murphy and Shirley Temple in the father and daughter roles, according to a July 24, 1940, Associated Press brief. Frank McHugh and Allen Jenkins were also in the projected cast, according to a July 26, 1940, brief.
• The initial film release didn’t do well so the film was rehauled. Roy Del Ruth shot the retakes, and Lena Horne’s numbers were inserted into the film.
• While this is an adaptation of the play, most of the songs were not used and the story line was cut up. Some new songs were created, such as “Good Neighbors,” “Just One of Those Things,” “Did I Get Stinkin’ At the Savoy,” “The Sping” and “The Son of a Gun Who Picks on Uncle Sam.”
• “Did I Get Stinkin’ At the Savoy” was originally Ann Sothern’s song but it went to Virginia O’Brien.
• “The Son of a Gun Who Picks on Uncle Sam” was added to the film after the Pearl Harbor attack to end the film on a patriotic note.

My review:
I really enjoy this musical!

While Ann Sothern is the star of “Panama Hattie,” this really is an ensemble cast and what a cast it is!

The most screen time is given to the Red Skelton, Rags Ragland and Ben Blue comedic trio. Marsha Hunt plays a haughty (but gorgeous) society dame, Virginia O’Brien is Hattie’s friend (and isn’t always frozen-faced like in most of her films), Dan Dailey is the romantic lead before his success at 20th Century Fox, and Lena Horne and the Berry Brothers have some outstanding musical performances. Lena Horne sings my favorite arrangement of “Just One Of Those Things.”

The character of Panama Hattie is similar to Maisie Ravier, who Ann Sothern had already played in six films from 1939 to 1942. But Sothern doesn’t play this as Maisie and makes the character of Hattie her own. She really sells “I’ve Still Got My Health” and to me, that’s the stand out number in this film. 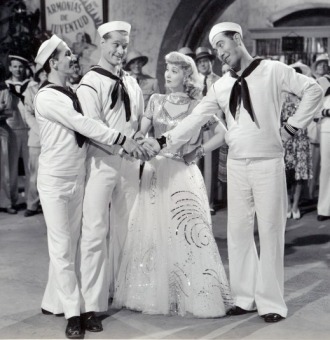 However, my one complaint with this film is that it is so brief at 80 minutes and has such a large cast that mid-way through, Panama Hattie seems to be put in the background and almost forgotten. Ann Sothern sings the last note of “Let’s Be Buddies” at 40 minutes, she has a confrontation 10 minutes later with Marsha Hunt, and then we barely see her again until the finale. Sothern is the best part of the movie and it’s a shame that she wasn’t made the focus. I also hate that she was limited to so few songs. I really wish “Make It Another Old Fashioned, Please” had been included in the final cut.

“For even the blithesome Ann Sothern, who should have been sharp in the title role, is virtually placed in quarantine after briefly singing two songs. “I’ve Still Got My Health” is the first one, which she sings at the opening of the film; but, after one chorus of “Let’s Be Buddies,” she barely has a place in the cast,” wrote New York Times critic Bosley Crowther in his Oct. 2, 1942, review.

Dan Dailey also doesn’t have the opportunity to sing or dance, but at this point in his career, Dailey was mainly cast in minor roles at MGM.

As noted above, Virginia O’Brien is generally known for her frozen-faced singing style, where she stars straight-faced and emotionless at the camera while she sings. However, she drops that comedic persona during the “Fresh as a Daisy” number and smiles and is animated during the song.

“Panama Hattie” was adapted (loosely) from a successful Broadway musical, which catapulted Betty Hutton to stardom and landed her at Paramount. Since the play was so successful, the film had a lot to live up to with critics. And the critics weren’t pleased because film censorship caused many of the play’s racy lines to be omitted.

“Yes, the joy has been taken out of it, along with the ribald gags,” Crowther said in his review.

But despite the poor reviews, this is an entertaining musical. I saw it several years ago and have thought fondly of it ever since. Now revisiting it, I found that I still really enjoyed it.