This week’s musical:
“Babes in Toyland

Plot:
Silas Barnaby (Brandon) is the meanest man in the town of Toyland. He is demanding the mortgage from Mother Peep, the old woman who lives in the shoe (Roberts). Barnaby also wants to marry Bo-Peep (Henry), who refuses him. Along with all of Mother Peep’s children, Stannie Dee (Laurel) and Ollie Dum (Hardy) also live in the shoe. When they can’t pay the mortgage, Bo-Peep agrees to marry Barnaby, but Stannie Dee and Ollie Dum help her trick him into marrying a decoy. To get revenge, Barnaby frames Tom-Tom (Knight), who loves Bo-Peep, for kidnapping one of the Three Little Pigs.

Trivia:
– Walt Disney made a version in 1961 starring Annette Funicello, Tommy Sands, and Ray Bolger
– Also goes by the title “March of the Wooden Soldiers”
– Silas Barnaby was played by Henry Brandon, who was only 22. This was his film debut.
– Ramon Novarro and Donald Novis were both considered for the role of Tom-Tom, which went to Felix Knight, according to Hollywood Songsters: Garland to O’Connor by James Robert Parish and Michael R. Pitts.
– Like with Alice in Wonderland (1933), it was considered to use all the stars on the lot, according to Having a Wonderful Christmas Time Film Guide by Terry Rowan.
– Stan Laurel and Hal Roach disagreed on several creative aspects of “Babes in Toyland” and it began the divide in their working relationship, according to Stan and Ollie: The Roots of Comedy: The Double Life of Laurel and Hardy by Simon Louvish.
– Margaret Seddon was originally set to play the Widow Peep, but she had a conflict due to the delay in filming. She was replaced by Florence Roberts
– Based off of a 1903 operetta by Victor Hubert.

Charlotte Henry and Felix Knight in “Babes in Toyland”

Highlights:
– The costumes of the storybook characters
– A monkey dressed as Mickey Mouse so that it’s a mouse.
– The stop-motion photography of the March of the Wooden Soldiers

My review:
Ever since I was a child, I had grown up with the 1961 Walt Disney version of “Babes in Toyland.” As I detailed in my 2014 review, the Disney version starring Annette Funicello could be a perfect film (it’s beautiful, great cast, wonderful songs) but it falls flat, mainly because of the focus on Ray Bolger as Barnaby and his henchmen.

After years of being aware of the 1934 Laurel and Hardy version, I finally sat down and watched this one for the first time. I’m ashamed to admit that this may be the first ever time that I have watched an entire Stan Laurel and Oliver Hardy film (this includes shorts and features). And I have to say I really enjoyed this.

The 1934 version of “Babes in Toyland” is funny, brief at 70 minutes and quick-moving. The only scene that felt bogged down was at the end when the town was being attacked by Barnaby and Boogeymen. The stop-motion photography for the March of the Wooden soldiers when the soldiers come and save the day was impressive and fun. 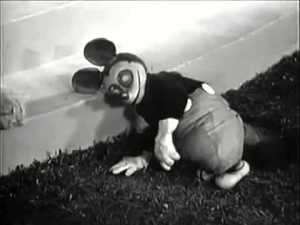 A monkey dressed like a mouse, but it’s Mickey Mouse.

It was also fun to pick out all the nursery rhyme characters fit into the brief movie. Mother Goose introduces the film and then we see Little Miss Muffet, Little Bo-Peep Rock a Bye Baby in a tree, Little Red Riding Hood, Mary Quite Contrary (played by an uncredited Marie Wilson), Jack and Jill, the Cat and the Fiddle, the Three Little Pigs, Old King Cole and Little Boy Blue. There is also a mouse, which is a monkey dressed in a Mickey Mouse costume.

We even see Santa Claus! Early in the film, Santa Claus comes to check on the progress of the toymaker and his workers (Laurel and Hardy) in Toyland. Laurel and Hardy took Santa’s orders for 600 soldiers at one inch high but unfortunately made six-foot high soldiers. At least they came in handy later.

Though we see Santa, and this film is generally shown at Christmas, it is set in July. Stan delivers a Christmas present to Barnaby’s house who says “But it’s July!”

My only real complaint about this movie is that very few of Victor Herbert’s songs from the 1903 operetta are performed, as they are in the 1961 film. The few songs that are performed are the same. However, the song “I Can’t Find the Sum,” which is my favorite song, is only performed by the orchestra in the background and not performed.

The storyline is pretty different than the Walt Disney version. In the 1934 story, The Bo-Peep family is facing financial hard times and can’t play their mortgage on the shoe they live in. Barnaby says he can marry Little Bo-Peep, he will forgive the mortgage. To rebel, once Barnaby is tricked, he sets Boogeymen out on the town.

In the 1961 version, the female lead is Mary Quite Contrary, who will come into a sum of money when she marries. Knowing this, Barnaby kidnaps her finance and steals her sheep so she has to marry him to make ends meet. No Boogeymen are in this adaptation.

However, both 1934 and 1961 versions are quite different than the storyline of the 1903 operetta, which deals with two wards of Barnaby’s who he tries to do away with, and one of whom Mary Quite Contrary is in love with.

The making of “Babes in Toyland” (1934) marked the start of the separation of Hal Roach from Laurel and Hardy. Stan Laurel and Hal Roach argued about the script throughout the film.

Santa at the Toymaker’s

Regardless, it was praised by critics when it was related in December 1934. “Every youngster in New York ought to find a ticket for “Babes in Toyland” in his Christmas stocking,” wrote Andre Sennwald in his Dec. 13, 1934, New York Times review.

I am curious about how the film would have turned out if the film had been more under Roach’s control (perhaps no random Boogeymen?) Regardless, this is a fun film with some lovely costumes and sets.