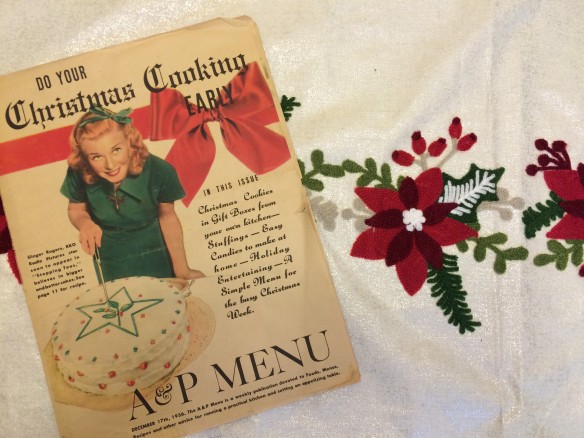 Over the summer, I was surfing eBay for film memorabilia and came across a recipe for Ginger Rogers’s Christmas cake in a small food magazine, A & P Menu, which is “dedicated to food, menus and recipes.” I bought the Dec. 17, 1936, menu so I could attempt to make this cake myself.

In addition to the cake recipe, the rest of this issue of A&P Menu gives cookie recipes and gives suggestions on easy, inexpensive meals for your family leading up to Christmas.

Ginger’s cake is three layers: The top and bottom layer are a white butter cake and the middle layer is a hot water sponge cake. In between the layers, the recipe calls for a jar of red currant jelly. Instead of icing, the recipe called for a mixture of milk and confectioner sugar. Instead, I used a 1988 Wilton icing recipe. The cake is then topped off with candied cherries and citrons. I made a video detailing this cooking adventure: 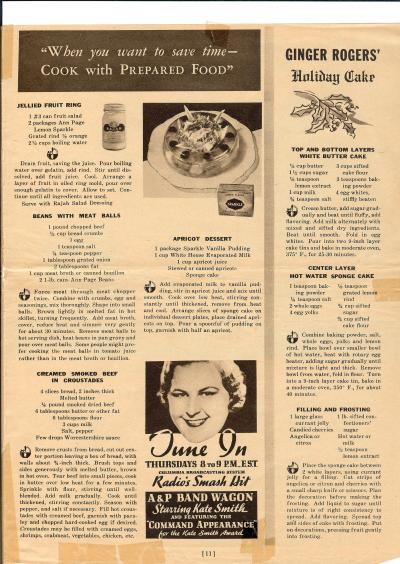 Ginger Rogers’ cake recipe along the right side of the page

The icing recipe I used: 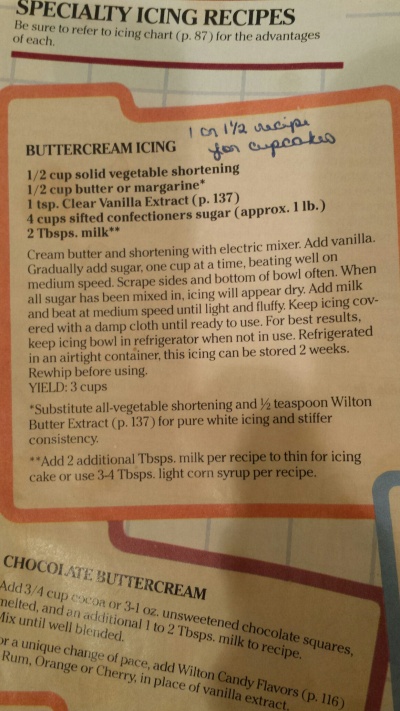 The icing recipe we used from a 1988 Wilton cookbook.

The video sums up making the cake. It was much more time consuming (partially because I was trying to film AND bake) than I’m used to when it comes to baking. Because I was filming at the same time, which made each part of the process longer, this probably took roughly four hours to cook. I’m sure if I hadn’t been filming, it would have taken one to two hours – I’m not a fast baker. My family has always used and enjoyed Pillsbury boxed cake mixes. I also have never made a three-layer cake. The hot water sponge was different. I’m not really sure of the point of mixing eggs and sugar over a bowl of hot water. (Maybe a more experienced baker could advise?)

I went with my own Wilton icing recipe that my family has used for years, because milk and confectioner sugar didn’t sound like it would be a very thick topping, and it also sounded like a runny mess!

If you plan on making this cake, for my oven, the baking times were way too long, so keep a close eye on the cake.

As for the taste, I would say this was merely fine, though it all depends on your tastes. I love fruit and I love cake, but I don’t exactly enjoy them together. I particularly am not a fan of lemon flavored desserts (yes, even lemon bars or lemon meringue pie). The lemon extract used in the layers makes this cake have a pronounced lemon taste. If I ever made this again (which is doubtful), I would substitute vanilla extract. I considered doing this but wanted to stay true to the recipe.

All that said, none of you need to worry that I will turn to food blogging because this was a lot of darn work. If any of you try your hand at this recipe, let me know what you think!