Plot:
Beginning in the 1920s, the Dancing Dolans (Gleason, Smith, O’Connor) is one of the top vaudeville performances. However, Mrs. Dolan wants her son Phil Jr. (O’Connor to Albert) to be educated and be a composer. The Dancing Dolans continue performing, but their acts are no longer well-received and vaudeville is dying. Phil Jr. meets Russian composer Ivan Boultonoff (Kinskey), and Phil composes “The Slaughter on Tenth Avenue” for the Russian Ballet. Phil reconnects with Vera (Zorina), a ballerina he knew from vaudeville, and she lobbies for the head of the ballet company (Hale) to use the music.

1939 notes:
• This was only Eddie Albert’s second feature film; the first was Brother Rat in 1938. While not one of Warner Brother’s top leading men (like Ronald Reagan, Humphrey Bogart, Dennis Morgan or Jack Carson), Albert was a steady comedic star for Warner. Eddie Albert was a lead character in “Brother Rat,” but “On Your Toes” was his first true leading role where the plot and camera mainly followed him.

• This was also the second American feature film for ballet dancer Vera Zorina, who appeared in a total of eight films.

• While Donald O’Connor is only a child in this film, this was his 13th film as a child star.

Other Trivia:
• James Wong Howe was the cinematographer for “On Your Toes.” Sol Polito photographed the “Slaughter on Tenth Avenue” ballet.

• Originally planned as a Fred Astaire vehicle, but Astaire turned down the film.

While “On Your Toes” has three ballet numbers and some vaudeville dances at the beginning, I wouldn’t consider it a musical. There is very little singing and the focus is much more composing music and dance.

Outside of the ballet dancing, the comedy featuring Eddie Albert, James Gleason, and Alan Hale, is not very different from what you would experience in another 1930s or early-1940s Warner Brothers film. 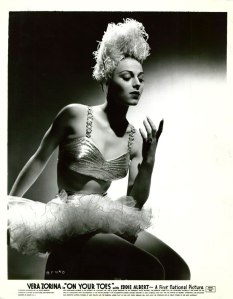 The ballet numbers in it are gorgeously photographed by Howe and Polito. First, Vera Zorina dances beautifully in the Princess Zenobia ballet (photographed by Howe) as the audience is able to see a serious ballet performance. When Eddie Albert enters the Princess Zenobia number, the ballet scene turns away from serious dance to comedy. Albert’s character doesn’t know the dance and makes a ridicule of everyone else, but the papers think the comedy was intentional, giving the dance a good review.

“The Slaughter on Tenth Avenue” ballet is the climax of the film. This wonderful ballet scene is 13 minutes, mixing ballet and some vaudeville tap dancing.

“On Your Toes” is your standard 1930s Warner Brothers comedy. However, it’s unique in the fact that the audience is able to see a serious ballerina who danced for (and was married to) the great George Balanchine, co-founder of the New York City Ballet. Zorina was the prima ballerina in several performances for the Colonel de Basil’s Ballets Russes de Monte Carlo from 1934 to 1936.

With all the musicals I have watched, I can not recollect any other film before Michael Powell’s “The Red Shoes” (1948) that photographs a ballet performance to its full potential. For instance, in early sound films like “Broadway Melody of 1929,” you can see sloppy ballet dancing (I’m thinking specifically of the “Wedding of the Painted Doll” number).

I enjoyed “On Your Toes,” as it is a funny and entertaining film with some of Warner Brothers top comedians. It was a good mix of comedy and art with the ballet.