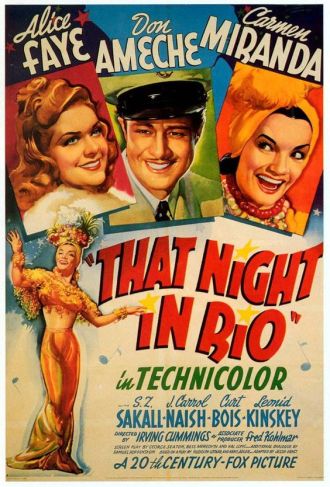 Plot:
Nightclub performer Larry Martin (Ameche) looks similar to the Baron Duarte (Ameche) and has an act where he poses as him. When Baron Duarte falls into financial issues and has to travel to Buenos Aires, his business partners have Larry step in to impersonate the Baron while he’s gone. Larry agrees, only if the Baron’s wife (Faye) isn’t informed that he is a stand-in.

Trivia:
-The story is based on the play “The Red Cat.” This story was adapted on film three times: Folies Bergère de Paris (1935) starring Maurice Chevalier, Merle Oberon and Ann Sothern; “That Night in Rio” and On the Riviera (1951) starring Danny Kaye and Gene Tierney.
-Don Ameche and Alice Faye were in six films together. This was their sixth and last film together.
-Alice Faye had the flu through much of the film, so she had less screentime due to this.
-Costumes by Travis Banton
-Dances choreographed by Hermes Pan
-Gilberto Souto trained Don Ameche in Portuguese and Zacharias Yaconelli trained Carmen Miranda in English.
-Music by Alfred Newman 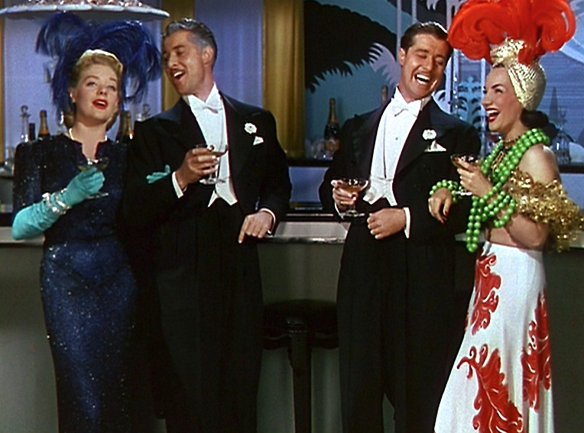 Highlights:
-The Technicolor photography
-Costumes by Travis Banton and jewelry by Joseff of Hollywood

My review:
Each studio during the classic era, had its own flavor and style. Metro-Goldwyn-Mayer’s star-studded, Technicolor musicals are considered some of the best, but 20th Century Fox has a glittering flavor of its own that gives MGM’s musicals a run for their money. (Also noting: Fox seemed to use more Technicolor in the 1940s than many other studios).

So many 20th Century Fox musicals are sumptuous. The color leaps out and are is bright as a fresh paintbox and the costumes are to die for. “That Night in Rio” is no exception. The opening scene even opens with the most colorful actress of them all: Carmen Miranda dressed in silver skirt covered with sequins, a silver top glittering with crystals and her signature fruit hat (though unlike popular belief, her hats were not always topped with fruit).

In addition to Carmen Miranda, the film stars handsome Don Ameche and his endearing smile — even better, we get twice as much of Ameche since he plays a double role. Alice Faye looks beautiful in Technicolor with her blond hair, expressive eyes and singing in that deep voice. 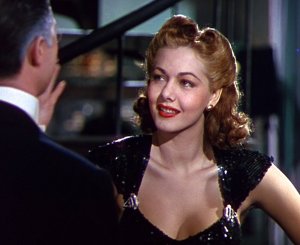 Maria Montez in a small role in “That Night in Rio”

The cast is rounded out with the delightful and humorous character actors S.Z. Sakall, Leonid Kinskey, Curt Bois and J. Carrol Naish. We even catch a glimpse of Maria Montez at the beginning of the film.

The storyline of “That Night in Rio” is fun, though not new since it has been adapted three times on film. However, it’s still light and humorous. But for me, the best part of the film is the music and all the visuals.

I think my favorite part is at the beginning of the film during Don Ameche’s number (as Larry but performing as the Baron) “The Baron is in Conference”/”The Conference.” He is surrounded by beautiful girls in the most gorgeous costumes.

“That Night in Rio” is great fun and provides much needed ear and eye candy during a dreary winter.