Plot:
Larry Hall (Stewart) and Eddie Burgess (Ayres) are a successful ice skating act until Larry and Mary Mckay (Crawford) fall in love and she’s included in the act as a singer. The trio fails and they lose their job. Larry and Mary gets a job as an actress in Hollywood to help support them. She doesn’t realize until later that her contract says that she isn’t allowed to be married without the studio’s consent. Larry can’t handle both their fame and their secret marriage. He leaves saying he will return when he makes a success with ice capades show.

1939 Notes:
• The film is in black and white but as a color sequence at the end.

• Joan Crawford was in only two films released in 1939. The second film was “The Women.”

• Lew Ayres was in six films released in 1939, including one of his Dr. Kildare series films.

• James Stewart was in five films released in 1939, including his much more successful role in “Mr. Smith Goes to Washington.” 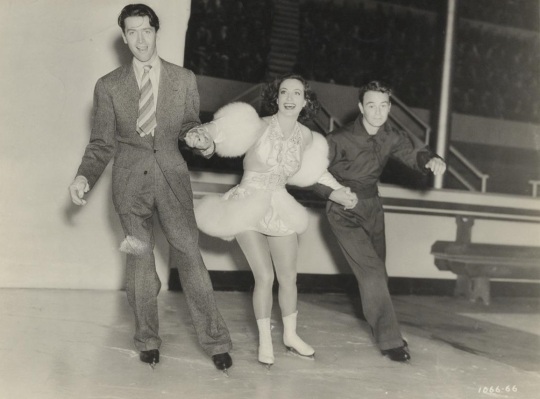 James Stewart, Joan Crawford and Lew Ayres in a publicity photo for “Ice Follies of 1939.”

Other trivia:
• Joan Crawford only sings one song (dubbed) in this film, though she performed in multiple other films prior. Early press announcements said she would be singing multiple songs in the movie.

• Features the International Ice Follies and the co-founding brothers of the touring company, Eddie and Roy Shipstad, as well as ice skaters Oscar Johnson and Bess Ehrhardt. Bess is the only one of the skaters who had a role that wasn’t herself.

• Joan Crawford had two songs cut from the film: “Something’s Gotta Happen Soon” and “Here I Go Following in Love Again.” Crawford only sings a little in the finale.

My review: Searching for the “1939 feature”:
“Ice Follies of 1939” failed at the box office and lost MGM $300,000. The critics panned the film, saying that Crawford, Stewart and Ayres did their best with the material they had.

Joan Crawford later said “Everyone was out of their collective minds when we made Ice Follies. Me, Jimmy Stewart and Lew Ayres as skaters, preposterous. A dancer I am, a skater I am not.”

“Ice Follies of 1939” has all the earmarkings of a delightful Metro-Goldwyn-Mayer produced film but something is lacking. Perhaps some of the usual glitter was left on the cutting room floor.

That said…I do enjoy this film. Do I love it? No, but I have a pleasant viewing experience when I watch it. The plot isn’t new – careers keep a married couple apart – but the leads of Joan Crawford, James Stewart and Lew Ayres make the film for me. 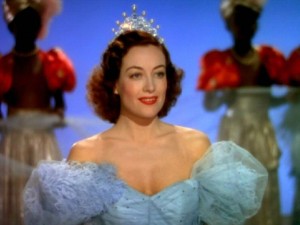 Joan Crawford in the Technicolor finale of “Ice Follies of 1939.”

And it has some fun moments: Joan Crawford gets a movie star makeover, there is a beautiful ice skating montage performed by the International Ice Follies, and the finale is a gorgeous Technicolor finale featuring red-headed Joan Crawford in vibrant bright blue and green costumes. (Though I hate the cat and the fiddle portion of this number).

None of the actors could skate and they don’t in the film. The only time we see any of the actors on ice is at the end when they are leaving a performance at the beginning of the film.

I originally had this slated as a “Musical Monday” piece, but it’s not really a musical. It has a few skating numbers and some singing in the finale, which is designed similarly to a Sonja Henie or Esther Williams film. But “Ice Follies of 1939” is almost like “the musical that wasn’t.” It could have been if the studio had allowed it to be a musical, but once two of Joan Crawford’s song were cut, this became a romantic drama with skating mixed in.

While this film seemed like a failure to it’s three leads, they had success outside of this film. Joan Crawford was the antagonist in “The Women,” James Stewart nominated for an Academy Award for his role in “Mr. Smith Goes to Washington,” and Lew Ayres continued in his successful series as Dr. Kildare.