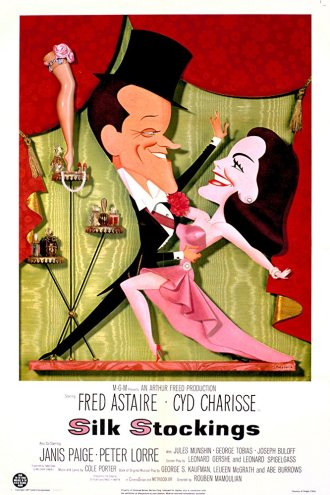 Plot:
Russian composer Peter Illyich Boroff (Sonneveld) is living and working in Paris, France. Film producer Steve Canfield (Astaire) plans to use Boroff as the composer for his upcoming musical film, but this is complicated when three comrades from Russia — Comrades Brankov (Lorre), Bibinski (Munshin) and Ivanov (Buloff) — come to Paris to take Boroff back to Russia. However, Canfield steps in and charms the comrades with the highlights of Paris in the spring. Russia sends Ninotchka Yoschenko (Charisse) to Paris to bring Boroff and the comrades home, and Canfield works to charm her with Paris as well.

Trivia:
– A musical remake of “Ninotchka” (1939)
– This is an adaptation of the 1955 Broadway musical “Silk Stockings,” written by George S. Kaufman, Leueen MacGrath, and Abe Burrows with music and lyrics by Cole Porter. The Broadway musical was based on “Ninotchka.”
– Cole Porter wrote the song “Ritz Rock and Roll” specifically for the film, according to the book Dance’s Duet with the Camera: Motion Pictures
– Choreographed by Eugene Loring and Hermes Pan.
– Produced by Arthur Freed
– Gregory Gaye and George Tobias were both in the original “Ninotchka” film
– Cyd Charisse dubbed by Carol Richards 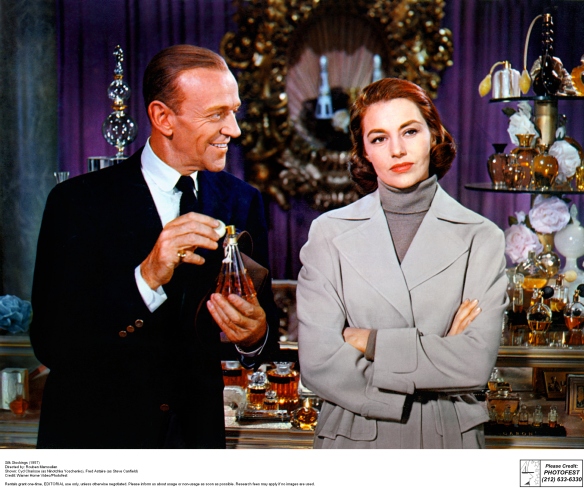 And Ernst Lubitsch’s “Ninotchka” (1939) fell into the mix of being recreated as a Technicolor, Arthur Freed musical. In the 1939 film, the issue that causes Ninotchka to arrive deals with selling the jewels of a grand duchess. In this musical film, the plot follows a composer, who is going to score a film, and being sent back to his home of Russia.

This musical version didn’t originate on screen. Lubitsch’s story was first adapted in 1955 as a stage musical with music by Cole Porter. Many, but not all, of the songs are used in the film. Cole Porter is one of the greatest American songwriters that every lived, but this music isn’t his best. For example, I’m not a fan of the songs “Too Bad (We Can’t Go Back to Moscow)”, “Satin and Silk”, “Josephine” and “Siberia.” (But Peter Lorre being in a musical number for “Too Bad” and “Too Bad” is great). However, the song “Stereophonic Sound” knocks it out of the park. I almost want to give it a standing ovation after watching the number. To me, that number (and Janis Paige) is the highlight.

The dancing in the film is also gorgeous, particularly the duets with Charisse and Astaire.

Since the movie deals with Hollywood, there are some Hollywood jokes. For example, Janis Paige’s character is Peggy Dayton is a former “swimming star,” which is a joke on Esther Williams.

I do think this version of the “Ninotchka” story is interesting, because of the United States relations with Russia during both times. In 1939, the USSR and the U.S. were allies. But by 1957, the two were enemies and the Cold War was in full force.

But one thing I don’t like about the film, or other remakes/musical remakes, is when scenes and dialogue are pulled and delivered straight from the original. For example, some lines from the original Ninotchka are delivered and the scene of blindfolded Ninotchka waiting for the “firing squad” and falling down when she hears a champagne cork pop is a straight from the 1939 version. That generally bugs me, because I feel like a remake should deliver as much new content as possible and not a rehash.

When I first saw this musical in high school, I remember feeling very disappointed. Rewatching it now, I enjoyed it more. It is extremely colorful, and while it has a few clunkers of songs, it is a fairly fun musical. It just isn’t one of Arthur Freed’s best.