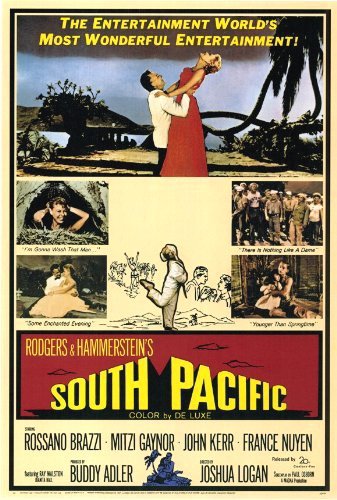 Plot:
Set during World War II, the Navy is stationed on an island in the South Pacific. Nellie Forbush (Gaynor) is a Navy nurse who falls in love with Emile De Becque (Brazzi), a French civilian who lives on the island. Marine Lt. Joe Cable (Kerr) is sent to the island on a secret mission and the military wants De Becque’s help because he is familiar with the islands. De Becque is hesitant to help because of his love for Nellie, but her prejudices complicate the relationship when she realizes Emile has two Polynesian children. Lt. Cable has to come to terms with his prejudice Philadelphia upbringing when he falls in love with a Polynesian girl, Liat (Nuyen).

Trivia:
-Adapted from the 1949 Broadway play of the same title, starring Mary Martin and Enzio Pinza. The Broadway play was based off James A. Michener’s short-story collection, Tales of the South Pacific.
-Director Joshua Logan said he hated the color filter changes in the film, according to his book, “Movie Stars, Real People and Me.”
-The song “My Girl Back Home” was cut from the Broadway production but given another chance in the film adaptation, according to the book Richard Rodgers by Geoffrey Block
-Other than adding “My Girl Back Home,” no original Broadway songs were cut from the film, according to Block’s book.
-Filmed on location in Kauai, Hawaii
-Juanita Hall reprised her role of Bloody Mary, which she originated on stage, but she was dubbed in the film by Muriel Smith, who played Bloody Mary in the London stage version.
-Rossano Brazzi was dubbed by Giorgio Tozzi
-John Kerr was dubbed by Bill Lee

Highlights:
-The music written by Rodgers and Hammerstein

Rossano Brazzi (dubbed by Giorgio Tozzi) singing “Some Enchanted Evening” to Mitzi Gaynor with one of the many filters used in the movie.

My review:
In eighth grade, at age 14, I became obsessed with “West Side Story” (1961). And not long after that, came my obsession with “South Pacific” (1958). I borrowed the VHS tape from my grandmother and was hooked. I remember even buying a few island themed accessories like flip flops, a bag and wallet because they reminded me of “South Pacific.” I also had a huge crush on John Kerr, which manifested for a few years.

And while I’m no longer obsessed with the film, I do still like it … but have almost a bittersweet relationship with the film. First of all, there are certain films that are two and a half hours, but you never realize it because they move quickly. “West Side Story” and “Since You Went Away” come to mind. I never realize that they are over two hours because the story moves at a swift pace.

But at two hours and 37 minutes, “South Pacific” feels long. Throughout the film, we’re introduced to the characters and evaluate their romances and prejudices. And then you realize “oh we still have at least 40 minutes left of this film because there was a secret war mission I forgot all about!”

However, I do like the movie. It’s said that this is one of the most faithful Broadway to film adaptations, according to Richard Rodgers by Geoffrey Block 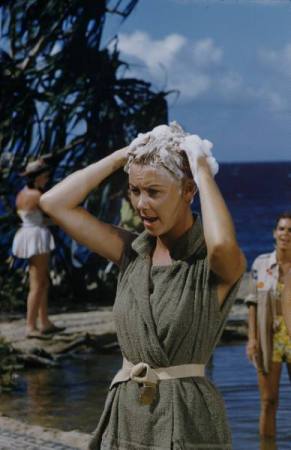 Gaynor performing “I’m Going to Wash that Man Right Out of My Hair.”

Mitzi Gaynor was the perfect choice for Nellie Forbush, a role that helped revitalize her career after 20th Century Fox dropped her contract. Casting was an issue for the film. Mary Martin, who originated the role of Nellie, was upset that her role was going to Mitzi Gaynor and was said to never watch the film, according to Some Enchanted Evenings: The Glittering Life and Times of Mary Martin by David Kaufman. Before Gaynor was cast, Joshua Logan wanted Elizabeth Taylor or Doris Day. Day wanted the role, but her husband and agent kept rising her salary fees and Day was afraid of flying, according to Kaufman’s book. Elizabeth Taylor would have been terrible, but I think Day would have done well. While many people were upset that Mary Martin wasn’t cast, I think Gaynor does a fabulous job. She’s energetic and does a great job as a naive and confused young woman from Little Rock, Ark.

Enzio Pinza, who originated the role of Emile on Broadway, would have been cast in the film, but he died in 1957. Rossano Brazzi looks vaguely like Pinza, so his casting makes sense, though he had to be dubbed. However, Giorgio Tozzi’s voice matches well with Brazzi’s singing voice. 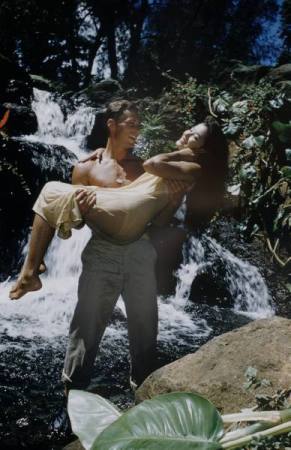 And then there is Lt. Joe Cable played by John Kerr. As the young Marine, Kerr is a great fit and is very handsome. Kerr too had to be dubbed. Bill Lee performed Kerr’s songs. Lee sang in several Disney films and dubbed Christopher Plummer in “Sound of Music.” I love John Kerr in the role, I only wish Lee’s voice matched him a little better. I tried to think of other young men of the late-1950s who could sing and could play the young lieutenant from Philadelphia. After much brainstorming (and cringing at thoughts of Vic Damone), I think Ricky Nelson could have fit the role of a young, innocent and all-American from Philadelphia.

Juanita Hall is another highlight of the film, and interesting since she originated the role of Bloody Mary on the stage. Hammerstein and Rodgers saw Hall in a 1948 revue and automatically knew she would be their Bloody Mary in the Broadway show, according to Africana: The Encyclopedia of the African and African-American Experience by Anthony Appiah and Henry Louis Gates. I am disappointed that Hall was dubbed in the film and would have loved to hear her own voice, as she performed the songs on the stage. Mary Martin said Hall worked out the “Happy Talk” hand motions herself and also used the song as her “positive outlook” mantra.

The best music is the best part about “South Pacific.” From the sweeping “Bali Ha’i” to the hopeful “I’m in Love with a Wonderful Guy” and “Cockeyed Optimist,” the songs are just gorgeous. “You’ve Got to Be Carefully Taught” is also a powerful song, discussing how prejudiced beliefs have to be taught and learned. However, for me, “Happy Talk” is the only low point in the music. I actually fast-forwarded through it while revisiting the film for this review.

And while the music is my favorite part, let’s discuss what I hate: The color filters. And I’m not alone here. Richard Rodgers hated the film, partially citing the colored filters as a reason, and director Joshua Logan was very unhappy with the color. It’s so disappointing and takes you out of the movie.

Filmed in lush, beautiful Hawaii, a yellow, blue or red filter appears during a song or scene distorting the whole feel of the moment. For example, we finally arrive in Bali Ha’i, after hearing about this mystical island the whole film, and it’s all in red. The idea came from a suggestion by David Zeitlin in a memo to Logan, saying that he and colleagues wanted to give a surreal effect to songs and use the color to highlight specific parts of different songs, according to Block’s book. Cinematographer Leon Shamroy told Logan it would be subtle, but Logan felt the color was too blatant. I feel that the colored filters really takes the viewer out of the film and distorts the image too much.

The story of “South Pacific” is interesting because it’s more than just a musical romance, but it looks at prejudices as well detailing the horrors of war.

While “South Pacific” has it’s problems, it does hold a special place for me since it was an early favorite musical. It was also the first film I saw at my first Turner Classic Movies Classic Film Festival in 2013, and Mitzi Gaynor and France Nuyen were interviewed before the film. Gaynor was hilarious and demanded for TCM host Ben Mankiewicz to bring out his newborn baby that was at the festival. What a memory that was! 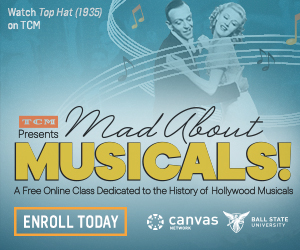