Plot:
Polly Bradford (Powell) goes to boarding school while her cruise ship captain father Captain Jeremy Bradford (Brent) is at sea. After unsuccessfully begging to go along, Polly runs away from school and stows away from school to be with her dad and also to meet opera singer Olaf Eriksen (Melchior).

Trivia:
– George Brent starred in two films titled “Luxury Liner.” One in 1933 and one in 1948. The two films are unrelated.
– Jane Powell had a teenage crush on George Brent in this film. According to her autobiography, she and George Brent reconnected years later while she was in a play. George Brent courted Jane Powell and she enjoyed his company, but when he proposed Jane Powell turned him down because she had already been married three times and didn’t want to marry again. When Powell married her fourth husband, James Fitzgerald in 1965, Brent was angry and wouldn’t speak to Jane Powell.

Highlights:
– The Technicolor
– The musical performances

My review:
Some movies evoke memories.

For me, “Luxury Liner” is one of those movies. It was early in my exploration of musical films, April of 2004 to be exact. I was a freshman in high school and on spring break and my dad was painting the whole house. I remember lying in our house, which smelled of paint and being enthralled with how fun “Luxury Liner” is.

There aren’t any Jane Powell MGM musicals I dislike (though I like some more than others), but “Luxury Liner” is up there in my favorites. Revisiting it and remembering that first time viewing, I thought it was just as fun, cheerful and humorous as I did the first time.

Jane Powell’s character is a teen in boarding school who wants to become a singer. She is a true overly dramatic teenager, and the score helps emphasize that. Every time she speaks to her father, played by George Brent, in an exaggerated sad manner, the music turns to the radio serials-like violin music.

Jane Powell is sweet, bright and delightful in this movie. She practically is the personification of sunshine, and I love it. Her character is funny, has adorable clothes and she also sings some beautiful songs.

George Brent plays Jane Powell’s father, and though he doesn’t sing in this musical, he brings a great fatherly touch and humor. He gives the same tired look most dads would give to their teenage daughters, but also dotes on her. During the 1930s and 1940s, Brent so often as a romantic leading man, that it’s fun to see him as a single dad. 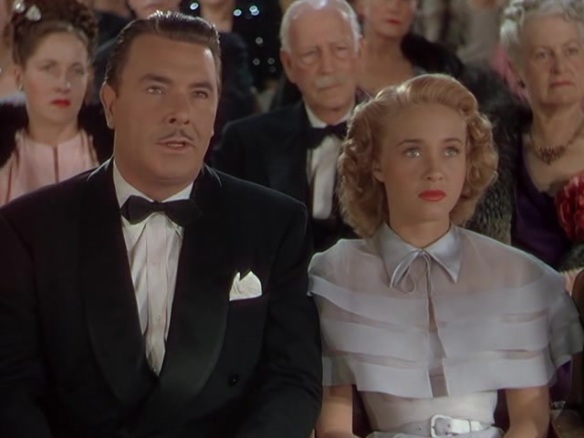 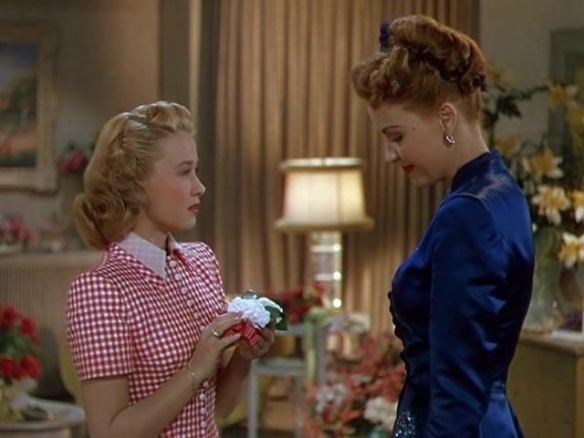 Lovely Frances Gifford is also in the film as a woman taking a cruise to escape her troubles. Unfortunately, after modest success in films at MGM, “Luxury Liner” was one of Gifford’s last films. In 1948, Gifford was in a serious car accident and had serious head injuries. She recovered physically but the injury affected her mentally for the rest of her life. Her career ended in the mid-1950s. While she wasn’t a big star, Gifford is someone I enjoy seeing in films, so it’s bittersweet to see her in this film knowing her career will soon change.

“Luxury Liner” also benefits from the popular performers that Louis B. Mayer signed on to MGM to bring the studio class and culture. In this film we have Lauritz Melchoir, Xavier Cugat and his band, and the Pied Pipers.

Cugat and the Pied Pipers were more of the “popular” music nature, but Melchoir was the class Mayer wanted to bring to the studio.

Lauritz Melchior was a Wagnerian tenor, making his debut in the 1920s. He performed at the Royal Opera House at Covent Garden in London, with the Metropolitan Opera in New York City, with the Buenos Aires Opera, San Francisco Opera, and Chicago Opera. Melchior doesn’t play himself in the film, but another famous opera singer who Jane Powell idolizes. He takes her under his wing encourages her career.

In some films, Jane Powell has a “boyfriend,” like Scotty Becket or Roddy McDowall. In this film, she has a vague crush on a shipworker played by Thomas E. Breen, who was Production Code Administration head Joseph Breen’s youngest son. Breen may be the only odd part about this film, because his character is pointless. There really isn’t any romance, he just followers her around to make sure she doesn’t get into trouble. His role in “Luxury Liner” was probably Breen’s largest in the seven films he made.

Aside from the performers, this shipboard film is beautiful to look at in Technicolor and has beautiful costumes by Helen Rose. The movie mainly takes place on the boat as it sails to it’s destination, adding something unique and fun to the premise.

It’s hard not to gush about “Luxury Liner.” If you are ever having a bad day, hop aboard and take a cruise with this musical.