Plot: Albert Pomeroy (Conway) is being tried for the murder of Edward Webster and the news is suspicious that Webster’s widow Mrs. Muriel Webster (Bond) because she insists that Pomeroy is guilty. However, Pomeroy is found not guilty, but reporter Maggie Shane (Hayes) plays a joke on nuisance reporter Smiley Dugan (Lane) and says Pomeroy was found guilty. Smiley calls the story into Steve Lonegan (Taylor), saying Pomeroy is guilty and broadcasts it on national radio news. Steve’s broadcast company is sued for libel.

1939 Notes:
• Linda Hayes started in Hollywood in 1939. This was one of four films she made released in 1939
• Director Leslie Goodwins worked with Linda Hayes in two films in 1939: “Sued for Libel” and “The Girl from Mexico.” 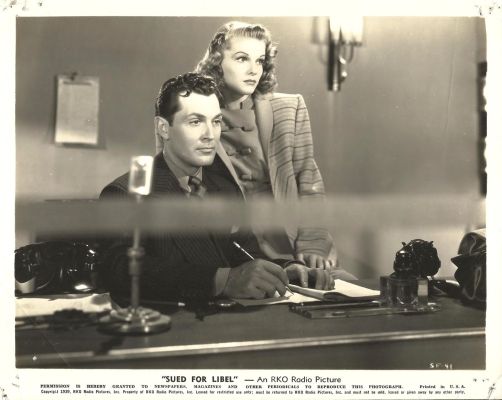 Kent Taylor and Linda Hayes in “Sued for Libel.”

My review: Searching for the “1939 feature”:
“Sued for Libel” is your typical RKO B-movie. There isn’t anything special about this movie, but it sure is fun.

Running at a little over an hour, this movie starts out as a run-of-the-mill reporter and crime comedy but transforms into an exciting mystery! I was surprised that the film shocked me with an unexpected twist.

As far as 1939 goes, there isn’t anything that’s terribly notable. This same year was Linda Hayes’s first year in Hollywood, but she never reached stardom.

While this movie isn’t important in the grand scheme of 1939, it is exciting and fun to watch.