This week’s musical:
How to Succeed in Business Without Really Trying (1967) – Musical #591

Plot:
J. Pierrepont Finch (Morse) is a window washer who buys a book called “How to Succeed in Business,” which tells you how to climb the ladder of success. Finch follows the book by pretending he is hard at work and outsmarting other corporate leaders to work his way to the top. 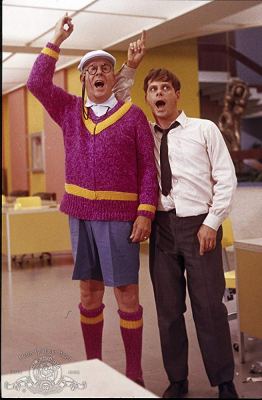 Rudy Vallee and Robert Morse reprising their roles from the Broadway play.

-Robert Morse and Rudy Vallee reprised their roles from the original 1961 Broadway play. The Broadway play was based on the 1952 book “How to Succeed in Business Without Really Trying: The Dastard’s Guide to Fame and Fortune” by Shepherd Mead.

-Michele Lee’s character Rosemary had more songs in the Broadway play which were cut from the film, including “Happy To Keep His Dinner Warm” and “Paris Original.”

-The number “Coffee Break” was filmed but cut from the final version of the film.

-David Swift had a cameo as an elevator operator.

Highlights:
-The Technicolor
-Tucker Smith in a small role as a dancer during “A Secretary is Not a Toy.”

My review:
As I watched this movie, I thought of how different musicals of the late 1960s were from the musicals from the 1930s through the 1950s. By the time “How to Succeed in Business Without Really Trying” was released in 1967, musicals as a mainstream genre were on their way out.

Like most 1960s musicals, “How to Succeed in Business Without Really Trying” is an adaptation of a Broadway play and has a theatrical feel. The dance numbers feel very Broadway-like, in comparison to earlier musical dance numbers like “The Barn Raising Dance” in “Seven Brides for Seven Brothers.”

This movie is as much a comedy as it is a musical. “How to Succeed…” is quite funny as a satire on corporate business and commentary on hypocrisy, nepotism, and sexism. Robert Morse’s character does virtually no work throughout the movie but just finagles his way from the mailroom to the top of the company through various dishonest measures. This includes name dropping for a job, setting up a department head with a sexy secretary, and pretending to work all weekend to impress higher-ups.

And the comedy is funny, the songs performed were not very memorable to me. The dance numbers that went along with some of them were more impressive. For example, I couldn’t hum the tune of “A Secretary is Not a Toy” (even though I watched the movie two days ago), but I can clearly remember the dance numbers.

Visually, this film is candy-coated colorful. I particularly enjoyed the beginning sequence of all the female workers changing into more comfortable shoes, doing their hair, painting their fingernails and putting on makeup.

I really enjoyed Rudy Vallee in his role of the company president J.B. Biggley, who knits to de-stress and is faithful to his alma mater. Robert Morse also is perfect for his role, even though he isn’t one of my favorite actors.

As a “West Side Story” fan, I was happy to see two Jets in “How to Succeed…”. Anthony ‘Scooter’ Teague plays the boss’s nephew who is the antagonist of the story. We also see Tucker Smith, who played Ice in “West Side Story,” as one of the dancers in “A Secretary Isn’t a Toy.”

Tucker Smith (second left from center) in the number “A Secretary is Not a Toy.” 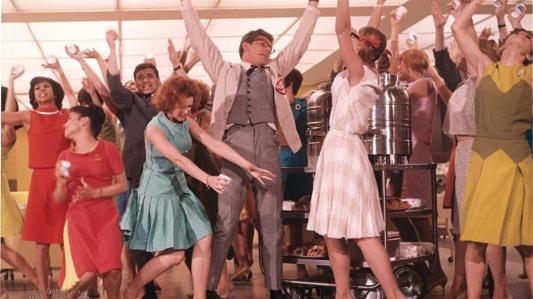 I felt relatively content while watching this movie, but it felt long, and it was only two hours and one minute. However, the satirical look at the corporate world is humorous and most likely still relevant.

In the grand scheme of musical film history, I wouldn’t say “How to Succeed…” was very important. If anything, it is a good example of the films that lead to the musical decline in Hollywood: big, expensive films that tried to emulate the success of “West Side Story” and “The Sound of Music” and failed.

1 thought on “Musical Monday: How to Succeed in Business Without Really Trying (1967)”