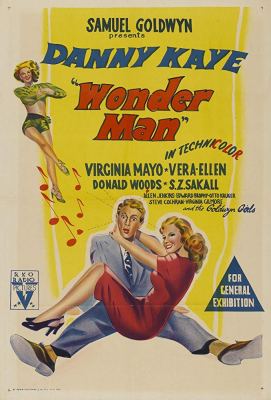 Danny Kaye in a dual role as twin brothers: One alive, one a ghost.

My review:
Coming off of his success in “Up in Arms” (1944), Danny Kaye stars in “Wonder Man” which is a film catering to his talents.

Kaye plays a dual role as twins: A flamboyant nightclub performer who is murdered and a bookish, genius. The different roles allowed Kaye to show his range, from sweet and sensitive to acting nearly crazed as a comic and singing tongue-twisting songs. Kaye may be a little exhausting at times, but I enjoy him in this role.

Outside of Kaye, “Wonder Man” has a great supporting cast, who unfortunately don’t get enough screentime. Vera-Ellen makes her film debut in “Wonder Man,” and while she isn’t on the screen very long, she performs two impressive dance numbers. Virginia Mayo had been in Hollywood a little longer than her co-stars but was still early in her Hollywood career. While she performed in musicals in the late-1940s and early-1950s, Mayo did not sing or dance in “Wonder Man.” Both Mayo and Vera-Ellen look gorgeous in the vibrant Technicolor of this film and Travis Banton costumes. 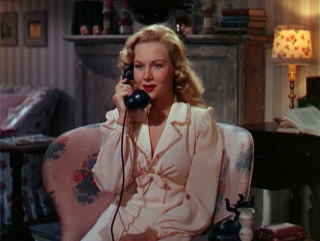 Donald Woods also has a small role as the nightclub owner, and I always love to see him in a film. Also early in their career is Steve Cochran who has a smaller supporting role as our antagonist, the gangster Kaye could send to jail.

All the stars appear to be made for Technicolor, and this whole film is just gorgeous.

While some of the special effects probably seem like nothing for audiences of today, they are impressive, especially for a 1945 film. John P. Fulton and Arthur Johns won an Academy Award for Special Effects for making Danny Kaye’s ghost character walk through doors, not be able to grab a glass or have water shoot right through his head.

While some of Kaye’s gags can take a while, it is interesting to see how his persona was set up for the rest of his career. “Wonder Man” is an entertaining and fun film which helped catapult the career of several actors.