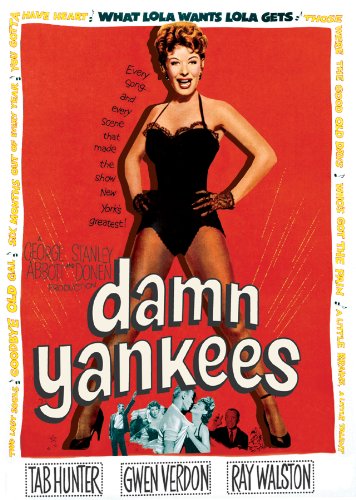 Plot:
Joe Boyd (Shafer) is a fan of the Washington Senators baseball team and says he would sell his soul to the Devil if they could just succeed. And then Applegate (Walston) appears, who makes a deal with Joe to save the Washington Senators and win the pennant. Applegate makes Joe young Joe Hardy (Hunter) who becomes a star baseball player, though no one knows where he came from. However, Joe signed a short-term contract with the Devil, who tries to convince him not to go back home.

Trivia:
– Film adaptation of the 1955 Broadway musical, “Damn Yankees” which starred Stephen Douglass, Ray Walston and Gwen Verdon. Walston and Verdon reprised their roles in the film, as well as Rae Allen as the reporter and Shannon Bolin and Robert Shafer as Mr. And Mrs. Boyd.
– A modern, musical take on the story of “Faust.”
– Though Tab Hunter had recorded records and had a song that went to No. 1 on the charts, this was his first musical film.
– Gwen Verdon’s first credited film role as a character and not just a dance specialty.
– Bob Fosse choreographed the dances and appears in the film
– In England, the title was changed to “What Lola Wants” to eliminate the word “damn” from the poster.
-There were rumors that Mitzi Gaynor or Marilyn Monroe would replace Gwen Verdon, according to Tab Hunter’s autobiography “Tab Hunter: Confidential.”
-Cary Grant campaigned to play the Devil in the film, according to “Tab Hunter: Confidential.”
– Director George Abbott wanted Don Murry instead of Tab Hunter. In a memo sent to Jack Warner, Abbott said Tab Hunter was “too gay” to be believable as the All-American baseball hero, but Warner backed Hunter and wanted him in the role, according to Hunter’s autobiography. 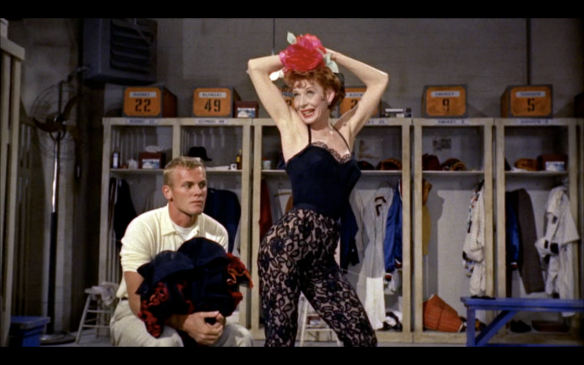 Highlights:
– The divided screen with wives singing in “Six Months Out of Every Year.”

My review:
By the late-1950s, most movie musicals were adaptations of Broadway shows, which is what “Damn Yankees” is. “Damn Yankees” is unique, however, because unlike most Broadway-to-film musicals, much of the cast was transposed on screen. Running 1,019 performances from 1956 to 1957, the film was put on hold until the Broadway show ended so the performers could come to Hollywood.

Ray Walston, Gwen Verdon, Shannon Bolin, Robert Shafer, and Rae Allen are just some of the cast members that reprised their roles for the film. This is unusual because often times, most of the Broadway cast isn’t in the film version (if any are at all). Everyone came over except the lead, Stephen Douglass, who was replaced by Hollywood actor, Tab Hunter, making Hunter the odd man out.

It was Hunter’s first musical – though he had made records – and he was already nervous about that. Then he read that Gwen Verdon was disappointed that Hunter would be in the film, which made him feel bad before even starting, he wrote in his autobiography “Tab Hunter: Confidential.”

Hunter wrote that making “Damned Yankees” was “the best of shoots, the worst of shoots.” He eventually got along with his cast (despite early tension), but the issue was with Broadway writer and director George Abbott who left no room for Hunter’s own interpretations of the role and would make him reshoot until Hunter performed the scene exactly was Stephen Douglass had performed on Broadway. Stanley Donen was then brought on to assist, Hunter didn’t know if this had to do with helping move the film along, according to his autobiography.

While Abbott was not a fan of Hunter’s (and said in a memo to Jack Warner that he was “too gay” for the role), Hunter enjoyed working with Stanley Donen and Bob Fosse, who had a wider perspective for making a film, and also worked with the actors and their own abilities.

Hunter wrote in his book, that initially Marilyn Monroe or Mitzi Gaynor were considered for Gwen Verdon’s role of Lola. (I personally think Gaynor would have been fabulous in this role.) Verdon wasn’t well-known in films or a “traditional Hollywood beauty.” It wouldn’t have been unusual for Verdon to be replaced by a Hollywood actress, but Hunter said Lola and the musical numbers were all Gwen. Gwen Verdon was a great talent and is a great dancer, but I’ll admit I grew a little weary of some of the lengthy dance numbers. I also thought her accent when she first meets Joe is annoying.

Until renting “Damn Yankees” on DVD Netflix, I hadn’t seen it in years. However, it’s funny how after at least 10 years, I realized there were songs I think of or get in my head, especially “Goodbye Old Girl” and “Heart.”

“Damn Yankees” is a fun film and has lots of great dance numbers. I was, however, sad that Tab Hunter didn’t get a chance to sing more. Of everyone in the film, Ray Walston steals the show as the Devil. It does make me sad to think that Tab Hunter had difficulty with cast and crew in this film, especially since this is one of the movies I know him best for.