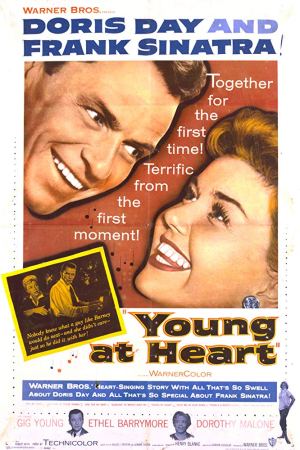 Plot:
The musical family the Tuttles are led by the widower father, Gregory (Keith), his three daughters Laurie (Day), Fran (Malone) and Amy (Fraser), as well as his unmarried sister Aunt Jessie (Barrymore). Their lives start to change as the daughters begin falling in love and getting married. Fran convinces herself that she is in love with and will marry Bob Neary (Hale Jr). Then young composer Alex (Young) comes to board with the Tuttles. Another guest turns the family upside down as well, the moody songwriter Barney Sloan (Sinatra). All of the sisters love Alex, but it’s Laurie that he wants to marry, but will she marry Alex if it hurts her sisters?

Trivia:
– A remake of “Four Daughters” (1938) starring Priscilla Lane, Claude Rains, John Garfield, May Robson, Rosemary Lane, Lola Lane, Gale Page and Jeffrey Lynn. Doris Day plays the Priscilla Lane Role, Frank Sinatra as John Garfield, Gig Young as Jeffrey Lynn, Ethel Barrymore as May Robson, Robert Keith as Claude Rains.
-Instead of having four sisters, like in the original, the remake has three sisters.
– Ethel Barrymore’s second to last film
-The title song “Young at Heart” performed by Frank Sinatra was named Billboard’s song-of-the-year
-Frank Sinatra didn’t like Doris Day’s husband Marty Melcher, because he felt he was using Day. Sinatra demanded Melcher be banned from the set, or he would walk off the picture, so Jack Warner banned Melcher from the set, according to Doris Day’s autobiography.
-Plans for the musical remake started in 1952, according to the Hollywood Reporter.
-Frank Sinatra refused to play the original ending, so it was changed to a happy one, according to Doris Day’s autobiography. 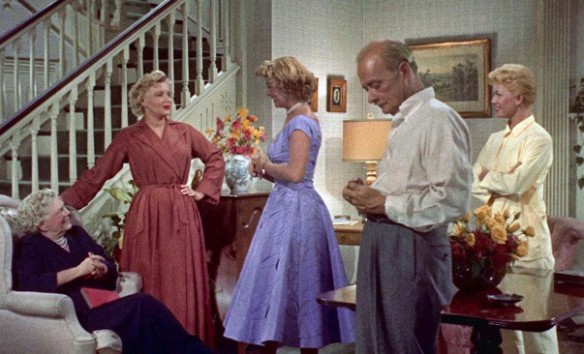 The whole family in Young at Heart

My review:
There are remakes and then there are musical remakes – which are a whole different ballgame. Someone in Hollywood says “This film would be improved with music!” and proceeds to adapt a script with songs and sometimes dancing (no dancing in “Young at Heart”).

Doris Day is one of my favorite actresses of all-time, and Frank Sinatra is one of the world’s greatest talents. And while I am a super-Doris Day fan and have seen all of her movies but one (Where Were You When the Lights Went Out), I’m not going to pretend that all of them were great. “Young at Heart” included. For some reason, Doris Day and Frank Sinatra lack chemistry, even though they sang on the radio pleasantly many times. But acting together as romantic partners? Mismatched for sure. This film doesn’t work for me, and (perhaps rightfully so) goes forgotten in Day’s filmography.

It’s hard not to compare it in my head to “Four Daughters.” It’s one of those remakes where the script is a line-for-line carbon copy in most spots of the original. I always find this pointless with remakes.

Here are a few comparisons:
-In the 1954 version, there are three sisters instead of four like in the 1938 film, as well as the Fannie Hurst story “Sister Act.”

-Doris Day goes on about how she loves Frank Sinatra’s character. In the 1938 version, Priscilla Lane likes John Garfield enough but is extremely unhappy with him.

-Then ending is also extremely different so that Frank Sinatra’s Barney Sloan would have a chance at happiness. The ending is sappy and happy. I don’t want to give away too many spoilers for those who haven’t seen either film.

Doris Day was even against the ending change saying it would have given Sinatra’s performance more dimensions and enhanced the film.

It’s also hard not to compare the actors who played in the original vs. the remake:
-Doris Day is a favorite of mine, but Priscilla Lane embodies the role of the youngest daughter better.
-Robert Keith as the father pales in comparison to Claude Rains. The 1954 script treats the father like window dressing.
-The other sisters in the 1938 film were played by Gale Page, Rosemary Lane, and Lola Lane. The 1954 film cuts one sister out and the sisters are played by Dorothy Malone and Elisabeth Fraser. Malone is a great actress but wasted here. Both of the sisters are forgettable in the remake, compared to Page and the real Lane sisters performing as sisters.
-May Robson always plays the matriarch to the hilt. Ethel Barrymore is usually a fantastic actress but she phones it in here. Most of the film, she makes strange expressions at people and says her lines without feeling. I wonder if it was because she was ill.
-As for the boyfriends: Alan Hale, Jr. plays the role Frank McHugh originated of the portly, unappealing rich boyfriend. Lonny Chapman plays the Dick Foran role and Gig Young plays Jeffrey Lynn’s role. I like Young, but he is no Jeffrey Lynn.

I don’t mean to bellyache about “Young at Heart,” but it just seems so pointless and bland. I hadn’t seen “Young at Heart” since high school until I recently rented it from DVD Netflix. I remembered not thinking it was great the first time I saw it, but didn’t remember it being that bad. It took me four days to get through it this time, and I followed up with a viewing of “Four Daughters” (1938) as a palette cleanser.

I’ll try to focus on the good aspects: It’s very colorful, is semi a Christmas film, and some of the songs are good like “There’s a Rising Moon for Every Falling Star.” Doris Day also acts well and sparkles and shines like she does in all of her other films.

But even my favorite actress can’t save this film or keep me from being disgusted over the desecration of the story of “Four Daughters.”