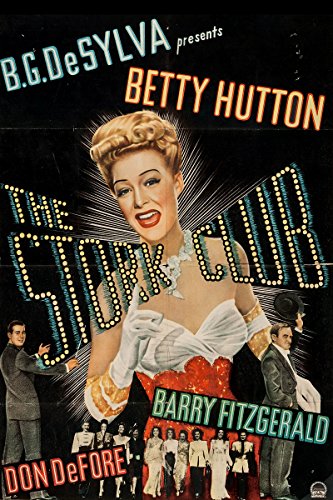 Plot:
Judy Peabody (Hutton) saves the life of Jerry Bates (Fitzgerald) who is drowning after he falls into the ocean. Judy thinks Jerry is poor and tries to get him a job, and doesn’t know that Jerry is really rich. To thank her, Jerry wants to provide for Judy financially without her knowing it’s from him. The problem is when her Marine boyfriend (DeFore), returns home from the war, he is suspicious of where she received the money and thinks the worst.

Trivia:
– Released Dec. 28, 1945
– Betty Hutton’s recording of “Doctor, Lawyer, Indian Chief” was the biggest-selling version of the song and was recorded June 29, 1945. The record first reached the Billboard magazine charts on Dec. 6, 1945, and lasted 17 weeks on the chart, peaking at No. 1
-Robert Benchley died a month before “The Stork Club” was released
-The first film made under Buddy DeSylvia’s Productions, Inc.
-Bill Goodwin plays Sherman Billingsley, the real owner of The Stork Club.
-Danny Kaye was considered for Betty Hutton’s leading man, according to the Hollywood Reporter in 1945
-Multiple photographs were taken of The Stork Club in New York City so the club could be recreated in Hollywood.
-Costumes designed by Edith Head. 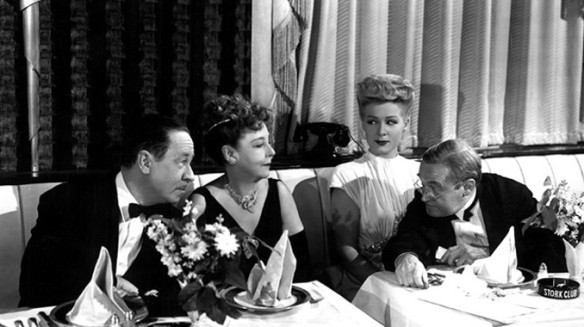 Highlights:
– The owner of the Stork Club mentions actors like Dorothy Lamour, “Ruby Stevens” (Barbara Stanwyck), and Robert Taylor, not knowing they are stars

My review:
I know everyone has their opinions of Betty Hutton, but I for one am I fan. I love her energy and goofiness.

“The Stork Club” showcases her comedic talents and energetic songs, but also that she could send a soft and lovely ballad. She also looks particularly lovely in this film with long, fluffy blond hair and lovely costumes designed by Edith Head.

By the time “The Stork Club” was released in December 1945, Hutton was already an established movie star. A highlight of the film is her performance of “Doctor, Lawyer, Indian Chief.” Hutton’s recording of the song was the best selling of this song.

“The Stork Club” is a goofy and silly plot, but it’s a fairly cute film. Hutton assumes Barry Fitzgerald is a hobo and he secretly gives her money for saving his life. Giving her money causes problems, because her boyfriend Don DeFore automatically assumes the worst.

It’s truthfully a little ridiculous that Don DeFore is jealous of Barry Fitzgerald and it’s frustrating that he never believes her when she attempts to tell the truth.

One sad note is that Robert Benchley, who has a small role in the film as Fitzgerald’s lawyer, died Nov. 21, 1945, a little over a month before this movie was released. Along with “The Stork Club,” Benchley was in two other films and one short released after his death.

While this movie is fairly cute, the best part about “The Stork Club” is the music. It’s an entertaining, light film and is a pleasant way to spend 98 minutes.