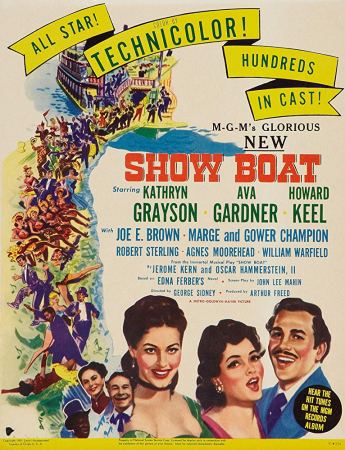 Plot:
Set in the 1880s, the Cotton Blossom Show Boat is run by Capt. Andy Hawke (Brown) and his wife Parthy (Moorehead). When the boat arrives in a Mississippi town, there’s trouble for the show’s leading lady Julie Laverne (Gardner) and her husband, Steve Baker (Sterling). In revenge for Julie turning him down, riverboat worker Pete (Erickson) tells the sheriff (Toomey) that the boat has a case of miscegenation, an interracial relationship. Julie is part black, and Steve is white, and even though he cuts her hand and sucks some of it out, the two are forced out of town by the law. In a hurry to replace their leading lady and leading man, Capt. Andy recruits his daughter Magnolia (Grayson) and a gambler Gaylord Ravenal (Keel), who was seeking passage on the boat. Magnolia and Gaylord get married, though her parents object, and the two move to Chicago, where Gaylord hopes to keep them living on velvet through gambling. However, his luck soon sours.

Trivia:
• One of three versions of “Show Boat” made. The other two were released in 1929 and 1936. The films were based on Edna Ferber’s book, “Show Boat,” and the 1927 Broadway musical with music by Oscar Hammerstein II and Jerome Kern.

• Judy Garland and Dinah Shore were considered for the role of Julie. Dore Schary wanted Dinah Shore for the role, but Arthur Freed convinced her that people would not find her believable as the character, according to the book Ava Gardner: “Love Is Nothing” by Lee Server

• The Mississippi River in the film was the same lake used for MGM’s Tarzan films starring Johnny Weissmuller. Arthur Freed wanted to film on the Mississippi River, but it would be too expensive, according to “Only Make Believe: My Life in Show Business” by Howard Keel.

• The boat, the Cotton Blossom, was a fully built paddle boat and cost more than $126,000 to make. During the film, the oil tank caught on fire, and it cost $67,000 to repair. The boat was left to rot on the backlot and wasn’t salvaged and was only discovered in the 1970s, according to Keel’s book.

• MGM had planned to remake “Show Boat” since 1942, and Jeanette MacDonald and Nelson Eddy were originally considered as the leads, according to a 1942 Hollywood Reporter article.

• Kathryn Grayson was announced as a potential actress to play Magnolia as early as 1944 with Judy Garland as Julie, according to the Hollywood Reporter. Grayson and Lena Horne both acted in a “Show Boat” vignette in the film “Till the Clouds Roll By” (1947)

• In the number “I Might Fall Back on You,” Marge Champion, Gower Champion perform 57 hitch kicks at the end of the number, according to Gilvey‘s book.

• Though Ava Gardner rehearsed and practiced the songs “Bill” and “Can’t Help Lovin’ Dat Man,” she was dubbed by Annette Warren. Though her voice was okay, it was too big a contrast from Keel and Grayson. Gardner’s voice ended up on the record because her name couldn’t promote the record without her actually singing on it, according to Server’s book.

• Film censor Joseph Breen wrote Louis B. Mayer when he heard that MGM would be producing “Show Boat” (1951), warning them about the miscegenation (sexual relationship between black and white) plotline with Julie and her husband, which would be forbidden on-screen. But since the 1936 version of “Show Boat” included the plotline, the relationship stayed in the film, according to “Ava Gardner: A Life in Movies” by Kendra Bean and Anthony Uzarowski.

Highlights:
• The beginning when the boat rolls in with everyone playing tambourines
• “Ol’ Man River” sequence

My review:
“Show Boat” is a story that has been told in many different ways over the years.

The musical was then immortalized on screen a few times. First in 1929, starring Laura La Plante and Joseph Schildkraut. It was filmed as a silent as an adaptattion of Ferber’s book, and then musical sequences were added in.

Then it was released as a musical in 1936, starring Irene Dunne, Allan Jones and Helen Morgan. This version is considered the one that follows the original play and spans 40 years — ending in the 1920s when Magnolia and Gaylord’s daughter Kim is a Broadway star.

Then audiences got a small taste of what MGM could offer if the studio released “Show Boat” in the Jerome Kern Technicolor biographical musical film, “Til the Clouds Roll By” (1946). Kathryn Grayson played Magnolia, Tony Martin played Gaylord and Lena Horne played Julie Laverne.

Lena Horne as Julie Laverne in “Till the Clouds Roll By.”

Then came the film we are here to review: the 1951 MGM version of “Show Boat.” Produced under the lavish Arthur Freed Unit, the film was one of MGM’s top money makers of 1951 and was more successful than either the 1929 or 1936 versions.

Kathryn Grayson reprised her role as Magnolia from “Till The Clouds Roll By,” but she was the only actor from that vignette that was able to.

The role of Julie Laverne, a woman with a black mother and white father, was one Lena Horne longed to play and she had great hopes after performing in the “Til the Clouds Roll By” excerpt; feeling this was an audition and she had the role in the bag, according to her biography “Stormy Weather: The Life of Lena Horne” by James Gavin.

However, when planning for the film started, Arthur Freed and George Sidney wanted Judy Garland. Though Horne says in the 1994 “That’s Entertainment III” that she was considered for the 1951 version, George Sidney said in a 1982 interview that he never considered Lena Horne for the part, according to Gavin’s book.

“The production code banned interracial romance on the screen, so the studio gave the part to my good friend, Ava Gardner,” Horne says in “That’s Entertainment III” (1994).

Even though MGM had to fight to keep the miscegenation plotline in the story, the Production Code ruling of “no interracial relationships” didn’t just mean in plot lines, it also meant with actors.

Judy Garland wasn’t cast, Dinah Shore was considered for the role, but Ava Gardner was the final pick for Julie Laverne.

“Though she was one of my few good friends, I was deeply disappointed that I didn’t get the part,” Horne said on “That’s Entertainment III.”

It’s unfortunate that Lena Horne was unable to play the role of Julie Laverne, because she would have been great. This final kick in the teeth made Horne cancel the remainder of her MGM contract in 1950, which had 13 months left to go. Her last film appearance under contract for MGM was in “Duchess of Idaho” (1950) as a specialty singer, the roles MGM usually gave her, and she wasn’t in another film until 1956 in “Meet Me in Las Vegas,” again as a specialty singer. After that, she didn’t act in a film again until 1969.

The issue of Julie Laverne didn’t end with Lena Horne.

Julie has two songs in the film, “Bill” and “Can’t Help Lovin’ Dat Man of Mine.” Gardner worked hard practicing both of the songs. During practices, the studio had Ava singing/mouthing to the recordings Lena Horne made when Horned hoped to get the part “which annoyed us both,” Horne said on “That’s Entertainment.”

However, in the end, Ava Gardner was dubbed by singer Annette Warren. Gardner wrote in her autobiography that MGM ran her so ragged over determining if she would sing or not, that she could never forgive them. 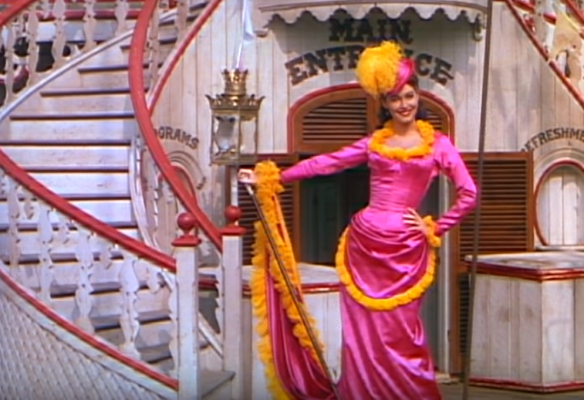 Gardner also didn’t feel like Warren’s singing voice matched her’s speaking voice, as Eileen Wilson’s had, who was the only other singer to dub Gardner.

“My southern twang stops and her soprano started — hell what a mess,” Ava wrote.

When you listen to Ava Gardner’s own singing in comparison to Warren’s (Gardner’s recordings aren’t hard to find on the internet and are available on the released soundtrack), you hear that MGM made a mistake. Gardner’s voice isn’t as robust as singers like Judy Garland or Warren, but she sings well, and her tone matches the tortured soul of Julie Laverne. My only criticism is that “Can’t Help Lovin’ Dat Man” is a little low in places for Gardner.

Marge Champion, who co-starred in “Show Boat” said “it (Ava’s singing) worked perfectly; everyone thought so when they watched her do it. She was this character, drunk and depressed, and sounded just like that character would, this sad romantic woman born on the levee. Today they never would have taken her voice off the film. Back then they were so concerned that everyone had to be perfect.”

The funny thing is the role of Julie Laverne is only on screen for roughly 30 minutes, but she does play the integral role of bringing the characters of Magnolia and Gaylord together, played by Kathryn Grayson and Howard Keel. Laverne is also probably the most interesting role in the story.

Laverne’s husband, played by Robert Sterling, is only on screen for maybe 10 minutes. I do want to know more about what transpired between the two of them!

Kathryn Grayson and Howard Keel’s characters of Magnolia and Gaylord are directed on stage by Joe E. Brown as Capt Andy. Agnes Moorehead, as Parthy, looks on disapprovingly.

The two leads of Magnolia and Gaylord, played by Kathryn Grayson and Howard Keel, arguably had the two of the best voices at MGM (no seriously, Mario Lanza and Howard Keel had a friendly competition over their voices). Their singing styles match beautifully with the “Show Boat” score, and they have great chemistry. According to Howard Keel’s autobiography, “Only Make Believe: My Life in Show Business,” Keel and Grayson had chemistry off-screen too. Keel wrote that he and Grayson fell in love while they made this film, however, he was married with a second baby on the way, and Grayson was going through a divorce. Being together would hurt too many people, Keel wrote.

One of the other real highlights—and really my favorite thing about “Show Boat”—are the three performances by real-life married dancers Marge and Gower Champion. Gower Champion, who was also a choreographer, liked the opportunity at MGM because it allowed him to tell stories with their dances. Watching Marge and Gower dance together is such a marvel since they were each other’s partners in real life and frequent dance partners, you can see their chemistry and how they can predict what the other is about to do. Each step flows perfectly into the next. Their numbers are also so fun!

While they are relatively minor characters, Joe E. Brown and Agnes Moorehead are both delightful and quite funny in “Show Boat.” Brown’s character is always ready to have fun and be happy, while Moorehead is the wet blanket, in the best possible way.

Outside of the performances, “Show Boat” is darn gorgeous to look at. The film begins with the boat rolling in and all the performers playing tambourines, and frankly, that’s the most thrilling scene of the movie to me.

While “Show Boat” is a musical gorgeously shot in Technicolor, it also is a little deeper than that. It deals with love and loss, and how people deal with tragedy, and also racial prejudice. The story of “Show Boat” is fairly complex—how interracial marriage was illegal, a girl’s mother disowning her because she marries a gambler, a husband with a gambling problem who won’t get a real job. Very little about this story is as happy-go-lucky as other 1951 MGM musicals like “Royal Wedding” or “An American in Paris.”

I hadn’t watched “Show Boat” in several years, and remembered feeling lukewarm towards it. Revisiting it and delving into the history, I found that I appreciate it more.