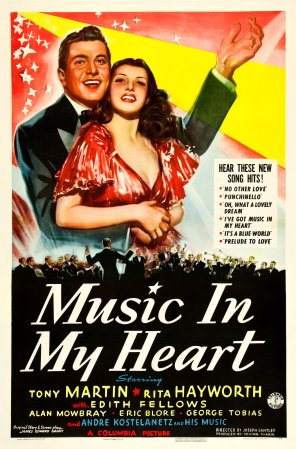 Plot:
Hopeful musical understudy Robert Gregory (Martin) is going to be deported. He’s given a chance to be the lead in a show as long as he gets on a boat at 12 a.m. His taxi wrecks with another taxi with passenger Patricia O’Malley (Hayworth) who is racing to meet the same boat to marry a millionaire (Mowbray). When they both miss the boat, Patricia takes in Robert and her younger sister (Fellows) tries to play matchmaker while Robert is avoiding being deported.

Trivia:
• Rita Hayworth’s first starring role
• Working title was “Passport to Happiness”
• Julietta Novis, who sings opera with Tony Martin, was only in two films and this was her first.

Awards and Nominations:
• Chet Forrest and Bob Wright were nominated for an Academy Award for Best Music, Original Song for the song “It’s a Blue World.” 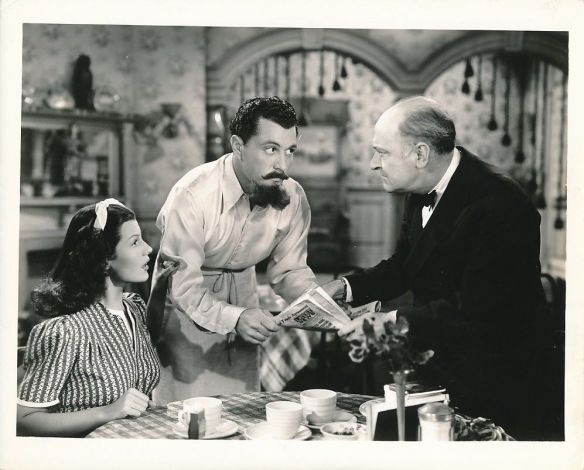 Rita Hayworth, Tony Martin and Eric Blore in “Music in My Heart”

But in 1940, while both Hayworth and Martin had already acted in several films, neither had hit it big yet. While “Music in My Heart” isn’t a spectacular film, but it helped kickstart both careers of Martin and Hayworth.

In the film, Martin plays a hopeful actor who will get deported, and Hayworth who has lived in a one-room home most of her life wants to marry a millionaire. They both miss a midnight boat, which ruins Hayworth’s plans and puts Martin in bigger trouble of getting arrested by the feds.

Martin sings a few songs along the way in this musical, but Rita Hayworth only does one small dance around the room and no singing (or dubbed singing).

However, while Rita wasn’t quite THE Rita Hayworth that she later became, your attention is on her in this film. Hayworth’s character is funny, a snappy talker and beautiful. “Music in My Heart” was Hayworth’s first leading role, and only because co-star Tony Martin requested her for the role, according to an article by Jeremy Arnold. Prior to this film, Hayworth played bit parts and supporting character with her only large budget film as a supporting character in “Only Angels Have Wings” (1939) the year before.

Tony Martin had also been performing in films since 1935, and also the name as Anthony Martin, but the main thing he was known for at this time was being married to 20th Century Fox’s top star, Alice Faye. But following “Music in My Heart” (1940), Martin was then Hedy Lamarr’s romantic lead in Metro-Goldwyn-Mayer’s top dollar film, “Ziegfeld Girl” (1941).

Child star Edith Fellows also is featured in “Music in My Heart” as Hayworth’s scheming younger sister. But Fellows is no longer a child, she’s lovely at 17.

George Tobias is also featured in the film as a neighbor who dreams of Russian royalty and the Romanovs taking power again in Russia. The film also has hilarious character actors Alan Mowbray as Hayworth’s fiance and Eric Blore as his manservant.

I revisited “Music In My Heart” by renting it through DVD Netflix and was impressed that it had a great picture. The film was much more fun than I remembered.

If you are looking for Gilda-era Rita Hayworth, this won’t be your film. But this is Rita right before she hit it big, and you can already tell she has something in this film.

Disclaimer: I subscribe to DVD Netflix and hoearn rewards from DVD Nation.