With bright blue eyes and a soprano singing voice, Jane Powell won over audiences with her first screen appearance in 1944.

She became one of Metro-Goldwyn-Mayer’s top musical starts from 1946 to 1955 — every one of her movies was filmed in Technicolor. Her co-stars were other bright new stars from “Holiday in Mexico” (1946) with Roddy McDowall to “Two Weeks with Love” (1950) with Riccardo Montalban.

But as the studio system declined and musicals failed to reign supreme, Powell’s career declined too. The last time movie audiences saw her in a starring role in a feature film was in 1958 in “Enchanted Island.”

But rather than a singing sweetheart, Powell dons a long black wig, a sarong and a tan as she plays a Typee woman who lives on a South Sea Island.

Set in 1842, a ship stops at a South Sea Island. Sailor Abner Bedford (Dana Andrews) is belligerent with the captain (Ted de Corsia), because the sailors are refused shore leave. The captain eventually relents, but Abner argues with the captain when he disapproves of drinking and carrying on with the native women; warning Abner and the crew that anything beyond the shore is dangerous.

After a fight, Abner jumps ship and sailor Tom (Don Dubbins) tags along. Abner’s intentions all along were to escape the ship, because he wants to be a free man.

Abner and Tom travel deeper into the island jungle and come across a tribe, the Typees, who are rumored to be cannibals. Abner falls in love with one of the Typees, Fayway (Jane Powell). The two are going to marry and Tom disapproves, believing that Abner needs to return to Western Civilization.

Tom runs away to return to civilization, and Abner and Fayaway live happily together. However, their happiness fades when Abner believes the Typees are watching him — making him feel less free — and he also has suspicions about what happened to Tom.

Jane Powell was initially “thrilled” to be asked to star in “Enchanted Island,” because she didn’t have to sing, she wrote in her autobiography “The Girl Next Door and How She Grew.”

“I was to do something different, and even more important, I got to die at the end! If anything was going to establish me as a serious actress, I thought dying out to do it,” Powell wrote.

However, the film and experience weren’t quite what she hoped for — and her character didn’t end up dying (though the ending is a bit ambiguous, she still could die). 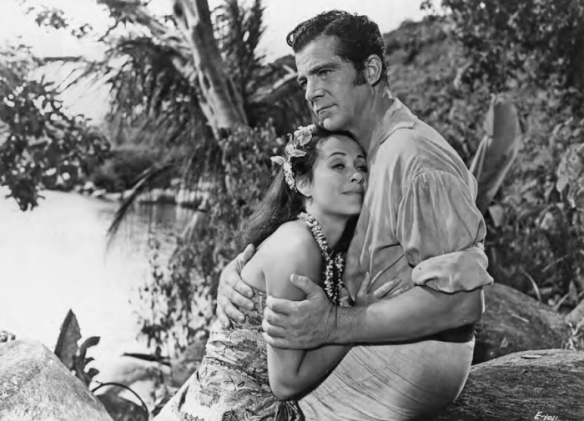 “I played a dark-haired, supposedly dark-skinned native princess on a South Sea island,” Powell wrote. “(My blue eyes explained away by mentioning a Swede who years before visited the tribe!) Since the blue eyes were one of the script’s high points, Enchanted Island, as you can imagine, was a really terrible movie.”

Powell’s character of Fayaway speaks little English, particularly at the beginning, and speaks broken English with Abner towards the end.

Powell didn’t mention much about Dana Andrews in her book, other than that Andrews and director Allan Dwan seemed “thoroughly bored” with the film.

Truthfully, the viewer will be “thoroughly bored” as well.

“Enchanted Island” is mostly disappointing, because the leads are miscast. It is a far cry from Dana Andrews’s role in films like “Laura” (1944) or “Best Years of Our Lives” (1946). And to be Jane Powell’s last feature film is just depressing.

While the film laid an egg, it did have a theme song performed by the Four Lads that made it to No. 12 on the charts.

To be fair, the Technicolor is visually beautiful as well as the filming location of Acapulco, Mexico. It’s really just simply a really dull film. Which is really no fault of the actors, the script they were given isn’t very exciting.

Jane Powell remembered “Enchanted Island” mainly “vacation with pay” since she brought her children along.

“It was worth making the movie just to have the children with me and see them having such a good time.”

“Enchanted Island” (1958) is based on Herman Melville’s 1846 novel “Typee,” which is based on Meville’s own experiences. This novel was also the basis of an earlier film, “Last of the Pagans” (1935) directed by Richard Thorpe and starring Mala and Lotus Long. However, “Enchanted Island” and “Last of the Pagans” have very few similarities, other than the fact that they are both in tropic locations.